Post September 11, the real story about Spiderman is in all that got snipped—the shots of the WTC that got excised, leaving in just the isolated spire of the Empire State Building. 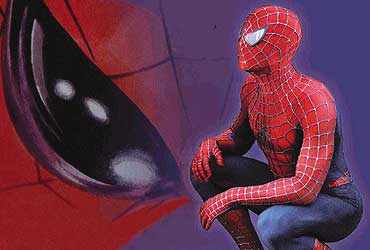 It's a coming-of-age story like none other, of a boy who became a spider who spins his way into manhood. An all-American myth shooting right out of Stan Lee's silver age of comics and its subsequent animated TV series in the '60s. In Sam Raimi's film, strangely enough, the popular Spiderman theme song gets pushed to the end—the time when people rushing out might not hear the words which put the webbed hero in context, that "he's got radioactive blood". A throwback to the time when commies were the bad guys with uranium in the '60s. Since it's now bio-terrorists and anthrax who're the enemy, the arachnid in this flick who bites Spidey is engineered genetically.

Post September 11, the real story about Spiderman is in all that got snipped—the shots of the WTC that got excised, leaving in just the isolated spire of the Empire State Building that fills the screen in the film's first frames. Reminding 20 million Americans on the film's opening weekend on May 3 to mourn for all that has been lost—even on the celluloid skyline. Recanting Uncle Ben's avuncular warning, "Remember that with great power comes great responsibility", in the fight against the Green Goblin, played by William Dafoe. Words that remind the world of US President George W. Bush standing on the steps of the White House on September 12 promising to rid the globe of all terror.

It's enough to make you ask, "is this why this blockbuster has been the fastest-ever release in English and Hindi?", hoping that Indians too will salute Spiderman hoisting himself up like the American flag in the final shots? C'mon, tell us the truth, about the real battle for audiences this summer, between George Lucas' Star Wars and Sam Raimi's comic-book superhero. Let's talk about Hollywood's repartee to Bollywood's favourite scene with the wet saree—where Kirsten Dunst in a pink T-shirt half pulls off Spiderman's mask from his inverted face and locks his lips in a long, drippy kiss.

Raimi and Co could have spent on stars but they didn't. Toby Maguire as Spidey came cheap at just $4 million, unlike the other famous actors cast as in superhero flicks like Jack Nicholson, Michael Keaton and Christopher Reeve. Kirsten Dunst as the girl-next-door, besides the wet kiss, is totally wasted as the director takes one of the greatest gambles on the sequel by getting Spiderman to walk away from the girl he loves, without consummating the affair, for now "great power comes with great celibacy". But the romantic script can change in the sequel—Spidey's best buddy now is his worst enemy. Stay glued, if you want to.