Spider At The Centre 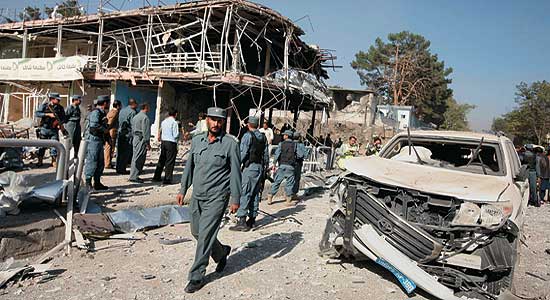 WikiLeaks, a website with the stated aim of publishing leaked documents and hosted by a Swedish ISP, has published 90,000 raw intelligence documents on Afghanistan. Among the revelations are the following:

Most officials and analysts familiar with the nature of the leaked US military field reports that reveal in startling detail the level of collusion between the ISI and militant groups fighting in Afghanistan agree on one thing: There are no surprises. WikiLeaks.org, a website that publishes leaked documents, gave The New York Times, The Guardian and German magazine Der Spiegel unfettered access to more than 90,000 raw intelligence reports from Afghanistan. These documents affirm what many in the US administration and the chambers of Congress have been saying for long: the ISI is hand in glove with the Taliban. The reports, dated January 2004 to December 2009, say ISI officials had even been holding strategy sessions with terrorists to plot attacks on US troops and assassinations of Afghan leaders. They say Polish intelligence had warned of an attack on the Indian Embassy in Kabul a week before the July 7, 2008, bombing. Indian and Afghan intelligence too had concluded the blast was the handiwork of the ISI.

One document, from August 2008, identifies an ISI colonel who worked with a Taliban official on a plot to assassinate President Hamid Karzai. There are others indicating that Lt Gen Hamid Gul, who ran the ISI from 1987-89, remained a key contact for the Taliban after retirement and actively supported the militants. Reports made public on July 25 also reveal a programme by ISI officers to direct and support suicide bombers in Afghanistan in 2006. Intelligence analysts caution that the data is raw and should be treated as such. 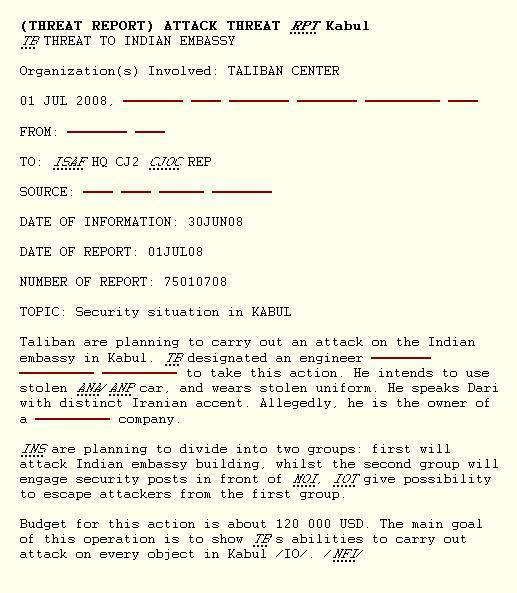 George Friedman, CEO of intelligence gathering firm Stratfor, notes  that the ISI’s relationship with the Taliban is already widely known. In his analysis, he says: “The leaks on this score are interesting, but they will shock only those who didn’t pay attention.” Pakistani assistance extends also beyond the Taliban to the allied Haqqani Network, run by Jalaluddin Haqqani and his son Sirajuddin, as well as the Lashkar-e-Toiba, as revealed by David Coleman Headley, the Pakistani-American who has confessed to having helped LeT plot the 2008 Mumbai attacks.

“The US does not seem to be able to forge a policy consistent with its long-term interests in the region.”
Sumit Ganguly, Indiana University

At a congressional hearing on July 27, David Kilcullen, a former counterinsurgency advisor, former secretary of state Condoleezza Rice, and Gen David H. Petraeus, who has shifted from helming the war in Iraq to the one in Afghanistan, said the Haqqani Network is acting at the behest of its Pakistani puppet masters. Ruling out US or Afghan negotiations with the Haqqani Network, Kilcullen said, “If you negotiate with the organ grinder’s monkey, you may as well negotiate with the organ grinder himself.” He explained that there was “considerable collusion” between the Haqqani Network and “elements within some parts of the security establishment in Pakistan”.

Pakistani officials deny the link still exists. In a statement, Husain Haqqani, Pakistan’s ambassador in Washington, said the documents on WikiLeaks “do not reflect the current onground realities”. But not everyone is buying that.

Bruce Riedel, a former CIA officer, led a review of US policy in Pakistan and Afghanistan at the request of President Barack Obama. He noted that a former chief of Afghan intelligence had publicly confirmed that the isi connections to the Taliban are still in place, that the Taliban leadership is in Karachi and that the ISI has tremendous influence with the Taliban. Riedel, who is currently a senior fellow at the Brookings Institution’s Saban Centre for Middle East Policy, told Outlook the Obama administration had from its first days understood the nature of Pakistan’s connections to the Taliban.

As recently as June, Matt Waldman, who’s at the Carr Centre for Human Rights Policy at Harvard University’s Kennedy School of Government, published a damning report that laid bare extensive links between the ISI, the Taliban and the Haqqani Network. “Although the Taliban has a strong endogenous impetus, according to Taliban commanders the ISI orchestrates, sustains and influences the movement. It gives sanctuary to both Taliban and Haqqani groups, provides support in training, funding, munitions, and supplies,” Waldman wrote. He says, in their words, it’s “as clear as the sun in the sky”.

“The Obama regime has recognised from its first days the links and influence of Pakistan’s ISI with the Taliban.”
Bruce Riedel, Ex-CIA analyst

According to Waldman, Taliban and Haqqani Network commanders say the ISI controls their most violent units. Insurgent commanders confirmed that the ISI is even represented, through participants or observers, on the Taliban supreme leadership council, known as the Quetta Shura, and the Haqqani command council. Waldman even contends that Pakistani President Asif Ali Zardari had assured captive senior Taliban leaders that they have his backing. He writes that Zardari had also apparently authorised these Taliban leaders’ release from prison. The ISI arrested and then released two Taliban leaders, Qayyum Zakir, the movement’s new military commander, and Mullah Abdul Raouf Khadem, who are among the three or four highest ranking in the movement below Mullah Omar.

Sumit Ganguly, director of research of the Centre on American and Global Security, Indiana University, Bloomington, says this strategy is “consistent with the narrow vision the Pakistani strategic elite has about its interests in Afghanistan. They believe the costs of working with Sirajuddin Haqqani and his ilk are controllable and calculable”. 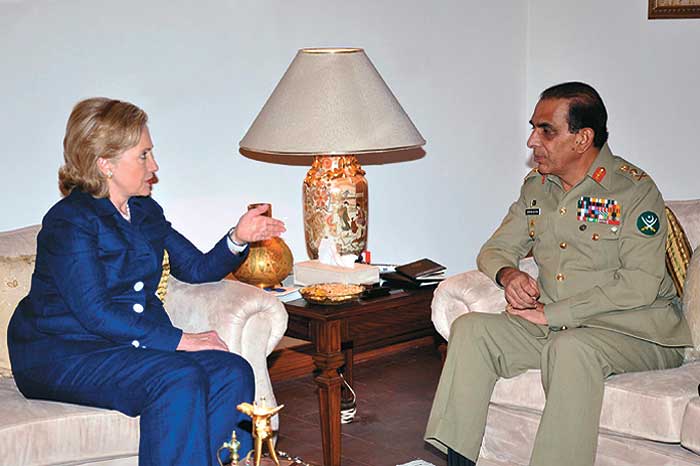 The leak proved fleetingly embarrassing for the Obama administration, which promptly swung into damage-control mode. A congressional aide, speaking on the condition of anonymity, said the disclosures had created “unintended diplomatic consequences”. On the eve of the media blitz, the White House pressed senior administration officials into action. Their mission? Assuring the Pakistani leadership that the leaked documents would not damage US-Pakistan relations. Richard Holbrooke, the US special envoy for Pakistan and Afghanistan, who on a trip to New Delhi in July had said that links between the ISI and the Taliban are a problem, got on the phone with Zardari. The US ambassadors to Pakistan and Afghanistan were also part of the effort to coddle Pakistan.

The Obama administration is standing by Pakistan, but is under no illusions  on the role this ally is playing in Afghanistan. Riedel says that, like India, the US understands there is no alternative to engagement with Pakistan.

Lt Gen Hamid Gul (left), who headed the ISI in 1987-89, remained the key ISI link to the Taliban after his retirement.

A US official speaking on condition of anonymity said the Pakistanis had made possible “many of our greatest victories against Al Qaeda and its allies, either through active cooperation or by permitting us to take action”. But the US no longer wears rose-tinted glasses. “While they’re absolutely critical partners, there are times when their interpretation of their national interests does not square  with ours,” the official says. “It’s not as if they’re helping us on the one hand and killing us on the other. But they’re not beyond using select extremist groups either to build up their own influence in Afghanistan or to counter Indian influence there. It’s a rough, complex neighbourhood, and it always will be their neighbourhood.”

On Capitol Hill, lawmakers are fuming in private while offering more nuanced public statements. A handful of senators, including John Kerry, demand a fine-tuning of US policy on Pakistan. But the administration has been quick to point out that the documents cover a period that ended December 2009, which was when Obama unveiled a new Afghanistan strategy, one they say addresses concerns raised in the leaked reports.

Senator Russ Feingold, a Wisconsin Democrat, says the documents highlight what  he described as a “fundamental strategic problem”, namely “that elements of the Pakistani security services have been complicit in the insurgency”. Senator Carl Levin, Michigan Democrat and chairman of the Senate Armed Services Committee, said in a strongly worded statement that some of the documents reinforce long-standing concerns of his about the “supporting role” of some Pakistani officials in the Afghan insurgency.

In comparison with their Democratic colleagues, Republican lawmakers have been conspicuous by their silence on the matter. A spokesman for Senator Richard Lugar, Indiana Republican and co-chairman of the Senate Foreign Relations Committee, said the senator would not be commenting on the leaks. Lugar, along with Kerry, lent his name to legislation (the Kerry-Lugar bill) that provides Pakistan $7.5 billion in non-military aid over the next five years.

Ganguly says the Obama administration is pursuing a muddled set of policies despite being aware of Pakistani linkages to militants. “Most of our administrations have either been too stringent (when we did not need the Pakistanis) or far too indulgent (when we needed them),” Ganguly says. “We simply cannot seem to forge a policy that is clear-eyed and consistent with our long-term interests and concerns in the region. The Obama administration, sadly, is proving to be no exception to this proposition.”

His Life Was The Method