Ask someone to name some of the newly elected MLAs of the Aam Admi Party (AAP). Chances are that most will throw up only the names of Arvind Kejriwal and Manish Sisodia. For a party that has been feted for its stellar debut at the hustings with a total of 28 out of Delhi's 70 seats, there’s one question people can’t help but ask: Who are the 26 other MLAs?

Turns out that true to their party’s identity, they are aam indeed. Here’s a sampling—Rakhi Bidlan (former journalist), Somnath Bharti (a lawyer and IIT postgraduate), Dharmendra Singh Koli (a social worker and long-time associate of Kejriwal), Surender Singh (ex-NSG commando), Raju Dhingan (an ex-CISF personnel), Sanjeev Jha (a social worker who, like a few other MLAs, describes himself as “dependent on friends and family”) and Prakash (a social worker and who at 25 is the youngest of the lot).

All of the newly elected are offshoots from the larger India Against Corruption movement, which they had joined. Their entry into the thick of politics is something that has demolished conventional barriers of entry that were built around lack of financial muscle and the absence of right connections in the entrenched power structure. It has also done away with the cynicism that reined in the willing and motivated. For many voters who have seen these people work amidst them as social workers, and hope they continue to do the same as MLAs, it is a fresh overhaul from the days of earlier MLAs who were rarely seen around after their election. This promise to be seen more often is being reiterated by all AAP MLAs. 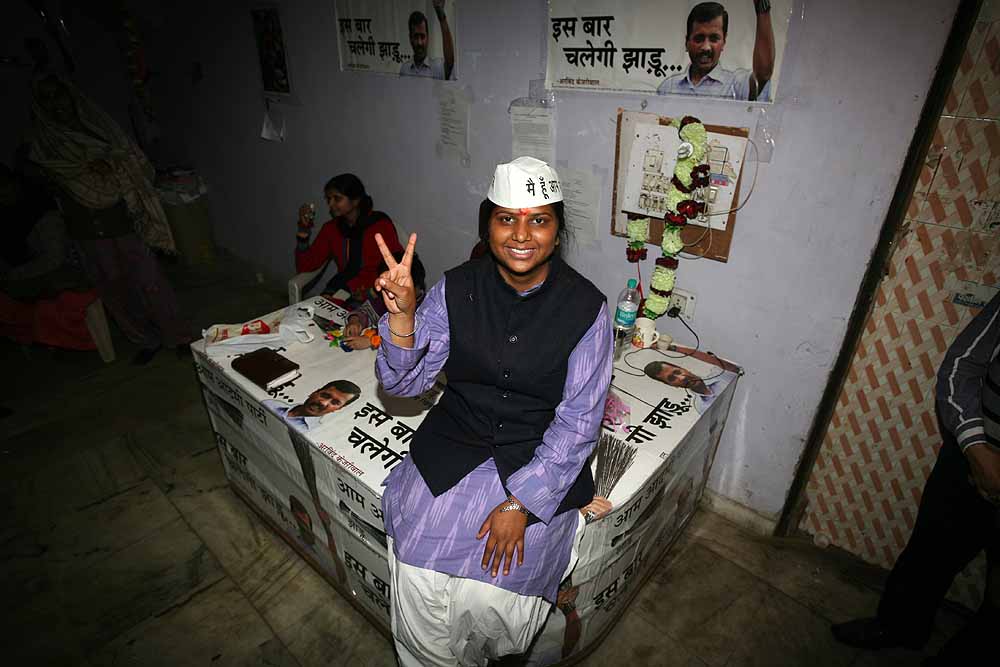 Rakhi Birla, a former journalist with a private news channel, trumped three-time Congress MLA and minister Raj Kumar Chauhan, who was indicted by the Delhi Lokayukta in a land-grab case. The 25-year-old defeated Mr Chauhan by a margin of 10,585 votes in the Mongolpuri constituency in north Delhi. (Photograph by Sanjay Rawat)

Out on a rally to thank his voters in the Malviya Nagar constituency on Tuesday afternoon, Somnath Bharti says he will hold monthly meetings to hear from locals about their problems. “Between me and my people, there won’t be any personal assistant. There will also be a 24x7 helpline,” says Bharti, a mathematics postgraduate from IIT Delhi. The established disconnect between the elected and voters, along with his pledge to bring the two closer, is something that contributed to his unexpected victory. The former IT consultant, who now works as a lawyer in the SC, defeated former Delhi education minister and MLA Kiran Walia by over 11,000 votes. “There was not even possibly one visit and the local problems still remain unsolved. While the area has a drinking water problem, the former MLA went around putting up decorative lights,” he adds.

About 25 kms away in Mangolpuri, an assembly constituency in Delhi’s extreme northwest, dotted with shoe factories and littered with their waste, the newly elected MLA Rakhi Bidlan made a similar pitch to her voters. On her campaigns in this constituency markedly poor than Malviya Nagar in the city’s south, she would often get asked by voters why she deserved their vote. “We told them how all those they voted for never really came amidst them and convinced how we are different,” says Bidlan, who defeated four-term Congress MLA Raj Kumar Chauhan by over 10,000 votes and while on a ride to the local temple after a daylong session of media interviews and receiving well wishers. From a modest lower middle class family (her father runs a charitable trust and her mother is a safai karamchari at a local government school), Bidlan gave up her job as an assistant producer with Jain TV to plunge headlong into IAC’s campaign. “Hum sidhey ghar se mooh uthake to nahin chaley aaye hain. Rasto pe dandey khaaey hai humney,” she adds, a reference to her involvement in many popular agitations. 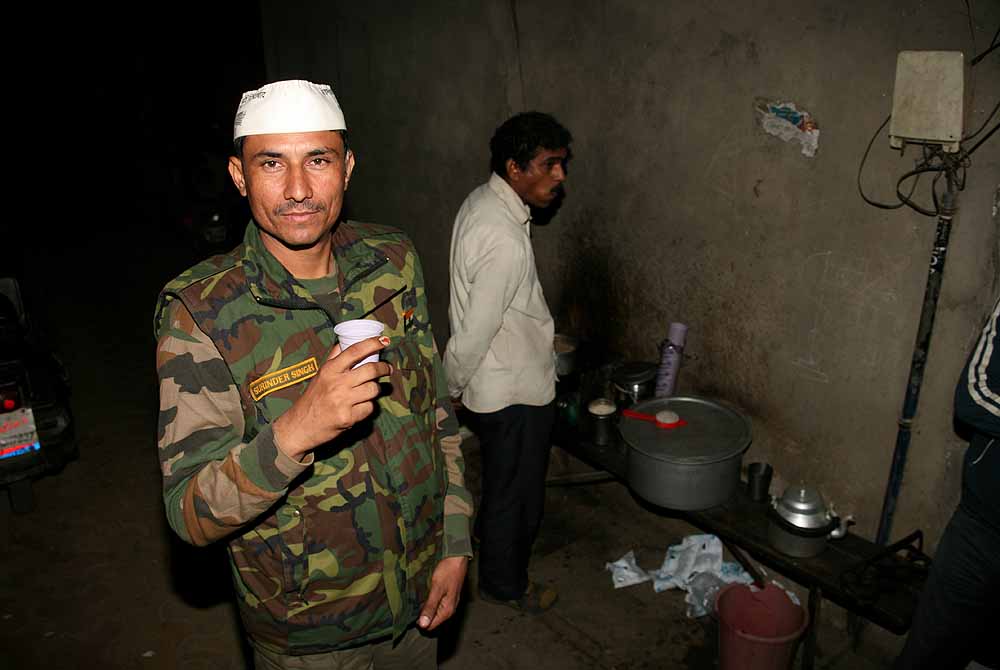 This shouldn’t pose a problem for these candidates, who have won in part because of a lot of footwork in their constituencies. Run on limited budgets—Bharti claims he spent under Rs 6 lakh—their campaign involved a lot of door-to-door canvassing and public interaction. Most have had their offices run out of rented shops and basements.

And to accentuate their popular character, there’s ample talk of demolishing the “messiah structure” of politicians. “People want those eyes they can look into and believe that this guy is worth my vote. My effort would be to tell them I am one of them,“ says Bharti. This gospel is something that gets repeated at every gathering. At AAP’s victory rally at Jantar Mantar on Wednesday, Bharti launched another attack on the VIP culture that many of our politicians take for granted. “The MLA is not a VIP. If there is any VIP, it is the common man. The MLA is a servant of the common man and is here to serve him or her. We will show how this is done,” he said, eliciting a roar of approval and applause from the crowd. And just so that everyone got to know of the plebeian roots of its MLAs, its leader Kumar Vishwas announced from the stage, where some of its newly elected MLAs were seated, how many others had chosen to sit with their workers amidst the crowd. 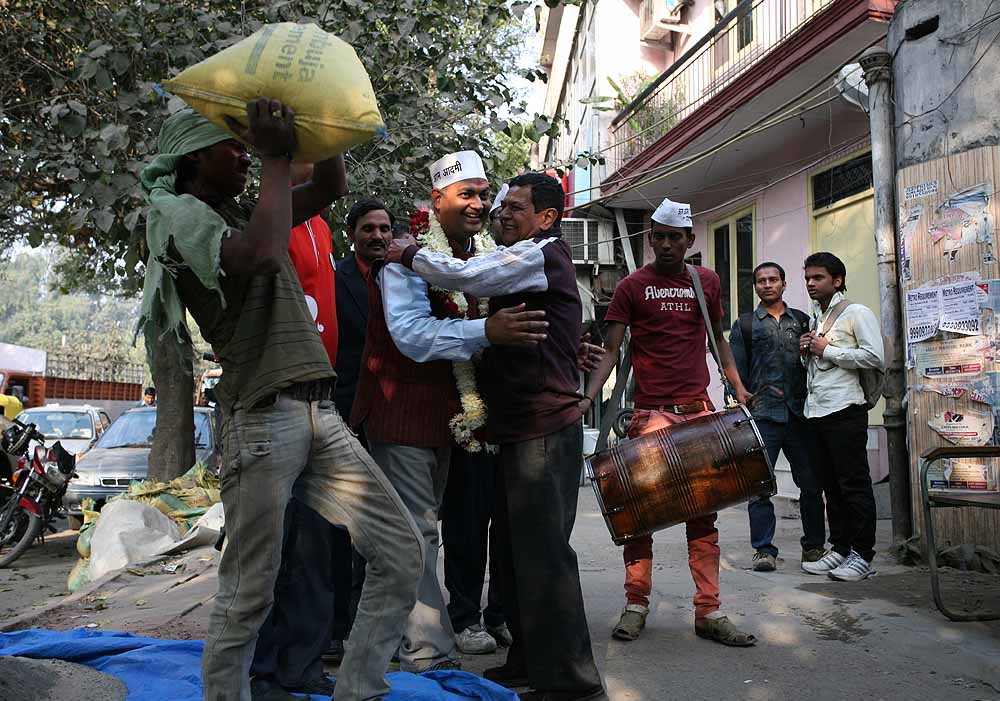 But how long can they remain untainted now that they are in this dirty business that we otherwise call politics? Ask that to the recently elected MLAs of AAP and you will quickly learn how they are steering clear of that word. It is not politics that they are in for, we are told, but to change politics itself. “What we are doing has been labelled as politics but it is actually a political revolution to change the system, the country,” says Bidlan. “It’s not power we are after. We will give power to the people in true swaraj style.” Some even choose different words—‘revolution’ and ‘service’ are the ersatz they offer.

As Surender Singh sat outside his office in Delhi Cantonment, where he garnered a lot of support for his role in fighting terrorists in the 26/11 Mumbai attacks, a pavement retailer came up to him and demanded her pound of flesh—“We voted for you. Now help me put up my shop again,” she said, complaining about police action to evict retailers. Can he deliver? “If you have the will, then it’s not a problem. We haven’t come with the will power to sit on a gaddi,” says Singh, who first came into spotlight after Kejriwal took up his complaint in 2012 of not getting his pension. “We want to work the way Anil Kapoor did in the film Nayak where he becomes the CM.” A scene from the film shows an empty complaint box—a testimony of his good work. Transforming reel into real maybe a tall order but with the emphatic people’s mandate now propping them up, there’s nothing that can hold these MLAs back. At least for now.