The discrepancies on record in the SIT reports of 2010 and 2012 will continue to cast shadows over Mr Modi’s political future and his prime ministerial ambitions. 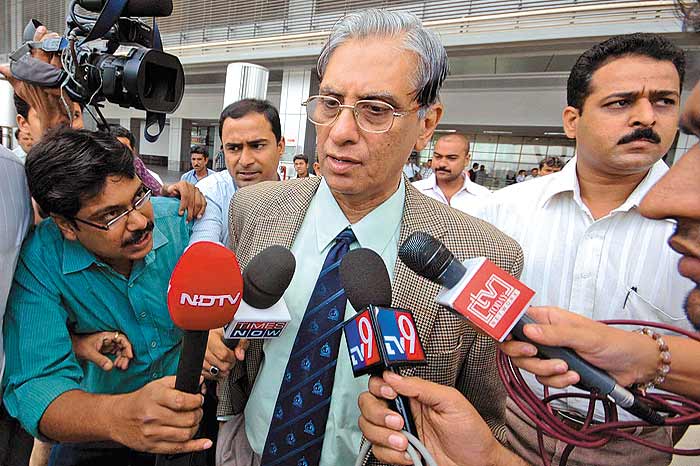 Did Narendra Modi instruct officers to allow Hindus to give vent to their anger and unleash communal violence? IPS officer Sanjiv Bhatt and assassinated BJP leader Haren Pandya alleged he did. Most of the officers who attended a meeting at the chief minister’s residence on February 27, 2002, say he did not. The closure report of the Special Investigation Team, released last week, appeared to give Modi ‘a clean chit’, holding that even if the CM made a statement ‘within four walls’, it would not amount to a cognisable offence. But the discrepancies and inconsistencies on record in the SIT reports of 2010 and 2012, some of which we list below, will continue to cast shadows over Mr Modi’s political future and his prime ministerial ambitions.

1. Who attended the controversial meeting?

Curiously, while in 2010, the SIT reported that seven officers, in addition to CM Modi, attended a meeting at the chief minister's residence on the night of Feb 27, 2002, but in 2012 the number has gone up to eight. Thus ironically, 10 years after the carnage, it is the SIT from whom we get to learn about a new name as being one of the participants of the crucial meeting.

2. Did Modi tell officers that Hindus be allowed “to give vent to their anger”?

No, said K. Chakravarthi, then DGP; P.C. Pande, the then C.P. Ahmedabad; K. Nityanandam, then Secretary (Home); and P.K. Mishra, the then Principal Secretary to CM, in both the reports submitted by the SIT. K. Chakravarthi also contradicted and denied that he had expressed any discomfort to his junior ADGP R.B. Sreekumar on Feb 28 about any instructions given by the CM in this meeting, as was documented by the latter in an affidavit (his fourth on the subject).

But some who were either not mentioned as having attended the meeting, or had denied attending the meeting or suffered from a lapse of memory earlier, sang a different tune this time. No reason was provided for this sudden shift:

3. Did Sanjiv Bhatt attend the meeting?:

The Amicus Curiae also pointedly referred to the observations in the SIT's preliminary report in this regard:

The chairman Mr Raghavan had noted in his comments of May 2010: “The three officers (P.C. Pande, P.K. Mishra and Ashok Narayan) had been accommodated in post-retirement jobs, and are therefore not obliged to speak against the chief minister or the state government.” Other officers remained a part of the same state administration. And yet no reasons are provided for these inconsistencies or whether any attempt was made to cross-question and verify.

4. Was there any dissenting note on plans to bring the dead bodies of Godhra carnage victims by road to Ahmedabad?

5. Why does the closure report gloss over Modi’s failure to visit riot affected areas in the capital city till a week after the riots began ?

6. Did the chief minister seek to justify post-Godhra rioting by citing Newton’s law ?

The SIT not only takes Mr Modi's assertions at face value but even offers explanations on his behalf. The charge of illegal instructions against Mr Modi was that he wanted his officers to allow the Hindus to vent their anger: “This time the situation warranted that the Muslims be taught a lesson to ensure that such incidents do not recur ever again.” And yet ironically in an attempt to counter it, the SIT does not document any instance where Mr Modi expressly asks that the post-Godhra perpetrators be brought to book, but instead goes on to bizarrely provide “at-least” five “fully documented” instances during Feb 27-28, 2002 to show Mr Modi’s commitment to uphold the law by punishing “the culprits responsible for the Godhra incident in an exemplary manner, so that such incidents did not recur ever again,” and then it goes on to conclude

In the light of aforesaid discussion, the interpretations made on alleged illegal instructions given by the Chief Minister by Shri R.B. Sreekumar and Shri Sanjiv Bhatt, appear to be without any basis. Further, even if such allegations are believed for the sake of argument, mere statement of alleged words in the four walls of a room does not constitute any offence.

An edited, shortened version of this on-going analysis appears in print.