The adoration-denigration cycle is the lot of those on pedestals 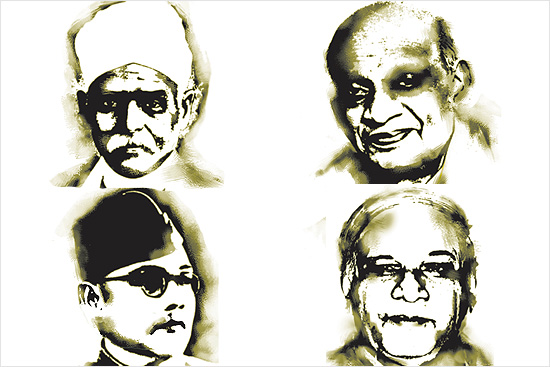 AN argument broke out between Nehru and Patel after Mahatma Gandhi’s assassination. It wasn’t about their ongoing differences over the violence accompanying Partition. It was about commemoration. Nehru wanted Birla House—at the very least the gardens of the house, where Gandhi was shot dead during his daily prayer meeting—converted into a memorial. Patel balked. He thought the tragedy too grave, too horrific to be contained and remembered at the scene of the crime. In this instance, Nehru prevailed over Patel.

Close to a million people were killed in Partition violence. Indeed, India and Pakistan are living memorials to those killed, although, uncontained within one site, their deaths remain unmarked by any conventional memorial. For the tragedy of the Partition carnage, too, has been far too grave and horrific for it to be fixed in any monument. In contrast, memorials to great men—well, mostly great—have proliferated. Of late, especially, there has been a resurgence of competitive commemoration of India’s “founding fathers”. From plans for the world’s tallest statue, of Patel, in Gujarat, to speculation on the possibles for the Bharat Ratna, the nation’s founding fathers are being summoned and are exacting their children’s attention.

It is in the nature of father figures to never quietly go away, never more so than after death, which guarantees their perpetual return. Jacques Lacan, an insightful and controversial psychoanalyst, taught us that, once dead, fathers become even more potent. The dead father, the theory goes, is perpetuated through his name, and it is this name that reproduces the order of things, whether familial or symbolic. The patriarchal weight of such an order is particularly reinforced in the case of a nation that is often, as with India, thought of in terms of the mother. You may want to dismiss this as pure psychobabble, but it is nevertheless instructive that precisely because these foundational figures are deemed to hold the symbolic order of the nation their name and its commemoration has become the stuff of the everyday yet visceral politics that signifies their power. The competition over commemoration today is a contest over the symbolic stakes of the nation. Undoubtedly, one particular family has sought to monopolise the family history of the nation, its name indelibly attached to and recounted through memorials, schemes, stadiums, airports and so on.

But since the early 1990s, with the pluralisation of party politics or what social scientists like to call the democratisation of democracy, the official script of the nation has reflected political changes. It was only in 1990 that Dalit leader and constitution writer B.R. Ambedkar was posthumously given the Bharat Ratna, and two years later, Maulana Azad followed him to this hallowed list. While critics and commentators dismiss these posthumous grants as cynical ploys, the battle of awards, just like acts of remembrance through the naming of schemes and initiatives, are a crucial indicator of the political temperature of the day. After all, it was only the era of Mandal politics that created the space for the memory of Ambedkar to become part of the official narrative of the nation.

With no deep antecedents, the BJP is anxious to occupy history. To go by current rumour, honouring Madan Mohan Malaviya would be, among other things, a bid to acknowledge the extent of their own past. An early proponent of Hindu nationalism, Malaviya was also a Congress stalwart. If the Congress of the nationalist era was a big tent, then the idea of awarding the Bharat Ratna to the Dalit leader Kanshi Ram by the current government can only be seen as a strategy of aggressive incorporation. It would seem that while the BJP is keen to represent the short history of Hindutva, it is equally zealous to rewrite the script of the nation. Subhas Bose, though ubiquitously considered brave, is also remembered for his alliance with fascist forces during World War II. No incitement to memory is purely celebratory. Criticism, policing and claims to exclusive ownership mediate all national memory. As figures of identification, any act commemorating these fathers is followed up with criticism, if not ridicule. Once fit only to be venerated, Gandhi today also invites denigration for his views on caste or women. Once the nation’s only father, he is now being replaced with and compensated by other figures. But whether it is Malaviya, Patel or Bose, these alternative fathers of the nation can only be pushed into the position vacated by Gandhi—and so to suffer the same fate as him.

(The writer teaches modern Indian history and political ideas at the University of Cambridge.)