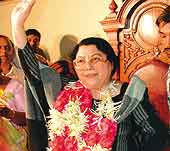 A mayoral election is usually just symbolic. But the anointment of Aneesa Mirza (Congress) as the first woman Muslim mayor of Ahmedabad on April 16 is special. Many see in it a spark of hope for a community battered and demonised by the establishment. "It’s poetic justice. It’s not just a victory, but a reinstatement of true secularism in a hopelessly divided society," Aneesa, an MA in History and English, told Outlook. Aneesa joined the Congress in 1969, became a municipal corporator in 1987. "My priority is to get justice for those who’ve suffered and have been deprived, not just among Muslims but also among Hindus. A secular person is one who puts humanity over community. I’ll visit all wards, try to make Ahmedabad a symbol of love, peace and brotherhood." Easier said, perhaps, but there are many who would wish her mission well.