It’s a dress rehearsal for the big contest in 2019. Bypolls to two Lok Sabha seats in UP offer a chance to test the feasibility of a Bihar-style ‘grand alliance’ against the BJP. But can it work? 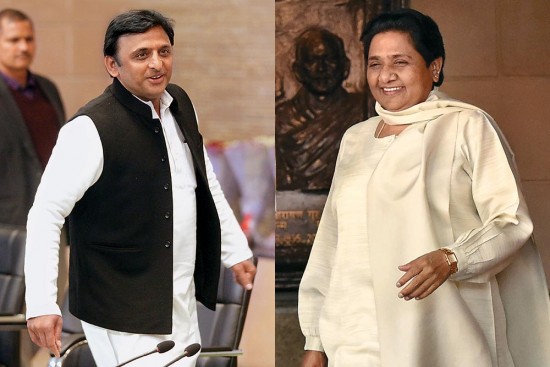 So Mayawati and Akhilesh Yadav have finally opted for pragmatism over pride and prejudice. The logic had been staring at everyone’s face from even before 2014,  when the electoral phenomenon called Narendra Modi hit Uttar Pradesh for the first time. It was like a giant snowball, devouring the whole landscape before it, almost programmed to superabundant success. But even in the face of that self-propelling elemental force, an aggregation of the three main non-BJP parties—Samajwadi Party, Bahujan Samaj Party and Congress—added up to just a wee short of 50 per cent of all votes cast. And seats gained? Just 7/80. Everyone saw the logic, but no one could surmount the entrenched political antagonisms to make it happen.

It did happen, over a year later, in Bihar. A ‘mahagathbandhan’ or grand alliance of two forces that had lived in mutual antipathy since the mid-1990s. The Nitish-Laloo entente didn’t endure, but it demonstrated the viability of the formula. That is, when faced with an otherwise unstoppable force, enemies can join hands to become one immoveable object—for sheer survival. The thought has been intermittently floated as a trial balloon ever since, especially after the assembly polls in early 2017 once again reiterated the BJP’s utter domination of the field in UP. What if Mayawati, still an icon for Dalits in her reduced state, and still the proud owner of a near-captive vote, comes together with the newly maturing talents of the second-generation Samajwadi, Akhilesh, with his party’s solid earth connection back in Yadav country?