Sow The Sun, Reap The Wind

High up on the mountains, survival depends on how you tame the sun, wind and water to serve you 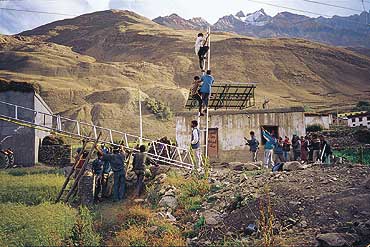 outlookindia.com
-0001-11-30T00:00:00+0553
At an altitude of 12,000 feet and above, you may not see activists sweating it out. For one, you need lung power. And you need to think different. That’s what Sunil Pillai and Gargi Banerjee did and the net result was an organisation—Pragya—that has made its mark in the higher reaches in areas like eco-conversation and snow harvesting.

Sunil and Gargi were your ordinary townsmen looking for some adventure. It was in the course of one such adventure to Leh that the duo stepped back and wondered whether they could give back something to a region they had only taken away from. Pragya began more as a journey and ended as a full-fledged high-altitude NGO. "With most of the attention focused on the Bimaru states, there is very little focus on the Himalayas. With sparse population, most places are simply clubbed as retreats," says Gargi.

It was 11 years ago that Pragya began its work of classifying medicinal and aromatic plants in right earnest. The traditional healers were taken into confidence and trained in the art of hardsell. Close to 59 species were identified and a threat assessment study done. Community plantations, kitchen gardens, nurseries followed in keeping with the NGO’s objective of an all-round development of the region. The efforts paid off, and also fetched the Whitley Award for International Nature Conservation in the year 2000—the Oscar equivalent in conservation.

Pragya’s project areas are above 8,000 feet that remain under snow for more than six months in a year. It works in five Himalayan states—including Ladakh, J&K, Himachal Pradesh, Uttaranchal, Sikkim and Arunachal Pradesh.

The organisation today has set up three ethnobotanic centres and five rural museums for the preservation of the local culture in the western and central Himalayas. The first-ever solar wind hybrid system was installed at an altitude of 14,000 feet in Lossar village of Lahaul and Spiti, which fetched another award—the International Energy Globe Award, 2005. The solar energy system today lights a rural library, serves 60 households and a weaving centre used by the women to weave carpets. As Gargi says, "At an altitude of 15,000 feet, you discover that the main sources of energy are wind, sun and water and you try to work them out to their optimum. We realised they had to be tapped."

The future? Snow harvesting where trials are on to store snow to create snow reservoirs. Pragya will move on to climate change impact assessment, drought and disaster mitigation. Where else? At high altitudes.

U-Turn On A Train