The South, with a longer history of social justice, has been quiet on quotas 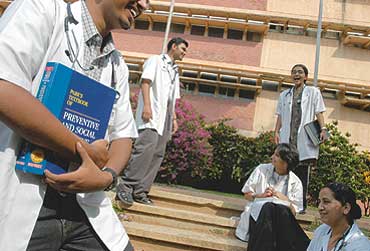 Today, Tamil Nadu has 69 per cent reservation and Karnataka 50 per cent in all institutes of higher learning. Kerala has about 50 per cent and Andhra Pradesh 49.5. Ironically enough, some of the first beneficiaries of reservation in education were the Brahmins. In Madras Presidency College, the British administration noted that most 'natives' (at that time largely upper castes) failed to clear the final examination in the first and second divisions with 40 per cent marks. To ensure that more candidates passed, a third division (at 33 per cent) was introduced in the mid-nineteenth century. Subsequently, the Madras Presidency area (which included large parts of Andhra, Karnataka and Kerala) saw Dalits and non-Brahmins demanding an equal share in employment and education. When the Justice Party came to power in the Madras Presidency, it issued the first Communal GO in 1921 reserving jobs for various non-Brahmin communities. This was stuck down in 1950 by the Supreme Court. But the concept of quota was introduced much before Independence in the four southern states.

In Tamil Nadu, the 69 per cent (30% BCs, 20% MBCs, 18% SCs, 1% STs) quota was arrived at without any proper study of caste figures. This distribution may bear little resemblance to ground realities. Says P. Radhakrishnan, professor at the Madras Institute of Development Studies: "It was an arbitrary political decision with no sociological basis." As a result, SCs, BCs and MBCs have begun to outperform the so-called forward communities, cornering a majority of the open competition (OC) seats. In the 2005 medical entrance, out of a total of 1,445 seats in 12 medical colleges, 430 seats were available in open competition. As many as 321 BC, 57 MBC and 14 SC students made it in the OC list. Only 38 from 'forward' communities qualified. "This shows the upholders of merit are talking rubbish," says G.R. Ravindranath of Doctors Association for Social Equality.