Neem skirts and suicides, the Dravidian cadre do it best 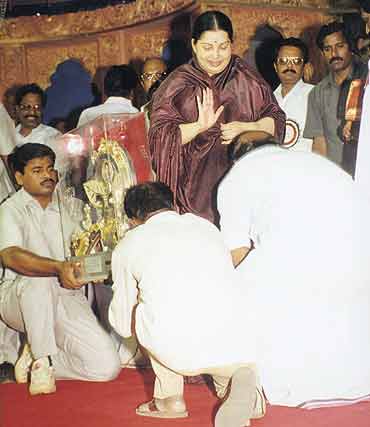 outlookindia.com
-0001-11-30T00:00:00+0553
Among Dravidian parties, loyalty alone will not do. They demand inhuman and unreasonable dedication. They may pride themselves on self-respect and rationalism, but it's sycophancy that's on the pedestal. Starting with the 'political suicides' of Dravida Munnetra Kazhagam cadre during the 1965 anti-Hindi agitation, Dravidian leaders have inspired, willed and encouraged the cadre into extreme acts of loyalty. After the DMK rode to power in 1967 under C.N. Annadurai's leadership, the 'martyrs of the language riots' of 1965 were immortalised. Plays were staged on their lives, a subway was named after one of them. Another, who had 'sacrificed' himself, got a park rechristened in his name.

Though Anna was CM only briefly, during his illness several DMK workers attempted suicide. M.G. Ramachandran, screen idol and ex-DMK leader who broke away and floated the AIADMK, also had hyper-dedicated supporters. When he was declared critically ill in 1987, 22 people committed suicide, hoping their deaths would breathe life into the leader. After his death, more people gave up on life. More recently, to bring J. Jayalalitha luck on her birthday, cabinet minister Indira Kumari, along with other women workers, danced in a temple clad in neem leaves. In February '03, 40-year-old Gunasekaran did an Ekalavyan for Amma on her 55th birthday—he severed the little finger of his right hand with a sickle and dropped it in the temple offerings box. This, to give Jayalalitha a long life. The CM wisely ordered plastic surgeons at Apollo Hospital, Chennai, to reattach the finger. The AIADMK bore the costs.

Any meet of the two main Dravidian parties is replete with such scenes, senior party functionaries bending over backwards to please the leader. Ministers prostrating themselves before Jayalalitha seeking her blessings is a common sight. Birthdays inevitably get the most high-voltage melodrama, as is witnessed by the ads put out on Jayalalitha or Karunanidhi's birthday. The leader is the only ray of hope for Tamils, the person who will restore Tamil pride. The god/ goddess myth-making has reached its zenith.

So, is such sycophancy a specific Tamil aberration? Ravikumar, writer and rights activist, says we need to understand the phenomenon historically. "In the past, expression of loyalty to the king took crude forms. People would pull out their tongues and die, behead themselves, bang their head, court death." These were revived by a Dravidian movement which portrayed M. Karunanidhi as 'Thiruvarur Cholan'—a Chola king. Today, he is called 'Semmozhikondan', an appellation which means 'the man who got recognition for Tamil as a classical language'.

Notes C. Lakshmanan, fellow at Madras Institute of Development Studies: "Even Periyar the rationalist encouraged successor Annadurai to mount a royal chariot during a Dravidar Kazhagam rally." Rarely are Dravidian leaders seen as ordinary humans. A public image is created and an aura of divinity woven around it. "You would never see mgr without his cap, dark glasses and white dhoti. Nor will you spot Karunanidhi without his goggles and yellow shawl. The image of Karunanidhi in a lungi (during his arrest) was an unintended public image," he adds.

Self-immolation too seems a peculiar Dravidian party trait. "When Congress leader Kamaraj died, we didn't see so many suicides," says Lakshmanan, who links the phenomenon to the absence of a questioning culture among Dravidian parties. "In the DMK or AIADMK, there's no intellectual culture. To ask questions is wrong. You surrender totally to party ideology. It's this anti-intellectualism which leads to mindless suicides."

Lick It Or You're Booted