It’s a fraught genesis. Every step here reminds us of our collective sins. 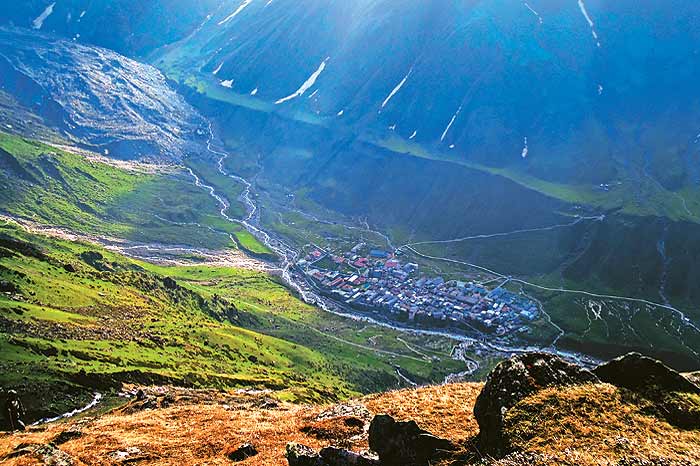 Looking down from our eagle’s perch, a small grassy knob in the hill where the shepherds bivouac during season en route to Vasuki Tal, we can see the head of the Mandakini valley laid out below us like a cartographic model, the inside of a giant, hollowed-out ship. On the far left loom the icy mastiffs—Mt Meru and its neighbours. At their feet, somewhere amid the moraine, there’s Chorabari Tal, the blue lake that received some of Mahatma Gandhi’s ashes. The glacier that feeds it (and lends it its name) is reputedly one of the fastest depleting in the world. It’s also the source of the Mandakini, one of the Ganga’s chief tributaries. Sundry other streams join it on its 75-km sweep downhill, the Doodhganga hurtling down on our immediate left, Mahabhaga, Khirganga, Vasukiganga, and many other resonant names that carry either a Pahadi or a Puranic flavour. (The cumulative waters of the Mandakini flow and join the Alaknanda at Rudraprayag.) The valley is a snapshot of a whole hydrological system in the natal ward.

In the middle of all this, bottom centre of the valley, stands the ancient stone shrine of Kedarnath and the bustling habitation around it—pilgrims and locals put together, say 20,000 hyper-energetic humans. Far across on the opposite hill, 5 km as the crow flies, our guide points to little dots: horses grazing in the snow-flecked meadows above the shrine to Bhairon, the forest deity. We have a hard time getting our guide not to litter the place with empty Maggi packets. “Shall we hide it under the rocks?” he asks, cockily. The preferred method for trekkers is to burn the plastic waste, apparently. Near us, an alpine rodent, rabbit-sized and tailless, chews at the mud before scampering into the rocks. It’s well above the treeline, bracing cold, and the creature has four months to go before hibernation season. And on the far right, down below, little white-and-blue things fly in and out. You could mistake it for some exotic Himalayan dragonfly. Except for that clatter. It’s the helicopter shuttle service from Phata, 25 km downhill. There’s one every half-hour, weather permitting, landing and taking off from three helipads. Well-heeled pilgrims fly in at Rs 7,000 a pop, VIP darshan included. 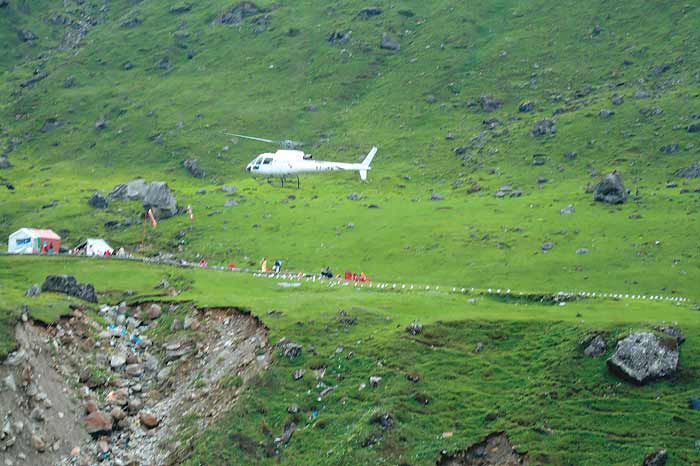 Choppers set up a racket within the earshot of glaciers. (Photograph by Viju Thomas)