Tharoor went out with a show of petulance 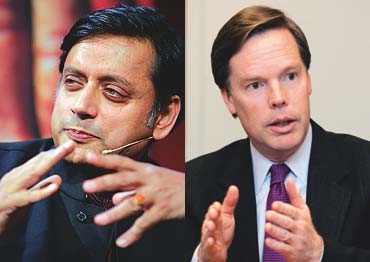 A week before Shashi Tharoor withdrew from the race for the post of United Nations Secretary General (UNSG), he had been clearly told the US won't support his candidature. The person who conveyed this news to Tharoor was none other than the US Under Secretary of State for Political Affairs, Nick Burns.

Senior government sources in New Delhi say Tharoor found Burns' candour heartbreaking, quite understandable considering he had assiduously worked on his election from the time he met and sounded Manmohan Singh about it in NY last year. Such was Tharoor's disappointment that he reacted petulantly, even telling Burns that Washington's decision was bound to have repercussions on Indo-US relations.

Tharoor's immature reaction, sources say, prompted Burns to meet foreign secretary Shyam Saran, already present in America to iron out problems in the Indo-US nuclear deal, and explain the rationale behind the US decision.

Burns told Saran the decision was not a vote against India. It was based on an assessment of leadership qualities required to head the UN, thereby implying Tharoor was a political lightweight. Second, Burns argued, the US favoured a candidate who did not belong to the UN system. This was necessary to bring about changes in the UN according to US plans. The subtext: Tharoor was too closely identified with the current UN system to radically revamp it.

As Saran came out of the meeting with Burns, it was apparent that the US had swung solidly behind the South Korean foreign minister, Ban Ki-moon. From Washington's perspective, Ban was a logical and inevitable choice. South Korea is a close ally of the US. The question is: why did Tharoor choose to remain in the fray till the last week, even though aware Washington was to veto his candidature? No one knows.

But then, Tharoor's candidature for...