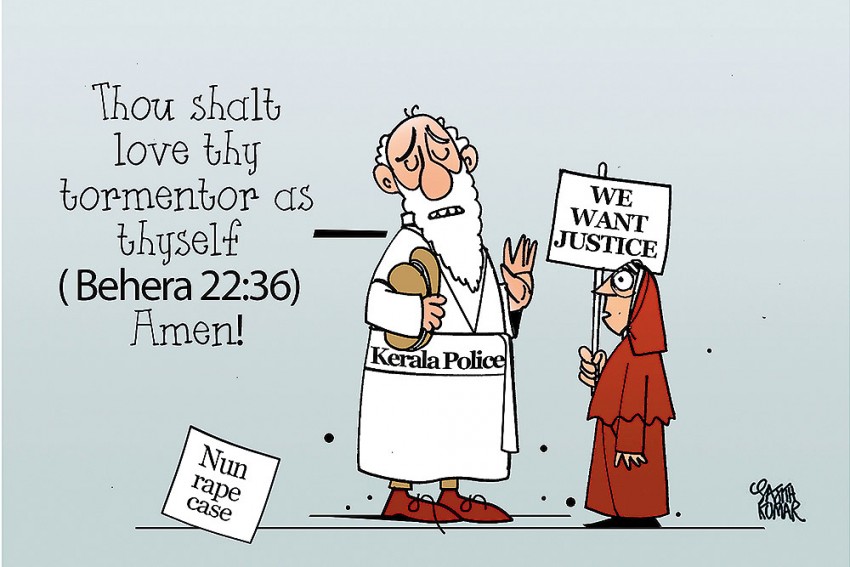 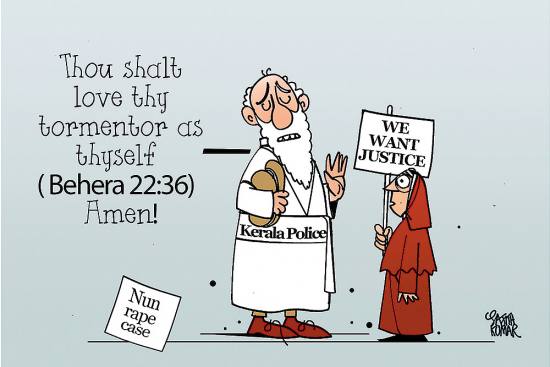 The episcopal throne is a sturdy thing; to topple it is no simple task. The ongoing ignominy surrounding a nun’s claim that she was raped by the Latin Catholic (Syro-Malabar Church) bishop of Jalandhar, Franco Mulakkal, 54, has seen little progress in the criminal investigation and no internal inquiry or disciplinary proceedings ­initiated by the Church—amid rum­ours and acc­usations of political and monetary muscle being flexed and ranks being closed—and denials and counter-accusations from the alleged perpetrator, while a group of fellow nuns protest bearing red-lettered placards.

The nun joined the Jalandhar-based Missionaries of Jesus in 1994—a year after the congregation’s founding—aged 18. A decade later, then bishop Symp­horian Keeprath appointed her the congregation’s first superior general, a post she held for nine years. The numbers of the fledgling congregation have rema­ined below 100, and this hindered it from becoming an institute of ponti­fical right (under the Pope) and led to it continuing to remain one of diocesan right; that is, under the control of the bishop. After a new superior general was elected, the nun was posted to a convent in Kura­vilangadu, Kerala, which came under Mulakkal’s jurisdiction when he took charge as bishop of Jalandhar in 2013. On June 27 this year, she filed a police complaint—reportedly after being ignored by Church authorities—alleging that Mula­kkal had raped her at the convent 13 times between 2014 and 2016.

The bishop has responded by denying the allegations and claiming that the nun was motivated by thoughts of revenge—he had supposedly ordered an investigation into a complaint that she was having an affair. There have been mixed res­ponses from others in the Church, with five members of the Missionaries of Jesus, later joined by people from other Christian organisations, protesting in support of the nun, while others have accused the nun of tempting the bishop. One protester says, “She [the nun] was under tremendous pressure to leave the congregation, and those of us supporting her also began to fear for our lives,” adding, “the bishop’s plan is to close down the congregation.”

The Kerala Latin Catholic Association, the Church’s official laity organisation, also wrote to the ­apo­stolic nuncio to India (the Pope’s representative), archbishop Giam­battista Diquattro—as did the nun herself— and the president of the Catholic Bishops’ Conference of India, cardinal Oswald Gracias, pressing them to act urgently. Now in Rome, the cardinal has reportedly said that he would raise the matter with the Pope.  The nuncio is yet to say anything.

The Missionaries of Jesus congregation itself has taken its stand alongside Mulakkal, saying, “We strongly condemn the protest in Kochi. We cannot crucify an innocent soul based on such allegations.” Their statement goes on to say, “The allegations of rape are totally baseless...She ­alleged that she was raped on May 5, 2014, but even after that, the bishop par­ticipated in functions at her house on her invitation.”

The police questioned Mulakkal for nine hours in August, recording his statement and seizing items, including his laptop and mobile phone—but did not arrest him, with an officer quoted in the press as saying, “The bishop cooperated with us. We had prepared a 55-point questionnaire to record his statement. The investigation is on, and we have not arrested him as yet.” Allegations of collusion between Mulakkal and the police have come from the nuns and from on  high—P. Kemal Pasha, a former justice of the Kerala High Court, was reported as saying, “We can see a nexus between pol­ice and accused here.” Protests dem­anding Mulakkal’s arrest continue, but there is no sign of any move so far.