Sound Of Boots On A Starry Sky 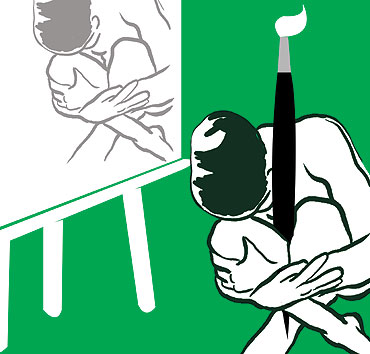 outlookindia.com
-0001-11-30T00:00:00+0553
Having failed to get a visa for Pakistan over all of the last thirty years, I was delighted when I was granted one to accompany my husband Raja Menon who was going to a conference in Islamabad. Set to leave on March 4, everyone warned us not to go to 'the most dangerous country in the world', where the Sri Lankan cricketers had been attacked the previous day.

Of course, we went! Lahore airport was virtually deserted. Our connecting flight to Islamabad (there's no direct Delhi-Islamabad flight) was by PIA's tiny 'pankhawala' plane.

Islamabad is still a city in progress, with many imposing new structures unconnected with each other either physically or historically. The sparse population, well laid-out highways and leafy avenues exude a sense of calm that belies the turmoil under the surface. Most foreign envoys had sent their families home and the American School was empty of Americans. These are momentous times for Pakistan, and the people we met seemed to be in a state of suspense in a rapidly changing scenario. A retired general whom we know admitted what we have suspected all along, that the 'deal' with the Taliban in Swat was virtually forced on them by the retreat of their defeated army in the Federally Administered Tribal Areas (FATA).

The Marriott Hotel where we stayed was sandbagged all around—a virtual fortress. The next morning, I took a ten-minute stroll (much to the dismay of the security) to the National Gallery of Art—an imposing, inward-looking building with vast, well-lit galleries. I was virtually the only visitor. Two rooms showing the apocalyptic and often allegorical paintings of the late Sadequain clearly form the core of the museum's collection. What was really impressive, however, was an exhibition of Afghan, Iranian and Pakistani contemporary art. Much of it was in the now-ubiquitous genre inspired by miniatures and calligraphy, which artists from the Islamic world are particularly good at. However, it was the brilliant multimedia canvases of Iranian artist Khusro Hassanzadeh, which were of star quality, that made the visit memorable. I wish we could show his work in India. It is ironical that more inspiring than any art in the museums were the incredibly painted buses and trucks. The outpourings of popular iconography on these intricately painted moving installations are truly amazing.

An evening with the Indian naval attache and his wife was amusing, as their ISI minders sat outside patiently while we dined, and then followed us to a shoe shop which obligingly opened at 10.30 at night to sell us the much-coveted Peshawari sandals.

I spent the next two days in Lahore, hosted by a delightful family of academics and artists, and was treated to the lavish hospitality and warmth that one had heard so much about. We did a tour of the galleries, many of which showed cutting-edge stuff, particularly one run in the charming house of Salima Hashmi. On our first day, there was the huge rally led by Nawaz Sharif and his brother Shahbaz. (At the end of the rally, hoarse with declaiming all day long, Shahbaz burst into unmelodious song to rapturous applause from the crowds). Clearly, Punjab belongs to the defiant brothers whose planned Long March has overnight changed the already uncertain equations of Pakistan politics. No news that day of any breakthrough on the Lankan cricketers' attack, so of course RAW was being blamed. Happily our Pakistani friends took this with a pinch of salt.

Lahore is a real city, a city with a past. And, like Delhi, it has a mix of important Islamic and colonial buildings. A visit to the famous three-domed Faizal Masjid built by Aurangzeb, and the fort, reinforced the similarities of our shared past.

In a brief visit to the Lahore Museum, we rushed to the incredible collection of Gandhara sculptures. I prayed silently that the Taliban would never be able to lay their hands on these exquisite examples of the world's common heritage.

The Aitchison College, which has magnificent Indo-Saracenic buildings on a hundred-acre estate in the heart of Lahore, is Pakistan's answer to the Doon School, where the sons of the elite study for their Cambridge A levels as they don't have their own school-leaving certificate yet! We sat under a huge banyan tree watching fresh-faced boys play cricket, seemingly unmindful that their country was in crisis.

Back at the airport lounge, the newspapers of the day were full of dire predictions. Ayesha Siddiqua's lead article in the Dawn predicted that 'the boots will eventually march back from the barracks into the corridors of power'. And Martaza Razvi's piece about Nawaz Sharif ended with a single ominous sentence: 'God help Pakistan'.