They are friends indeed, of women scorned—helping to empower and rehabilitate them 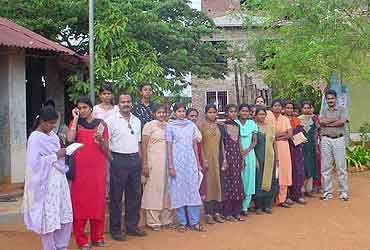 outlookindia.com
-0001-11-30T00:00:00+0553
In the late ’80s, two government officials, then district coordinators of the Total Literacy Project, were interacting with villagers in Mysore district when a woman snubbed them as fly-by-night operators who didn’t really care for people like her. The rest of the crowd told them to ignore her since she was a social outcast...a sex worker! But the truth in the woman’s remark rang true to their ears. It led K.V. Stanly and M.L. Parashuram to give up their jobs to establish the Odanadi Seva Samsthe (OSS).

Before founding Odanadi, they surveyed the socio-economic conditions of sex workers in Mysore district. Odanadi, meaning ‘soulmate’ in Kannada, was registered as a trust in 1992 and since then has been engaged in the rehabilitation and empowerment of the victims of commercial sex.

To start with, Odanadi decided to establish wide-ranging, direct contact with the women—no easy task, as it turned out. With no financial support, they had to surmount public scepticism, derision and active hostility. People whose interests were jeopardised, like moneylenders, pimps, gangsters, traffickers, brothel-owners, in some cases even cops, tried vehemently to suppress the campaign. Two Odanadi activists even paid with their lives.

All that has now fructified. In all, 400 women have been rehabilitated with alternative means of livelihood. Manjula, now a trained beautician, is making a decent living. Odanadi has also expended a lot of energy to try and eradicate the stigma attached to sex workers through awareness campaigns. Some 22 women once stuck in the flesh trade are now married.

In the course of their work, Odanadi activists uncovered outrageous situations: a head constable running a brothel, a lady teacher of a reputed institution selling girls to an estate owner in Coorg, a physical instructor of a convent school shooting blue films, a minor being molested by a doctor.

Many rescue operations have been possible only because of the active involvement of sex workers. So far, Odanadi has helped in unearthing as many as 13 trafficking networks of which one was international, five interstate and the rest based locally.

For the last five years, Odanadi has been running a home for children rescued from the trade. There are continuous health check-ups and counselling programmes in addition to activities oriented towards shoring up their ‘moral’ infrastructure: cultural capsules, meditation, recreation, group activities and training. A permanent residential school and rehabilitation centre, Prayoga Patha, has been set to provide education and vocational training to over 75 children.

Stanly and Parashuram feel opinions on the flesh trade have such striking variance that it is difficult to formulate a single campaign. Says Stanly: "The views of even the educated vary from being resigned ("it’s the world’s oldest profession") to thinking sex workers are a necessary evil ("better than having sex crimes"). We’re used to viewing a girl child as a burden. Trafficking can be largely controlled only if we become more sympathetic to our girls."

For the last few years, as the serious nature of its work was recognised, Odanadi has been receiving state government grants under its Swadhar scheme. If you want to help in any way, contact: 15/2, Gowtama Nagar, S.R.S. Colony, Hootagally Village, Belawadi Post, Mysore, Karnataka, India - 571 186. Phone: (0821) 402155