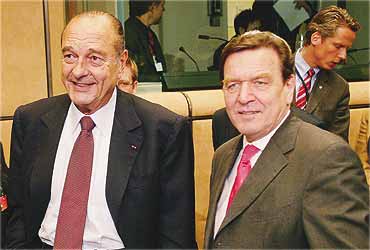 outlookindia.com
-0001-11-30T00:00:00+0553
Anti-Americanism is sweeping through Germany. And this isn't just a fashion statement. On February 15, more than half a million Berliners (that would be every seventh person in the city) took to the streets, enduring the biting winter cold to demonstrate against Uncle Sam. Asked to name the biggest threat to world peace, newsweekly Der Speigel found 53 per cent of Germans saying it was the us; only 27 per cent named Saddam's Iraq.

Standing between impassioned anti-war sentiments at home and the implacable US is German Chancellor Gerhard Schroeder. From explicitly ruling out Germany's participation in a war against Iraq—with or without a United Nations Security Council resolution—Schroeder is now seemingly willing, as the week petered out, to do a tightrope walk.

Schroeder's unequivocal stance against war was more strident than even the French, who only seek to postpone it till it becomes inevitable. Both, with their respective intransigence and insolence, had attempted to put the skids under the American war juggernaut. For one whole month, Germany prevented a nato decision to arm Turkey, arguing that such a step would make a war against Iraq appear all the more inevitable.

The stand had at one point threatened to drive a stake into the heart of the European Union. Germany, France and Belgium seemed to oppose Washington's war intent; England, Spain, Italy and a clutch of former Eastern Bloc countries favoured the US, some even dashing off letters of support to George Bush, much to the consternation of Schroeder and French President Jacques Chirac.

Most Germans remain sceptical about America's case against Iraq. As Steffen Angenendt, of the German Council on Foreign Relations, told Outlook, "This war, simply put, is seen here as wrong. Saddam is decidedly a smaller threat than, say, North Korea." Incidentally, Angenendt hopes the impending war will at least "blow nato to pieces". Joseph Wrinkler, a Green Party member in the Bundestag (Federal Parliament), concluded that there wasn't "enough material" in America's case "to start a war—not even for the Social Democrats." (The Social Democratic Party, or sdp, heads the coalition government in Germany.)

In fashioning a common approach lies Europe's strength, Sebastian Edathy, of the sdp-led coalition, is convinced: "If Europe has to be heard, it has to stop speaking in 16 different voices; they should agree before they speak." Such an agreement, most Germans fear, is proving increasingly elusive. Points out Angenendt, "We have to factor in this new phenomenon where democratically elected governments flagrantly disregard the wishes of their electorate, as is clearly happening in Blair's Britain, Berlusconi's Italy and Azanar's Spain."

It sounds true except that those countries aspiring to join the European Union are seen here as bending over backwards to help Americans topple Saddam. Hungary, for instance, has opened a military base in Taszar to help train some 3,000 Iraqi opposition volunteers. The Czech Republic has rushed a small biological and chemical warfare unit to Kuwait; the Poles are willing to support US action on Iraq—even without the UN agreeing to it.

As country after country in Central and East Europe lined up with the US, Chirac admonished them in Brussels, "These countries haven't been very well behaved and rather reckless of the danger of aligning themselves too rapidly with the American position. They missed a great opportunity to shut up."

But by February 17, the Germans too appeared to have fallen in line. Berlin agreed that nato should defend Turkey in case it was attacked. It even extended overflight rights to American warplanes headed to Iraq. Schroeder's spokesman Bela Anda told Outlook, "Germany has decided to send AWACS (Airborne Warning and Control System) to Turkey because a third of the nato's AWACS force is German."

Says Matihs Feldhoff, a foreign policy expert at C2DF, Germany's second largest company, "I find this completely crazy. Schroeder has now signalled a position that force is possible. In addition, he seems to have endorsed the American view that the inspections cannot go on indefinitely. Germans are now giving Patriot rockets to the Netherlands who will take their Patriot systems, our rockets and their soldiers to Turkey. It's absolutely crazy. We say that we will not send our soldiers there but what about those who man the AWACS. Are they not soldiers?"

At the end of the week, privately the German government seemed to have given up the ghost of its battle against the Americans. Klaus-Jurgen Hedrich, a life-long political opponent of Schroeder, in a wry manner told Outlook, "The so-called German way that Schroeder was alluding to is misleading. Germany will never do it alone, again."