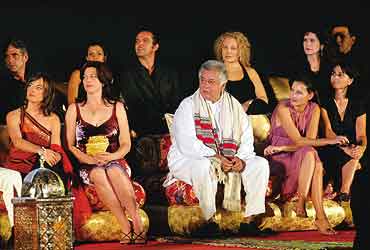 Both men are en route to the Third International Film Festival of Marrakesh. Scott's fleeting thought resurfaces. Bachchan is welcomed like, well, a prince. The next evening at the festival's opening in the magnificent Baddi Palace, he's bestowed the Star of Gold. The buzz about the star, in fact of Indian actors here, reaches the rooms of the famed La Mamounia Hotel: watering hole of the rich and famous, be it the Beatles, the Rolling Stones or today's celebs. The next afternoon they meet. The two central characters of Scott's film are Saladin, the Kurdish warrior and champion of Islam, and Baldwin IV, the Leper King of Jerusalem. Scott's main worry: should a Muslim actor play Saladin? The two men exchange numbers. The dialogue on The Kingdom of Heaven will continue, elsewhere.

Something strange is happening in Marrakesh. Somewhere along the way, the six-day film fest has been hijacked by the Indians. Down in the labyrinthian souks and the walled-in part of this ancient pink-red city, young men chant the names of Indian stars, often breaking into bits of song or dialogue from Hindi films. They're screened in over 80 cinema halls here. Apparently, the festival authorities included an Indian section after the last event when Moroccan scribes asked why their heroes (Indian stars) were missing. Lagaan was shown here last year, and Aamir's popularity was not lost on the organisers.