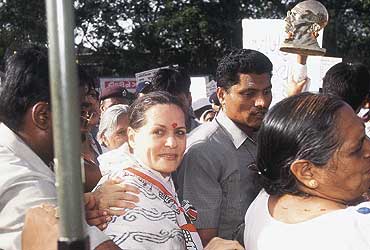 outlookindia.com
-0001-11-30T00:00:00+0553
The slanging match between Prime Minister Atal Behari Vajpayee and the leader of the Opposition (LoP), Sonia Gandhi, has turned personal and bitter. Arguably, the budget session of Parliament has been more about Vajpayee versus Sonia than the government versus the Opposition.

It was the debate on the Prevention of Terrorist Activities Act (POTA) that triggered the first sparks. Sonia accused the PM of being "meek and submissive". The PM retaliated not by attacking her stand on POTA but by commenting on her inexperience as the LoP. While Sonia told her partymen on how she had "provoked" the PM, she was genuinely puzzled by what brought on such personal attack. In fact, at an informal gathering she even asked a cabinet minister what part of her speech might have made Vajpayee lose his cool.

It's a question that's intriguing many. According to a cabinet minister, when Vajpayee heard Sonia accusing him of being meek and submissive he wanted to respond immediately. "If he did not react, the media would have played up Sonia's accusations. This way, at least the PM got his say as well."

This explanation is also being cited for the PM's speech during the CII meet. The media played up Sonia's comment at the opening session of the CII, where she remarked it was natural to speculate when leading industrialists invite the leader of Opposition to start off their annual get-together. Thus it was that the PM next day deviated from the subject at hand to first respond to Sonia's observations. He reminded her that it is the general public and not industrialists that elect governments and asked the Congress "not to count their chickens before they are hatched".

A gleeful Congress now claims that it is their leader and not the PM that is setting the agenda at every forum, be it Parliament or the CII meet. Explains a Congress MP: "The PM is only reacting to Sonia. By attacking her personally, Vajpayee is only adding to her stature as the LoP. He could have ignored her comments and treated her as a novice."

Informed of this, the PM laughed and remarked to a cabinet minister: "Who am I to give her stature as leader of the Opposition? It is the janata (public) that decides these things." Notes a PMO spokesperson: "She may be relatively new. But she is the LoP. Why shouldn't the PM take her seriously and respond to both her criticism and her suggestions?"

Again, it was Sonia who during the Gujarat debate suggested that the PM rise above party politics and take a more realistic look at Gujarat. Immediately, the PM reparteed that both the government and the Opposition should do away with the vote in the Lok Sabha and pass a unanimous resolution on the Gujarat issue. However, this was not to be as the TDP staged a walkout.

Not only that, Vajpayee spent the rest of his Gujarat debate not defending Narendra Modi but in clearing his own image. Referring to his Goa speech, he clarified that he had not just spoken of a jehadi Islam but had also talked of a softer, gentler Islam. Clearly, Sonia Gandhi's comments about the PM's "double-speak" had hurt.

Explaining the omission of a Goa-like defence of Narendra Modi from Vajpayee's speech, a cabinet source claimed, "It had been decided that while Advaniji would concentrate on Modi, the PM would announce the Gujarat relief package and clarify his Goa speech."

Sad indeed that when not responding to Sonia Gandhi, Vajpayee should react to his own outpourings. Issues such as POTA and Gujarat seem just incidental!