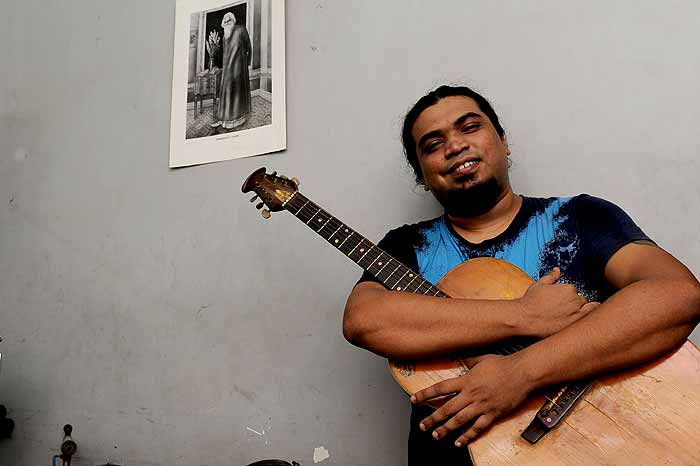 That’s a hit Rabindra Rap from the film Bong Connection. Now, Tagore’s songs are the in thing in Bengali fusion music: there are rock bands, indie rap groups, film songs. “The idea is to explore the greatness of Tagore using as many media and languages as are available to music,” says Gaurab Chatterjee, lead percussionist of the band Lakkhichhara (The Incorrigibles). He has joined composer Bickram Ghosh, whose Tagore Lounge, an album of Tagore songs, is out. Music director Debojyoti Mishra was one of the first to have introduced souped-up Rabindrasangeet in film, in Rituparno Ghosh’s Chokher Bali. His interpretation of Eki Labonno Purno Prano saw an orchestra of 50 vocal and instrumental sounds merge into a heightened crescendo—something never done before in Rabindrasangeet. “I had to evoke Binodini, the female lead’s spiritual awakening when she realises the futility of romantic love and embraces the eternal,” says Mishra. Tagore remixes have come under scathing attack from purists. “Tagore wouldn’t have allowed it,” says Eshna Sinha, who teaches Rabindrasangeet at Calcutta’s UTSA Academy of Art and Culture. “These are his creations and he meant them to be a certain way. It’s audacious, unacceptable. Sadly, it’s a trend and it’s impossible to stop it.”