Song On The Breeze

Trained in the devadasi's shringara bhava, MS became the epitome of the bhakti bhava 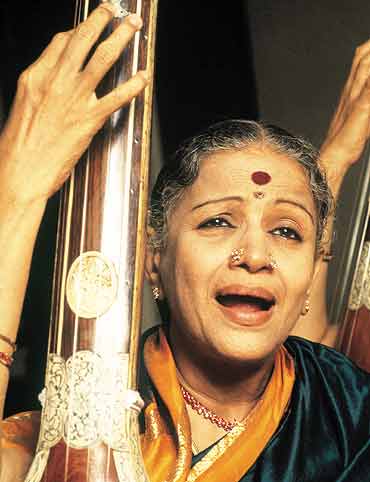 And as the dulcet voice of Madurai Shanmukhavadivu Subbulaksmi returned to 'samam', short of midnight on Saturday, December 11, rare would be those familiar with her oeuvre who did not feel a personal sense of loss. Rare would be those in hundreds of thousands of homes, across South India at least, who did not, on Sunday morning, get a lump in their throats playing her eponymous Venkateshwara Suprabhatam or the equally rich Meenakshi, Kamakshi and Vishwanatha suprabhatams. Or the Annamacharya kritis in Bhowli or Ragamalika. Or the deeply devotional Vishnu Sahasranamam.

Those familiar with the hedonistic chemistry of her throaty alaps, embellished by an easy abundance of bhrigas (range and resonance created in the voice box) and gamakas (oscillations, glides and other decorative embellishments) flanking the sonorousness of her nasal twang and the crystal clarity of her swara prastharas (permutation/combination of musical notes) would have reconciled themselves to the inevitability of a long winter for melody with the passing away of this most visible and accessible face of classical Carnatic music after having succumbed, the past few years, to the ravages of age.

MS, as she was fondly addressed, departed at 88 leaving behind a good seven decades of sustained service to the cause of Carnatic music in general and to devotional music in particular. And this, in itself, constitutes one of the abiding ironies of our times. Born in an indigent devadasi family with a marked musical lineage, MS belonged to that club of 'singing women' of the South whose parallel in the North are the 'bais'.

If, by the early decades of the 20th century, the musical platforms of North India were being invaded by the Kesarbais, Mogubais, Rasoolanbais, Hirabais and Askaribais, the South witnessed a parallel phenomenon in the rise of Mysore Nagaratnamma, Madras Lalithangi, Kanchi Jayammal, Coimbatore Tayi and Salem Godavari. This, in turn, spawned a second generation that witnessed the growth to fame of K.B. Sundarambal, S.D. Subbulakshmi, M.S. Subbulakshmi and M.L. Vasanthakumari. One could also safely include the Bharatanatyam diva T. Balasaraswati to this list, as she too happened to be a consummate singer.

Like the 'Bais of Benares', these astonishingly talented and supremely self-confident women stormed the public and platform spaces, which were largely a male preserve and virtually redefined the concert paradigm of free India. Interestingly, every one of them belonged to the traditionally disadvantaged community of devadasis for whom, as in classical anthropology, "motherhood is a fact but fatherhood mere speculation". In the Tamil provinces then, the only two female geniuses who bucked this and rose from the Brahmin community were the impossibly sweet N.C. Vasanthakokilam (who died, tragically premature, in her 20s) and the venerable D.K. Pattammal, who is a few years younger to MS.

Yet, coming from these ranks, the way MS ended up being the iconic metaphor of the nation's devotional voice and the untrammelled face of bhakti is, by itself, an extraordinary story of fairytale proportions. Her marriage in 1940 to freedom fighter and Congressman T. Sadasivam realigned the early coordinates of MS and set them on a new path of unrestrained 'Sanskritisation'.

Through a series of fund-raisers and charity concerts across North India for the Kasturba Memorial Trust—concerts patronised by Mahatma Gandhi, Jawaharlal Nehru, Sarojini Naidu, Rajendra Prasad, Sarvepalli Radhakrishnan, et al—MS became familiar to North Indian audiences as well as to the lobbies of power at the Centre. She also underwent special tutelage under Siddheswari Devi learning thumris and khayals, even as her guru Vidwan Semmangudi Srinivasa Iyer chipped and honed her talent. She learnt from other singer-teachers too like Papanasam Sivan, Musiri Subramania Iyer and G.N. Balasubramaniam. 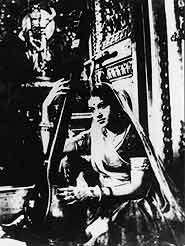 After a series of forays in Tamil films like Sevasadanam, Savitri and Shakuntalai, the troika of friends comprising C. Rajagopalachari, 'Kalki' Krishnamurthy and Sadasivam hit upon the brilliant idea of launching MS on a national scale. The launch vehicle was to be the film Meera, on the 16th-century bhakti poet of the same name, even as it facilitated their strategy of compacting music with devotion on to the persona of MS. This highly popular 1945 musical was remade in Hindi in 1947 and overnight converted MS into a household name across the country. In fact, the Meera bhajan Hari tum haro har ki peed, a favourite of Mahatma Gandhi's, was chosen for being broadcast by All India Radio on January 30, 1948, after Bapu was assassinated.

Sadasivam had achieved the impossible. He had systematically transformed a devadasi into a role-model 'Iyer' wife; a musician trained in shringara bhava into a musician who became the epitome of bhakti bhava; and a provincial Tamil-speaking girl into a national icon. There is some sublimating hypocrisy though, in the hype around her being the "twentieth century apostle of bhakti". Her rendition of bhajans and keertans flowed, no doubt, from the very core of her being. But she needs to be interpreted as an artist who epitomised the freedom and dignity of women.

While some of the best known names of Carnatic music like Mudicondan Venkatarama Iyer, Maharajapuram Vishwanatha Iyer, M.D. Ramanathan, Madurai Mani Iyer, Musiri and Semmangudi himself were destined to remain artistes with limited regional impact, MS went on to assume a towering presence on the national psyche.

A few select appearances, in the 1960s, at international venues like the Edinburgh Festival, the United Nations General Assembly and, later, in some of the Festivals of India and other events abroad, helped consolidate her image as the true ambassador of Carnatic music and its reigning queen. Without a doubt, other female vocalists like T. Brinda and T. Mukta, of the Veena Dhanam line, had conspicuously more musical depth and density. However, they had not been favoured with the 'Sanskritisation' route and remained largely invisible except to the cognoscenti.

The flood of 'letters-to-the-editor' in the Chennai dailies in the days following MS's demise are a window to the manner in which this god's own good woman was able to connect with king and commoner alike—both through her music as well as through her transparent personality. It is clear that MS will be remembered as much for the ringing quality of her Saroja-dala-netri in Raga Shankarabharanam or Srirangapura Vihara in Brindavana Saranga or Bhavayami Raghuramam in Ragamalika, as much for having lived the role of artiste-as-graciousness.

MS was the product of a heady expression of freedom for the female voice while remaining steeped in convention and orthodoxy.The quality of 'accessibility' in her voice is precisely reflective of this tension, so much a part of a new nation struggling to tide over its own growth pangs and adolescence. For centuries to come, people will wonder that such a voice with its amalgam of uninhibited sexuality, palpable innocence, abundant spirituality, distilled sweetness and unrestrained compassion blessed this land. For an answer as to how this phenomenon happened, one can only revert to the composition by 'Kalki' Krishnamurthy for the film Meera, sung so memorably by MS in a raga something akin to a Hindustani Jaunpuri: "Kaatriniley varum geetham..." The song just wafts in on the breeze.