Somewhere In The West...

The barbs are hitting home. As the Indian army immerses itself in the ambitious task of wiring up an inhospitable Line of Control, our correspondent Murali Krishnan follows their tracks in the Poonch and Rajouri sectors while T. Narayan photographs t 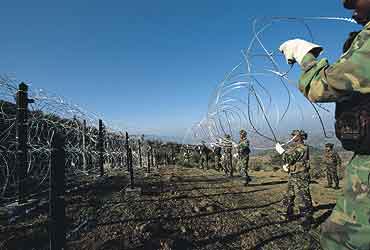 outlookindia.com
-0001-11-30T00:00:00+0553
India and Pakistan may be exchanging cryptic peace proposals, but down at the Line of Control (LoC), the army is taking no chances. In one of the most risk-fraught missions it has undertaken in recent times, it is fencing close to 490 km along the LoC, in the face of the combined hostilities of the terrain, the weather and the enemy.

"We hope when the fencing mission is complete, it will beef up our counter-insurgency operations and cut down infiltration," says Brig K.V.S. Lalotra of the 120 Infantry Brigade in Bimber Gali, Rajouri. Infiltrators favour the area under his command because of the passes here that are difficult to patrol. Through Bimber Gali and Mendhar—which have both seen fierce encounters between infiltrators and security forces this year—terrorists have managed to cross into the Kashmir Valley, and into Doda and Kishtwar. But, says Lalotra, "It will all be different when the fence comes up."

So, what exactly does it take to fence a kilometre?

Approximately 260 aggregate tonnage of cement, sand, iron pickets and steel wire in terms of essential hardware. The material is first carted to a roadhead and from there on transported in smaller vehicles. Then begins the real work, a time-consuming labour of digging and anchoring the pickets, then casting and curing the cement. "It took us two-and-a-half months to fence just 11 km and that too was done in two phases because of the hostile terrain," says Major Sunil Tiwari. Fencing a stretch of 1 km costs between Rs 25 and 30 lakh depending on the terrain. Army headquarters refuses to hazard a guess on the total costs involved but a ballpark figure of Rs 11,000 crore could well be realistic.

But it takes more than money and material to fence a kilometre. Even if hostilities are scaled down, the LoC remains very much 'live'. For instance, while erecting the fence along the 260-km Rajouri-Poonch stretch in the last four months, Lalotra's men had to counter heavy cross-border shelling, sometimes so severe that work had to be suspended for indefinite periods. In September, one soldier was killed and three others injured in mortar fire.

To evade this shelling, fencing is now carried out at night under the watchful eyes of patrols, deployed to protect soldiers of the Engineering Corps who do the actual work of laying the fence. "This sector witnesses daily shelling and even artillery fire. But it is a challenge for us and we will complete this fence early next year," says a determined Major Tiwari in Bimber Gali. Adds Colonel Sunil Limaye of the Sikh Regiment, "Our tactical requirements will have been fulfilled. Even if someone gets through the fence, detection is easier."

In many segments along the Rajouri-Poonch stretch, the fence, fortified with four layers of steel punch tape and concertina wires, has stuck to the alignment of the ridge lines. Snaking past high passes, hills and ravines, the fence, at certain points, is as close as 75 metres from the LoC, while in other areas is at a distance of 3 km. In some places in Poonch, the fence is almost at the LoC. "Once complete, the whole stretch will be electrified and that will be to our tactical advantage," says an army official. Work on the fence is also in full swing in Uri in the Valley. As in the Rajouri-Poonch sector, it is the infantry which has decided on where the fence should come up after assessing the ground realities.

Fencing these inhospitable stretches was a multiple logistical nightmare. It took two days of trekking to reach the front. At some stretches, the fence was put up at a height of 5,000 feet. "Sometimes there are no roads and we have to create tracks. Sometimes vehicular movement is impossible, so we employ mules," says an officer.

But even in its early stages, the fencing has begun to yield dividends. Last month, nine terrorists including an Afghan national who managed to cross over and cut through the fence at the Nikiyal post in Bimber Gali were killed. A few hours after the intrusion, the patrolling party found out where the fence was cut. "One group had traversed 500 metres into the hinterland from the fence. But during search operations we killed them after they were found hiding in the wild undergrowth," says a military intelligence officer. The army has also pressed into service trekker dogs to track intruders who have managed to get through the electrified fence.

Army officials cannot assure you if the mammoth exercise will be a foolproof method to stop infiltration. "It will, however, deter militants from entering," says Lalotra. "And even if he does cross over, we can detect and destroy him in quick time." Meanwhile, villagers in the vicinity are feeling more secure. Says Anayatullah Khan, sarpanch of Balakote in Rajouri, "In some ways, the place has been sanitised. We hope people can breathe easier now."

It won't be long before the multi-tier security comprising sensors, thermal imagers, night-vision devices and now electric fencing along the LoC will be in place. But will they be enough for intruders not to step out of line?