Something To Take Offence? 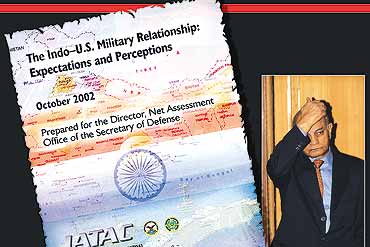 outlookindia.com
-0001-11-30T00:00:00+0553
The highly controversial Juli A. Macdonald report, 'Indo-US Military Relationship: Expectations and Perceptions', has a lot more pungent and slanted criticism of the functioning of the Indian defence establishment than was earlier reported in Outlook. What's more, Macdonald, director, Net Assessment Office of the US secretary of state for defence, Donald Rumsfeld, has also taken potshots at the country's policymakers. All in all, the report is a devastating indictment, not only of the Indian army, but of other crucial departments as well.

In a significant chapter titled 'Areas of Strategic Convergence and Divergence', the report takes a detour to touch upon the widely-held American perception that it is difficult to do business with India. According to the report, no American believed that military cooperation "would or could open the floodgates" to US foreign investment. The "disappointments and frustrations associated with doing business in India cuts across most sectors but are particularly strong in the energy sector". A high-ranking American policymaker argued that "doing business in India is difficult and costly. The Indians are difficult to negotiate with; they sue; they don't pay; and the legal process is slow". The report also points out that of the 22 US companies which accompanied former president Bill Clinton to India in April 2000, only one company actually invested in the country.

According to the report, Washington policymakers also had the impression that Indians didn't understand the "economic dimension of the relationship". The report quotes a US official as saying, "Among all the high-level visits in late 2001, the Indian finance minister had not made a trip to Washington as of January 2002, suggesting to American policymakers that economic relationship was not a priority."

This view seemed to have been reinforced by the visit of national security advisor Brajesh Mishra in January 2002. Says the report: "During a recent visit of Brajesh Mishra, he backed out of an appointment with the US secretary of treasury, Paul O'Neill, that could only be scheduled at 7.30 am. Mishra's behaviour left the impression that the economic discussions were not important enough to get him up that early in the morning."

Macdonald's analyses and insights, in her 153-page report, available with Outlook, is based on 82 interviews—42 Americans and 40 Indians—and focuses on the impediments that exists in forging a closer Indo-US relationship.

Some of the comments in the report should alert the defence establishment, especially when moves are on to build a closer Indo-US military relationship.

Though arguing for a more meaningful Indo-US engagement, the report seems to have identified many stumbling blocks. For example, on the subject of 'Residual Perceptions of Each Other' the report emphatically states that the US military continues to harbour a "residual distrust for the Indians because of their past relationship with the Soviet Union". Says a US general: "We distrust any military that flies MiGs. This is an ingrained perception that has not yet faded." Another colonel, quoted in the report, says: "Frankly, we will not share high technology with the Indians while Russian technicians are running around the country."

The report says the Americans interviewed complained about the inability of Indian defence officials to "think strategically". For example, several American policymakers described Indian briefings at the defence policy group (DPG) and the executive steering group (ESG) as "elementary and pedestrian, lacking any elaboration of strategies." In fact, the report says that American briefings on the Indian military's new Integrated Defence Staff was far more comprehensive than the Indian briefing itself.

Continuing in this vein, the report talks of how Indian military officers lack the training to conduct rigorous cost-benefit analyses required to understand the implications of their military operations or to guide their budget/resources decisions. For example, instead of analysing the costs, trade-offs and strategic implications of building a fleet of nuclear submarines, the "Indians fall back on Cold War arguments and canards to justify their decision". Academic training in geopolitics, history and patterns of organisation is lacking, the report states.

There are swipes at "Indian elites"—both in the defence services and the bureaucracy—who "thrive on fine-tuned arguments and logic", instead of being interested in practical issues. The report argues that the US should not be deceived by the Indian military's size. "They (US officials) believe the poor quality and lack of maintenance of India's weapon systems limit its ability to be a capable partner."

A number of American military officers interviewed were concerned that the "density" and "unresponsiveness" of India's bureaucracy are shaping the perceptions of colonels who will be generals in five years. Then, they might be less willing to work with the US. The report states that "an underlying source of frustration permeates" all American experiences with Indian bureaucracy and many Americans ask themselves: "Are the Indians uninterested in the initiative? Do the Indians know how to respond? Did a civilian bureaucrat kill an initiative for political reasons?" Indians interviewed in the report dismiss these problems as "insignificant".

To overcome the stumbling blocks, the report says, American officers have adopted a three-pronged strategy to engage their Indian counterparts by sending initiatives to the mea, mod and the services.

Interestingly, the Macdonald report makes a strong observation on India's "hyper-sensitivity to sovereignty".In this context, a foreign area officer (FAO) is quoted as saying: "Indians won't participate in a multilateral force until it is under the umbrella of the UN. If the multilateral force has no UN support, then the Indian military's participation is seen as compromising India's sovereignty."

The army headquarters has refused to react officially to the Macdonald report. But several serving generals Outlook spoke to have said the "prejudices" on the part of the Americans have been "blown out of proportion". Says a general: "This is what happens when there is so much analysis on a subject, which does not require such thorough examination. It leads to paralysis!" Another senior defence official in South Block says: "Let the Americans come down a few notches from their lofty pedestal and we are willing to meet them half way."

If the conclusions arrived at in the report are any indication then there is no question of the Yankees doing that. The ball, as Macdonald would have it, is almost always in the Indian court.