And markets across the globe fell. How India must cope. 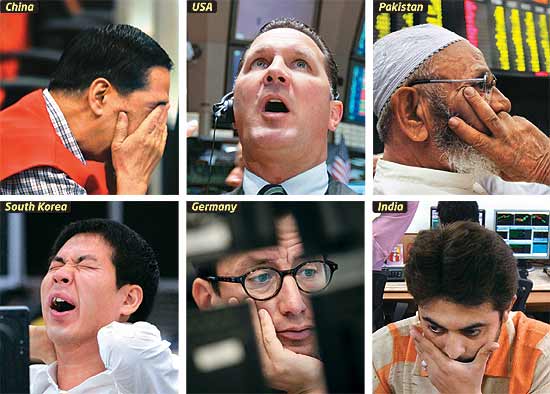 Three years ago it felt like financial doomsday. By now we know that it isn’t quite so dire. As the US and Europe economies grapple with debt demons and downgrades, there’s a more measured response in India. The markets are restless, but not suicidal; no banks or companies are out of cash. But with the hindsight of experience, most experts agree that the Indian economy, struggling to check inflation while sustaining eight per cent growth, will be impacted. Here’s how:

We already knew the United States and Europe were in trouble. Does this recent crisis change things?

Though there’s no immediate financial crisis in the West, economists contend the problem is a lack of socio-political confidence. “I see it as Stage 2 of the global financial crisis as it is not a new problem but an extension of the first crisis,” says Dr Arvind Virmani, India’s representative to the International Monetary Fund. It also reflects drift. In the US, the mortgage issue—which led to the 2008 financial meltdown—has largely been ignored. And Europe has been struggling for a while with its flawed process of economic integration, particularly in countries like Greece, Portugal, Ireland and Spain.

There’s one major difference between the scenario now and three years back. Rakesh Mohan, former Reserve Bank of India (RBI) deputy governor, points out that in the US, “while the fiscal deficit and sovereign debt is high, it is the breakdown in the political decision-making that is the problem”. There’s no option, really: as in the past, the US government will step in to try solve matters. Generally, there is hope of the US being able to solve its problem in the medium term. With an aging population and social rigidity, Europe is a tougher call. As such, emerging markets cannot depend on demand growth from European markets, or look to EU banks and institutions for funding.

So how is India likely to be affected by the current economic crisis?

Pinning hopes on an 8.2 per cent GDP growth this fiscal, policymakers have been at pains to emphasise that India’s growth is led more by domestic demand, which is why India could log 6.8 per cent growth even in 2008-09, in the midst of the worst phase of the global financial crisis. “Downside risks to growth may have increased after global developments, but they are likely to have limited impact,” says an optimistic RBI. Actually, the central bank’s job has gotten tougher. So far, it has routinely increased interest rates to check inflation. With growth further threatened, it may have to focus more on addressing those concerns.

India’s growth, driven by domestic demand, has endured many recent storms. But now, govt action is called for.

While the partly closed nature of our economy may provide some protection, some of the drivers of our economy—like the services sector—are likely to be affected. “There could be a direct impact on services trade, like after 2008. Further clampdowns on outsourcing (in the US) will be a major setback,” says Biswajit Dhar of ris, a think tank. Experts like Sanjeev Sanyal of Deutsche Bank say Asia—which currently dominates the emerging markets with 60 per share of consumer demand—provides some answers. This could well offset the dip in US demand.

Clearly, India must strive for closer integration with other developing countries. The process is on, but it may not totally immunise us from the impact. Devesh Kapur, director, Centre for Advanced Studies of India, feels India is unlikely to achieve export targets in 2010-11. “India’s growth will have to rely considerably more on domestic demand. For this to happen, India will have to seriously address the incredible levels of governance-related malaise that has set in under UPA-II,” Kapur stresses.

How will this impact UPA-II’s battle against persistently high inflation?

Policymakers are banking on a sizeable drop in crude and other commodity prices to help ease imported inflationary pressures. The promise of a likely downward revision in the price of petroleum products if global crude prices fall further is the only consolation that the Indian government has so far been able to hold out to consumers and industry. Giving a clue to the central bank’s thinking, RBI deputy governor Subir Gokarn said a fall in commodity prices is likely to impact the pace of rate hikes, which have happened 11 times over the past 15 months.

Although food prices seem to have stabilised to some extent, the prices of manufactured products are still on the upswing. As India looks forward to easing imported inflationary pressures, commodity experts are not too sure the drop in prices will be sharp or last for too long. Also, while imports may be cheaper now with the rupee appreciating against dollar, there is no knowing when the reverse trend will set in. Vikram Murarka, chief currency strategist at Kshitij Consultancy Services, foresees the dollar strengthening against rupee (to levels over `46-47) and possibly other currencies in 6-12 months. Together with slower economic growth and an anaemic stockmarket, it may not exactly be good news.

Three years ago, the Indian stockmarket crashed. Will it continue to mirror global trends?

Advice for the investor: ignore the overreaction in the markets, stay invested, keep buying equity for the long term.

Markets are driven by perception, that most fickle of barometers. Of course, domestic investor sentiments have taken a knock (as always, some argue that this was necessary) in tune with global trends. But it doesn’t look like a freefall situation. In the near term, market experts feel risk aversion will remain high, impacting investment flows to emerging markets, including India. The government recently upped the limit to which individual foreign investors can invest directly in the market through mutual funds. Expect more such feelgood measures.

Retail investors should be aware that data has shown that Indian markets aren’t really well-developed playgrounds; for one, institutional players dominate them. In such a scenario, it’s best to stay calm and invested, and make fresh purchases for longer-term periods. A big-picture view on the sustainability of the “India story” is necessary in times like these, argue financial planners. That’s actually the only reasonable tack, given the typical market view. “We are still in a hypersensitive mode as the outcome is not known, nor how the crisis will be handled,” says Vikas Khemani of Edelweiss Financial Services.

Doesn’t all this make a scam-tainted government’s job tougher?

The mood is indeed sombre in industry. To reverse the lagging growth sentiments, there are expectations that the government would step up on reforms. Describing the recent global economic events as a “warning to the political systems to put their houses in order”, Virmani stresses, “unless we do so, the growth will be fitful....” There are also concerns on ballooning fiscal deficits, which experts feel can be addressed only by keeping to the 13th Finance Commission’s recommendations.

“Future government initiatives to significantly reduce subsidies for fertilisers, foods, and fuels would be a positive factor,” states Takahira Ogawa, Standard & Poor’s sovereign analyst based in Singapore. Rakesh Mohan sees the government push for a new land acquisition bill as a major positive signal for reforms. Some clearly feel the 2011 crisis could jolt the UPA out of reforms complacency. As they say, that would be a positive outcome.

‘BCCI Should Be Made Accountable’