Some Little People In A Big Fight 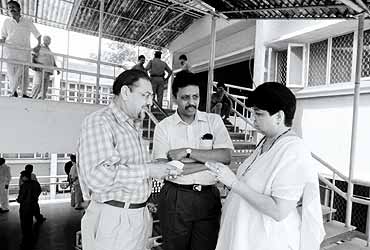 A fortnight ago, some six years later, the AVUT family's struggle and steadfast belief in justice won over the cynicism of our times. And the Delhi High Court—in an unprecedented ruling—directed the owners of the Uphaar theatre, along with civic authorities like the Delhi Vidyut Board, to pay the victims' kin compensation to the tune of Rs 17 crore, plus other damages amounting to over Rs 3.5 crore. "Let them appeal against the verdict in the Supreme Court, we'll see them there. Also the criminal case against them is still on, we'll fight them to the finish," declares AVUT's Neelam Krishnamoorthy, who has attended over 1,000 hearings in various courts after she lost both her teenage children in the fire. "The lesson here is that there's no getting away with harming little people, because when little people get together they can take on the most powerful."

How they inspire, these simple lessons. Lessons we have been compelled to unlearn over time. That power belongs to the people. That together we can take on the world. That justice does prevail. Yet periodically, if rarely, these simple lessons do make fleeting appearances in today's world. And headlines announce that an AVUT, a small victims' collective, has won the day against power and pelf: won against the Ansals, one of India's richest realtors, against a typically insensitive government, and won despite the snail's pace of the judiciary. This, not as activists but as victims, plunging into spontaneous struggle, without any anticipation of the issues, the time-frames involved, without prepared leadership. And there are many like AVUT in the country, far-flung little groups of people affected by some calamity or the other, groups that have decided it's best to fight their own battle, to alleviate personal suffering, and even to ensure that others never suffer like them again.