The preparation for Kerala’s elections is both long and full of quirky traditions, but this time some of them are facing unexpected changes 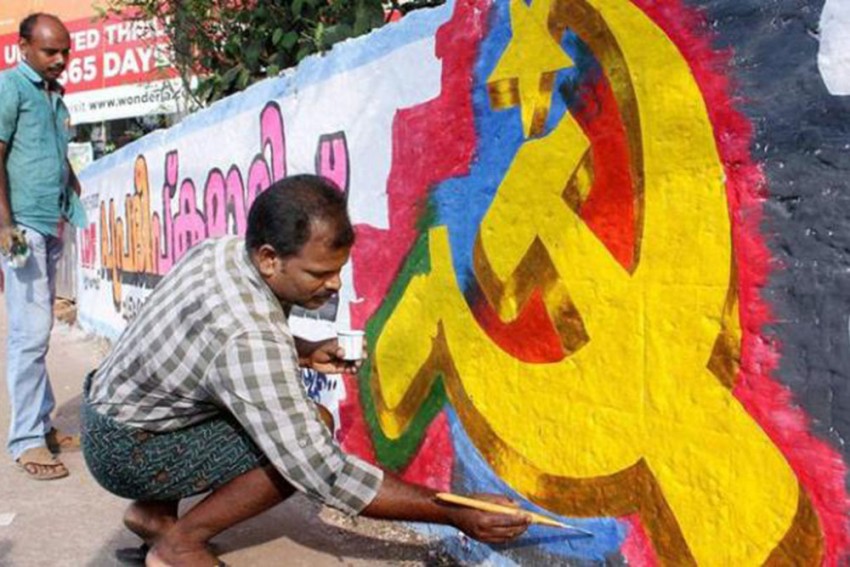 Hired by the LDF, a painter rushes to fill a wall
Photograph by PTI
N.S. Madhavan May 12, 2016 00:00 IST Somalayalis And Their Walls 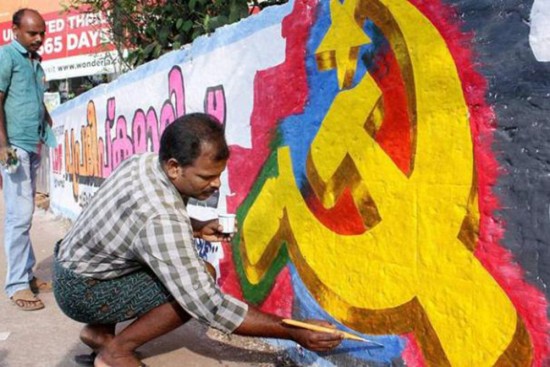 Elections in Kerala are not like anywhere else. Malayalis have raised it to the level of a rite, a quinquennial Onam or Vishu, with well-laid down steps that are seldom transgressed. Preparations for them start well in advance—a couple of years ahead of the actual event. That’s when Kuttappan of Pullepadi, Kochi, would get out in the night on his cycle, with his friend at the back, carrying a can of paint and brushes. Kuttappan’s destinations are walls at prime locations on the roadside. On them they would draw these magical letters in upper case, ‘BKD LDF 2016’, and, presto, the surface belonged to them—for graffiti is unchallenged till the election is over. I picked up Kuttappan because I know about his pride in getting a head-start, and reminding his rivals in other parties that the election clock had started ticking.

Meanwhile, Kuttappans of other parties, all over Kerala, would be cycling nocturnally, ‘booking’ walls for their parties. Only the middle set of letters change to UDF or NDA. Once the message is written, unwritten protocol is that other parties respect the ‘ownership’. No party avariciously monopolises all walls: there have to be surfaces for all. Competition is for new walls, where early birds like Kuttappan have an advantage. Private walls go to parties favoured by their owners, if they don’t mind their walls turning into political advertisements. Calli­graphers move in to write slogans or pos­ters are stuck on them only days before the election, when names of can­didates are known.

Roughly around the time wall spaces are booked, a spate of another type of bookings happens: air tickets to the Gulf. Leaders of all parties go there, in search of money and votes. Not only top leaders, likely candidates also go there to attend meetings with their constituents. The Gulf migration from Kerala also caused another brain drain—of the political kind. Many promising youth leaders, firebrand speakers in college, are doing things like laying pipelines or selling ad space in the Gulf. These are assets the parties want with themselves in Kerala during the elections. The Gulf is also the place to look for votes; in some northern Kerala constituencies, candidates bring voters from there in chartered flights. With narrow margins deciding most of fights, every vote counts.

“This election, the traffic was heavy,” a friend from Dubai said. He named half-a-dozen leaders who made more than half-a-dozen trips there. “Not for men,” he said, “more for money. This time it is ‘tight’ for them. Remember, their main source has dried up.”

The allusion is about liquor barons, major election ­financiers, going tight-fisted this time. Bar owners are more than sulking; there are now doomsday speculations. Oommen Chandy’s UDF (United Democratic Front) government had closed down most of them, and their manifesto was not a let-off. Meanwhile, the LDF (Left Democratic Front) is maintaining a coy ­ambivalence, fearing backlash from women. With no help coming from any side, the bar owners are not loosening their purse-strings. Once the election scene warms up, the men from the Gulf start coming in. Also from Bombay, Bangalore and other Malayali-rich cities, and from within Kerala; they all home in to their constituencies. They would matter-of-factly tell you that they are on ‘election leave.’ They waste little time before plunging themselves into ‘squad work’—the bricks on which campaigns are built in Kerala.

In the 2016 assembly election, many places are witnessing change to kutumbasangamams. They have grown—with pandals and regular meals.

Squad work would start with in-depth scrutiny of neighbourhood voters’ list. Voters are categorised as already converts, in opposite camp, newcomers and of unknown persuasion. Metadata about their caste and social status are sometimes ­secretly maintained. Without exception, they all need to be canvassed, with varying degrees of intensity. In olden days, the squad would sieve voters’ list thoroughly, to filter out those who were dead or absent. Suitable substitutes with similar age and sex would be found for the election-day impersonation. With hundred per cent coverage of voters’ identity cards in Kerala, and ­uncowed election agents in polling booths becoming more ­voluble, the practice is now dying down.

Along with squad work comes what’s called kutumb­as­­angamams, or neighbourhood meetings. A sympathiser’s house with a big compound is identified, and neighbours are invited. A pickup van with red plastic chairs would then come. Irrespective of the party ­affiliations, chairs are aways red! Some invitees, women in housecoats, men in lungis, would trickle in. The candidate would then speak about himself, and others would speak about the candidate. Unbeknownst to participants, squad people would be noting down names of absentees. There would be a special round of squad work for them. Tea—yes, it has to be always tea—is served, paper cups are littered, and the pickup van would then move on. 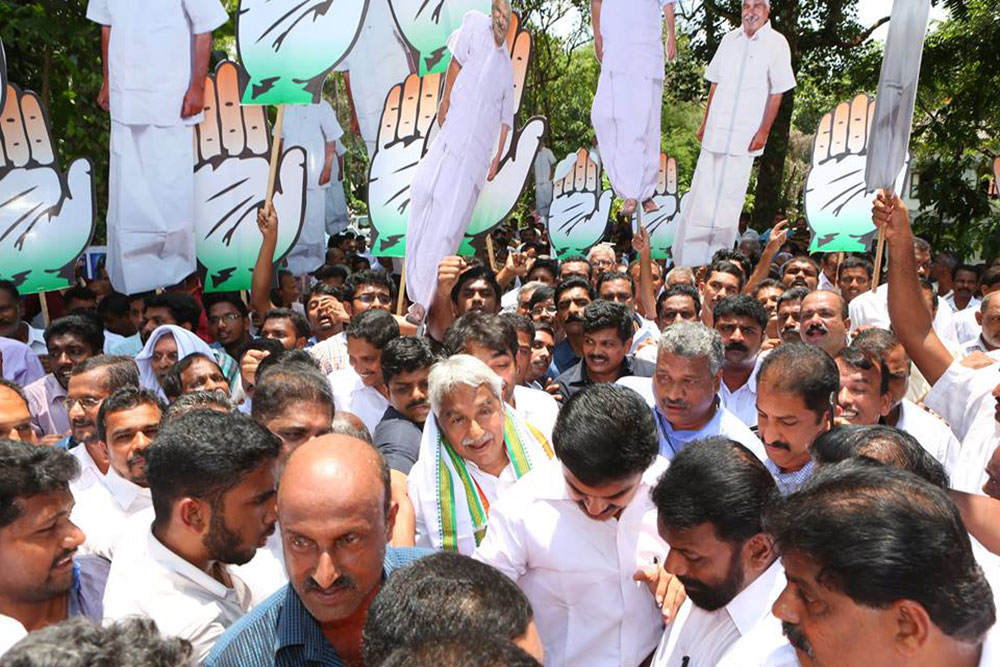 UDF’s Oommen Chandy at a campaign in Kerala

It was a simple, effective and inexpensive way of election campaigning. In the 2016 assembly election, many parts of Kerala are witnessing a spectacular change to kutumbasangamams. They have grown—they are no longer places for neighbours to leisurely saunter in outfitted in homely attires. Pandals are now erected, PA systems installed, regular meals served, and attendance swelled. Squad people no longer have to note down names of absentees, because it is always a full house. Such is the power of heavenly aromas wafting from cauldrons of chicken biriyani. A friend, who is a candidate, said, “Kutumbasangamams have hit our pockets badly. What used to be a few hundred rupees' affair, is now costing more than hundred rupees per person. They all come; in hundreds.”

The Election Commission is ­addressing the recurring problem of candidates with the same name by putting their pictures—for the first time—on the EVMs.

Campaigns are not always cosy and homely like the neighbourhood soirees. A deadly ruse used in Kerala by the political parties is to prop independent candidates with the same name as the main opponent. Many well-known leaders have slipped on the banana-skin of namesakes. The most famous example is that of the present Congress chief of the state, V.M. Sudheeran, who lost an election almost by the same margin as the votes polled by his namesake. With common Malayali names like Babu, Moideen, Rema, candidates are easy prey to the namesake stratagem. The present election is most surprising in that department too, because a candidate with a not-so-common and not-so-Malayali name, Shreyamskumar, found a doppelganger in an opposing candidate with minute spelling variation—Shreyamsakumar. The Election Commission is ­addr­essing the namesake problem by putting candidates’ pictures, for the first time, on the EVMs. This move has made a dramatic impact on the campaign materials. Old style candidates’ posters, towered over by their national or state leaders, are seldom found now. Candidates have gone solo; it is only their faces on the posters, subliminally drilling their visages into voters’ minds. Election campaigns end in Kerala in a dramatic fashion that is not seen elsewhere in the country. It is called kottikalasam, or conclusion by drumbeats. Processions of all political parties, with drums and cymbals, move to village junctions and town squares, with their flags aflutter. The din of drum grows louder. Finally, in a frenzied crescendo, the bands mass up. At the appointed hour by the Election Commission to cease campaigning, they all fall silent, in one beat. It is democracy’s cathartic moment.

Social media has become a conventional weapon in any election, used by political parties and their internet brigades. But in Kerala the buzz is created by politically oriented individuals, millions of them at home and abroad. They are past masters of outrage; an unlikely victim was the tennis player, Maria Sharapova, only for asking who Sachin is. This election the social media—in Kerala, it is all about Facebook—is hyperactive.

It is raining memes. Prime minister Modi, during his campaign, said that sixty years of rule by both the fronts has ruined Kerala and if the NDA is given a chance, they would develop Kerala, like the states they are ruling. Internet went on the overdrive and by the evening, every schoolkid in Kerala knew that 47.25 per cent of households in Gujarat have no toilets. Graphics of comparative Human Development Ind­i­­­ces of Kerala and Gujarat flew around on Facebook.

There is also a Maharashtra connection to the ele­ctions this time. It is a double-headed drum called Nasik dhol finding favour in processions. Purists are saddened that Kerala, with a great tradition in percussion music, and with its temples famous for percussion ensemble music, sho­uld go in for such a non-versatile import. Truth be told, pulsating Nasik dhol beats and this colourfully dressed up players do spice it up.

There are about 21,000 polling booths in Kerala, and the Election Commission had found about 1,200 of them to be ‘critical’ and ‘vulnerable’, most of them falling in the districts of Kasargod, Kannur and Kozhikode. With such large tracts of peace, democratic choices are easier to exercise. That also helps a place to evolve a special idiom about it. Politically aware and normally argumentative, the Malayali is however psephologically unadventurous. Ask anyone to predict what is going to happen in the election, they will peevishly reply, “It is very ‘tight’.”

(N.S. Madhavan is a renowned Malayalam writer whose last book to be translated into English ­was Litanies of Dutch Battery)

As with the rest of the country,the beef controversy is a steady focus of political attention in Kerala. Both the  LDF and the UDF are raising the issue of BJP’s harassment of Muslim traders in neighbouring Karnataka to keep the voters from going for BJP in north Kerala. The main fight is happening for the seats in Kasargod and Manjeshwar, both Muslim-majority areas, where BJP has been runner-up in the elections for many years.