This hatred for the Mughals and unrequited admiration for the British is something inexplicable in most Hindutva leaders. 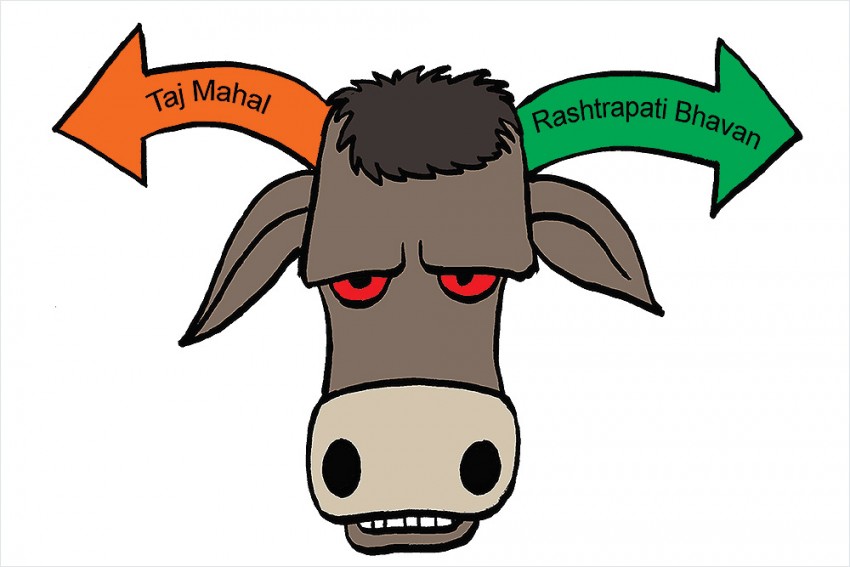 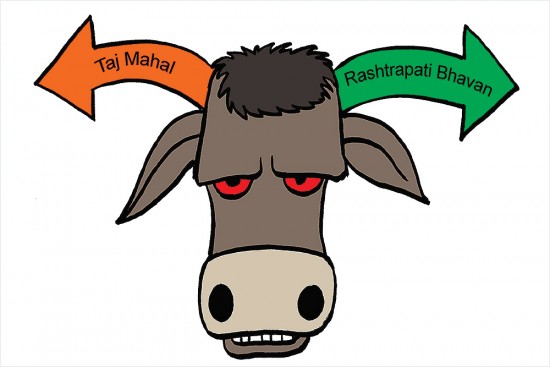 After quibbling over the piety of the pataka and the right to make others choke on Diwali, now it is the turn to taint the Taj, yes, that enchanting mem­orial for love (or rather, the will of the womb). Sangeet Som, a BJP MP, earlier booked for riots, claims the Taj was built by traitors. UP CM Yogi Adityanath, also from the BJP, insists that the good sons of Bharat mata shed blood, tears and sweat to build it. Now, I have never been a fan of Azam Khan. In fact, I detest the politics of Muslim vote traders. They thrive on the insecurity of the marginalised minorities in the ghettoes and do virtually nothing when Akhlaqs are lynched or Muzaffarnagars go up in flames. Khan had shown greater concern in sending cops after his missing buffaloes. I wonder whether he got his buffaloes back, or else the cops could have got a pair of goats to confess they were Khan’s buffaloes. But this time even Khan made sense when he reminded the BJP MLA of the Viceroy’s House. Why go back several centuries and talk about the Taj, let us discuss the Rashtrapati Bhavan instead. At least, the Mughals didn’t take anything away from this geographic entity called Bharatvarsha. They came here, fell in love with this land, married into local ruling families and built beautiful, breathtaking monuments to love, stuff Khan or Som don’t understand.

An intellectual from western UP had fam­ously told a few of us at a gathering that love happens only in Bollywood movies. He was explaining khap panchayats.

But this hatred for the Mughals and unrequited admiration for the British is something inexplicable in most Hindutva leaders. Could it be because of V.D. Savarkar’s servility, his infamous apology and the promise to work for the British empire? After all, he was the father of Hindutva ideology. Whatever be the reason, no rabid radical has ever talked about bringing down the Viceroy’s House. Two villages—Raisina and Malcha—were razed to build the greatest symbol of British power in India. Instead of searching for reasons to hate that beautiful white marble structure in Agra, Som can actually help the descendants of Kallu and Nathu of Raisina village, who had refused to accept any compensation for 100 acres of land lost in Raisina village and quietly migrated instead to Palwal in Haryana. Curiously, the rabble-rousers never talk about the temples of Raisina and Malcha that were demolished to build the seat of power. Or about the contractors who gave false testimony against Bhagat Singh to win business and titles while building New Delhi. After 100 years, when the great grandchildren of Kallu and Nathu visit Raisina Hill, there is no apparent hatred. Sure, there would be a sense of loss, particularly bec­ause of their present penury. But they don’t share the manufactured angst against a 470-year-old building that doesn’t bite.

Herein lies the difference between Gandhian nationalism and Hindutva nationalism. Gandhi fought a real enemy, the British empire, without hating the British people and got them to quit India after 200 years of colonialism. Savarkar, while supporting the British, created a false enemy, injecting hatred among his disciples. This is probably why the Taj is an eyesore for people like Som, while the Viceroy’s House and Parliament House, and those British-style Lutyens bungalows that house his leaders at present, are all places of power and pride.

#SocMed The Fifth Column Is Online