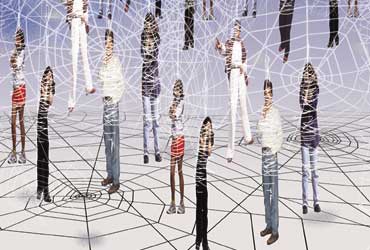 Bangalore's Malathi Srinivas is also trying to come to terms with the havoc the Net has wreaked on her marital life. "It seemed just too unnatural to tell friends that I've lost my husband to the computer," she says. "That he ignores his children and me to spend time with strange women on the Net, that I suspect he even meets up with some of them." Till hysterical spousal fights, and bouts of depression later, Malathi sought a marriage counsellor's help. In therapy for three months now, she's learning to reach out and "retrieve" her husband: "It's weird, but my therapist tells me there are many like me visiting her, trapped by the Net."

Long after Internet Addiction Disorder has been pronounced a diagnosable physio-psychological condition the world over, mental health specialists in India are beginning to get their round of Net-afflicted patients. They are men and women who seek love, adventure and respite from real world in Cyberia, only to become its prisoners. People who suffer real pain that accrues from unreal relationships they forge on the computer, who cannot fathom how and when their virtual lives overtook their real ones. As also those shunned by these new generation Net Addicts: neglected spouses, even children, hurt and humiliated at having lost out to a computer.