There was no school around. So a family in Assam went ahead and got one built for all its kids. 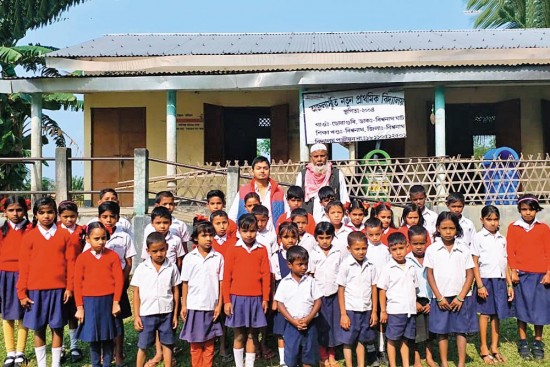 For seven-year-old Jaynal Abe­din at Suwaguri village in ­Assam’s Biswanath district, sta­ying at home or going to school makes little difference. Jaynal studies with his 60-odd siblings and cousins in the same school—the Ajalashuti New Primary School. “It’s almost like our home. All the students are my cousins and we all stay together,” says Jaynal who studies in class II. In fact, more than 95 per cent of the students at the Ajalashuti school, established in 2004, are from the fam­ily of Hamed Ali. The 65-year-old farmer had to drop out after ­lower primary school, but wants the next generation from the family to study further and get to live better lives.

The school, though named Ajalashuti, is loc­ated in Suwaguri, where Ali and others shifted after losing their land to erosion due to the Bra­hmaputra river. It is on the way from Biswanath Chariali to Biswanath Ghat. “After arriving here, when they realised there was no school nearby, Ali ­donated land for building one,” headmaster Naba Das tells Outlook.