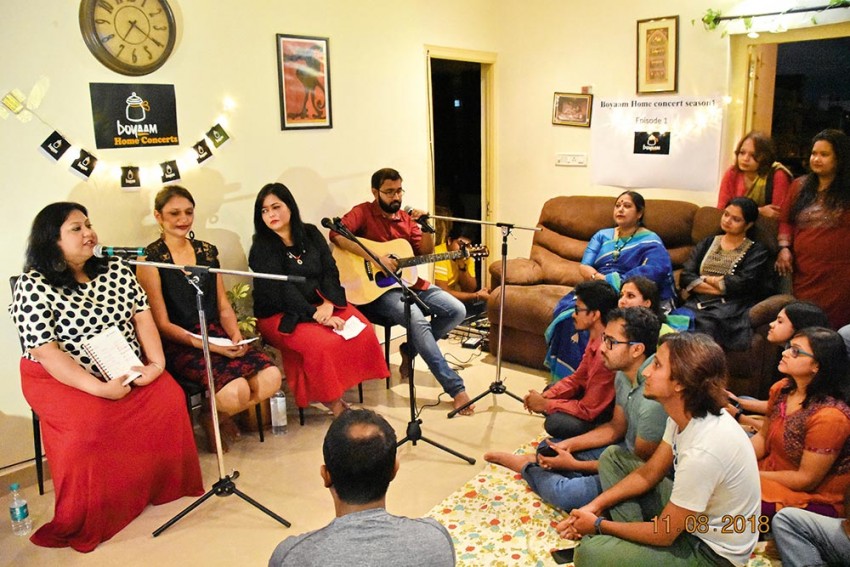 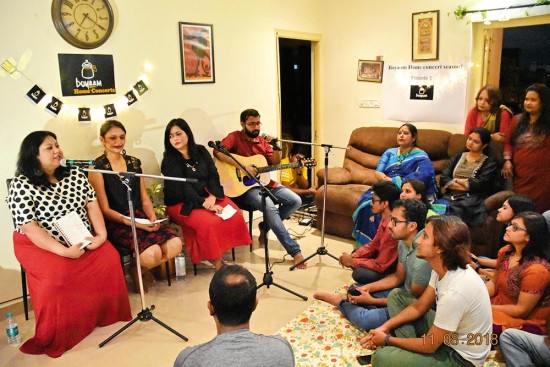 In the beginning, there was the family parlour—where a thousand stories unfolded, family legends were birthed, regional myths cemented, gossip abounded aro­und ample proportions of aunts and uncles. Further on, the artist’s atelier and the literary salon were specialised extensions—sites of untrammeled debate and intellectual ferment. If late 20th century living rooms had curdled into sterilised areas of polite talk and genteel entertainment, another spell of warm spring is here—a much-needed thaw.

As you approach the living room of Swagata Majumder Bhattacharya in her Bangalore home, you hear the sound of singing: Itti si hansi/ Itti si khushi…. (A bit of laughter/ a bit of gaity…). You’ve just bumped into a ‘living room gig’—which combines the authenticity of a performance with the flower vase cosiness of a drawing room, and it’s catching on with singers, bands and their fans. Referring to the song, now in its dying refrain, Swagata says, “This is a fav­ourite song of mine for a gig. It transports you to a different world.”

Swagata’s ‘Boyaam’ is an event curation platform featuring relatively new performing art­istes. “We choose artistes carefully. Our target is to find a fresh ensemble of performers who are screened and handpicked. They could be singers, elocutionists, thespians, instrumentalists, stand-up comedians, even mime actors—all performing arts are welcome.” 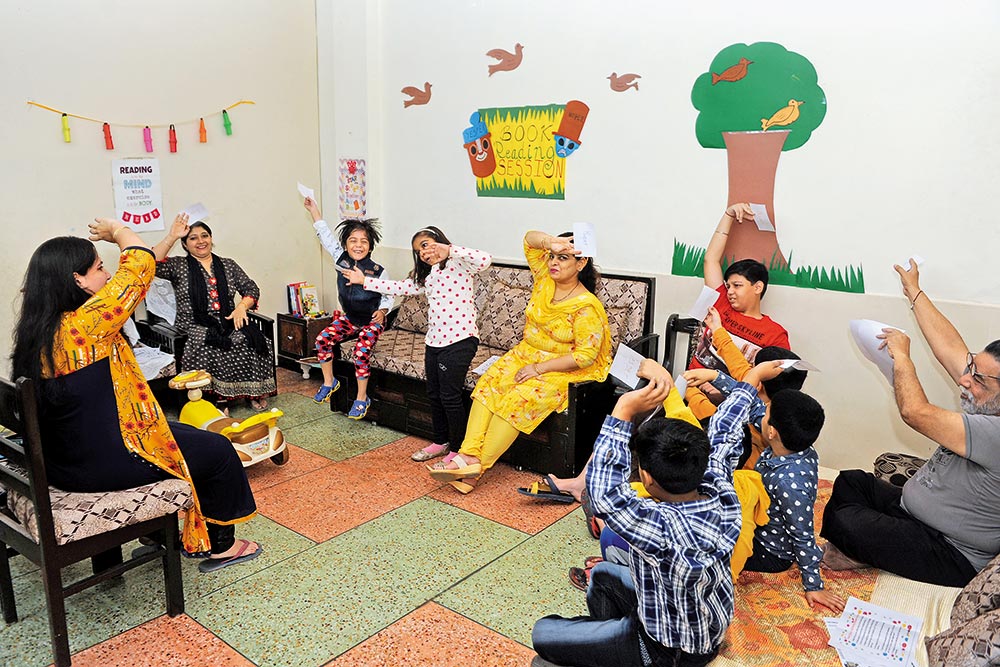 Boyaam is a Bengali word for a large glass jar that stored, for generations, savouries and pickles—now largely confined to literary memory and period films, and redolent of pre-plastic childhoods. Swagata says, “It relates to the sheer joy of a jar full of eatables, to be enjoyed of a sultry summer afternoon. Boyaam is a metaphor for the unadulterated joy found in a musical space like this.”

People know they can get live, original music at Boyaam. They turn up at rehearsal sessions too.

Every weekend, Swagata’s living room sheds its mundaneness; near at hand are musical instruments like the didgeridoos from Australia, aboriginal clapsticks, tongue drums, percussion shakers, guitars, the tabla—all collected by Swagata and her husband. Her home is the go-to place for people passionate about music—those who create it and those who devour it. “We have hosted impromptu concerts for a couple of years now. This year, we gave a name to it, and Boyaam Home Concert was born,” says Bhattacharya.

On a concert day, the furniture is rearranged, string lights are hung. Sofas make way for colourful durries that can seat about 35 people. The dining table beyond becomes a food counter laden with fritters, samosa and coffee mugs. However, the pleasures of that table can be partaken only after the two-hour concert. The Bhattacharyas’ spare bedrooms become control rooms; the master bedroom mutates into a green room. People write their comments on the chart-paper covered ‘Boyaam Wish Wall’. Says Swagata, “We have some professional home studio set-up like microphones, audio interfaces, focus lights, the rest is rented. The concert is recorded live, so that we can make videos.”

People know that at Boyaam they can listen to fresh and live music. Though not every Saturday is concert day, musicians gather for rehearsals on most weekends. “We have had people coming over to sit through rehearsals too,” adds Swagata.

Naturally, the Bhattacharyas’ living room gigs aren’t confined to music—they have become a venue for food and fashion pop-ups as well as for theatre, storytelling and recitation performances. Swagata’s poems of choice are those that embody strength and resilience—Amrita Pritam, Srijato, Joy Goswami, Tagore, Neruda and Gulzar. Language is no bar. 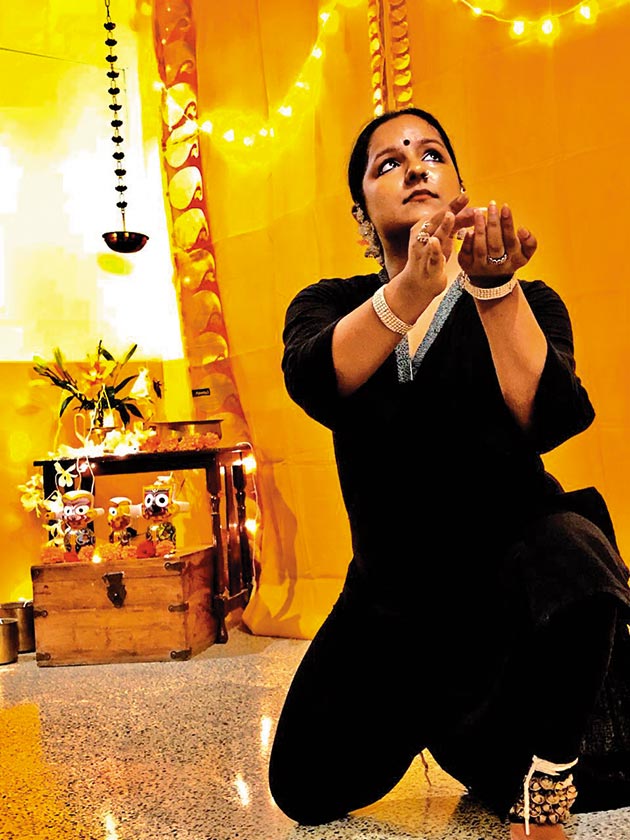 Manu Mathew of House Concerts India started living room gigs four years ago at a musician friend’s basement in Gurgaon. “It was started as a fun community project at a time when Delhi didn’t have dedicated spaces which encouraged original music and artistes had to fight for attention between sizzlers and TVs screening live sports,” says Manu.

House Concerts India is a first-of-its-kind, artist-focused initiative aimed at creating nooks for art within our urban cacophony. Each concert brings together music, arts and culture to the intimacy of private spaces. The movement is volunteer-driven and strives for a different flavour to each session, derived from inputs by the participating community. “We started off in Delhi and have chapters in Mumbai, Bangalore and Pune. We started with live music; now we host monthly events around art forms like poetry, theatre, film-screening, live art and classical dance like Kathak,” says Mathew.

The vibe of the performing space and the musical inclination of the hosts create an alc­hemy of sorts—an idea takes amorphous shape, then an event is curated. The House Concert Delhi team works on a voluntary basis. “There is a suggested donation amount of minimum Rs 300 per person. All the money collected goes to the artistes at the end of the evening,” adds Mathew.

Ruchika Rastogi from Delhi, who conducts storytelling and book reading sessions from her living room, says, “I started my storytelling sessions from my living room a year back. They help us to return to our roots before television supplanted drawing room conversations.” It is ind­eed a welcome substitute for the unrelenting drone of a saas-bahu regime, or a break from the diminishing pleasures of pubs, malls and restaurants. Ruchika says a book reading session is more interesting if one plans the entire session beforehand. 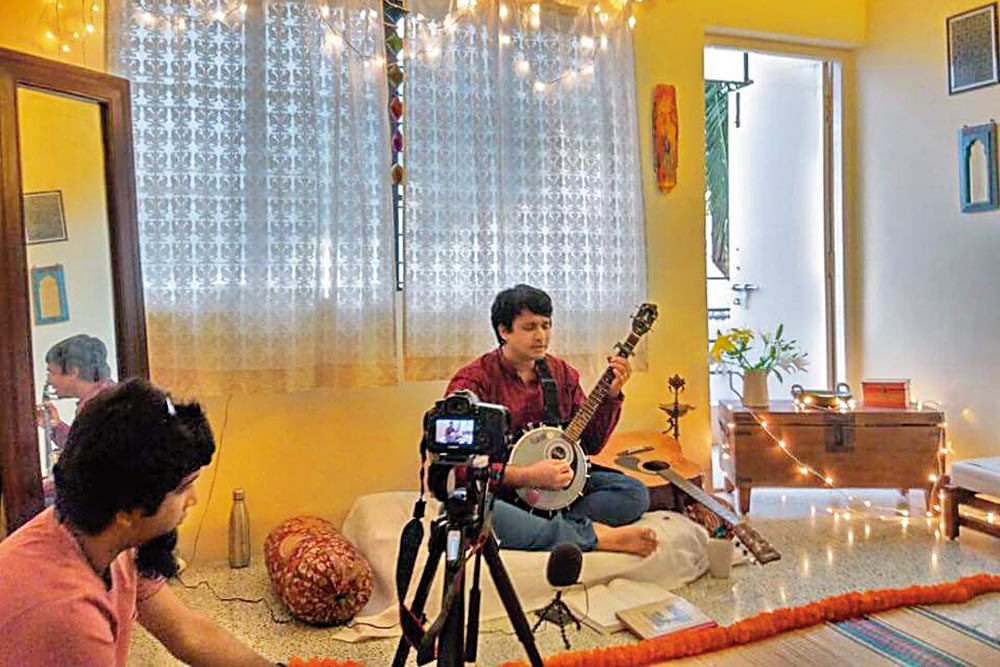 A Baul song being sung at Gurupriya Atreya’s living room.

Stories are humanity’s oldest entertainment and, when arranged around a theme, are irresistible. Toys and other props are important components of a session if children are involved. The stories themselves can be lightly-spiced real-life events to entirely cooked-up ones, and one can slip in a moral at the end when there are kids in the audience, though tales shouldn’t ever bear the cross of value education. Rastogi states that she prepares by setting up a book corner that displays and stores books.  “You can also prepare the corner with small cardboard boxes. Flowers, plants, a carpet and cushions make the session more attractive and inviting. Then I pick a story that I intend to tell; sometimes the audience demands a certain type of tale.”

Gurupriya Atreya’s The Living Room Kutcheri in Bangalore hopes to restore the glory of chamber music. An RJ and a classical singer, Gurupriya is trying to revive chamber concerts, which feature a small ensemble of musicians. It’s a revival of the Indian home jalsa, or its Western equivalent of a quartet, quintet, or a singer at the piano playing in a living room. Says Atreya, “We launched in May 2017. It’s been a good run of over 20 performances. Our kutcheries take place one Saturday a month, based on the artiste’s convenience. My amma, Padmavathy Shrinivasan, was a singer and my fat­her, a composer. My parents hosted bhajans and satsangs at home during Navratri and Shivaratri. My brother and I grew up in a musical ambience.”

The Living Room Kutcheri, thus, is an example of the successful transmission of parental interest. “My husband Akhil Atreya and I decided to open up our home for the performing arts and build an intimate informal community to celebrate music and musicians who passionately pursue it.” Transforming her living room into a musical space came naturally too: “I keep it simple. We connect with people through social media. We ensure we retain the warmth of a home. I just clear the furniture from the living room, some marigold flowers adorn the floor, walls and entrance, fairy lights are put up and we are good to go.” 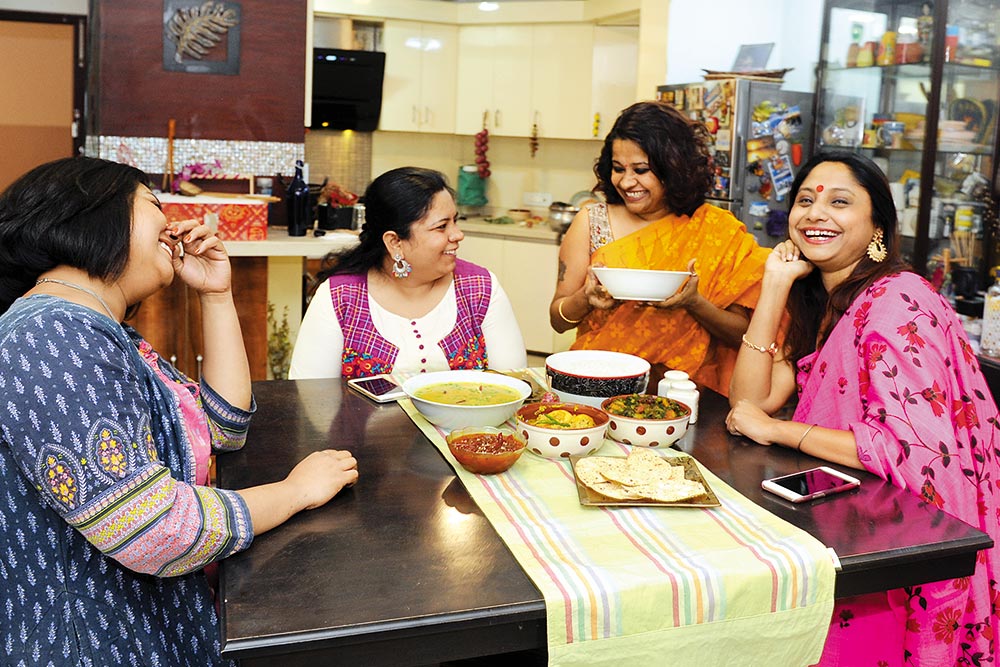 A pop-up at Ayandrali Dutta’s Noida home, and the fish kalia (left) and dim posto she cooked.

Food pop-ups have been here awhile, but those in the domestic space is a late variation, and the road to a delicious weekend meal no longer leads to a fancy restaurant. Noida-based Ayandrali Dutta’s food pop-ups have made a mark. The best meals, she feels, are spiced with stories and wrapped with memories. As a Bengali who grew up in the industrial town of Rourkela, her forte is Bengali and Odisha cuisine. If the theme for her pop-ups dep­ends on the season, it’s for authenticity. “Tho­ugh these days all ingredients are available throughout the year, there is a special taste to cauliflower during winter and hilsa fish during monsoon,” she says.

When she throws a hilsa-themed pop-up, Ayandrali makes four to five preparations of the fish. This winter, she made koraishutir kochuri (peas kachuri) with aloo dum using baby potatoes at a pop-up. Other dishes included fried brinjal, fish kalia (fish cooked in rich onion and tomato gravy with freshly ground spices), a curry made with spinach and peas, tempered with Bengali paanchforon, and deem posto (egg curry with poppy seed paste).

At the root of these delicacies lay the difficulty to adjust to a new palate—years ago, when she moved to Delhi, Ayandrali found it difficult to eat typical north Indian food. “My friends used to come home to eat food cooked by me and one of them suggested that I should organise pop-ups. I had my first pop-up a few years back with very basic Bengali food; it was a big hit.” Ayan­drali’s living space is as inviting as her food—a Buddha corner, a spatula with ‘awara’ written on it, her gramophone and books on travel and food. And all this in a warm, domestic orderly disorder, rather than spit-and-polish kemptness. Further­more, Ayandrali is warm and hospitable, qualities that communicate themselves well to food. But there are lines she has drawn—wastage of food is one. “I hate the idea of people wasting food. I always tell my guests that they can eat as much as they want, but never waste food at my place,” she says.

Plus, Ayandrali belongs to that rare tribe of stellar cooks who don’t stand on mystique—she opens her kitchen to everybody, so that people can have a look at, say, how she is frying the fritters. Starting from the kashundi (Bengal’s tangy mustard sauce) to the spices, Ayandrali only uses authentic stuff. And, since good food is life, it is a complete experience to savour.

Likewise, at other living room gigs and artistic performances: Meeting people, exchanging ideas, glorying in the music, poetry or stories, a perfect communion with kindred souls. Oh, the joy of it!

Beyond Netflix, Other OTT Platforms Have Sprung Up