The Idea Of ‘Indian Food’ Has Always Been A Khichdi

The nuts and bolts of ‘culinary Indianness’ are a bit loose, all floating in a borderless ma­­­rinade 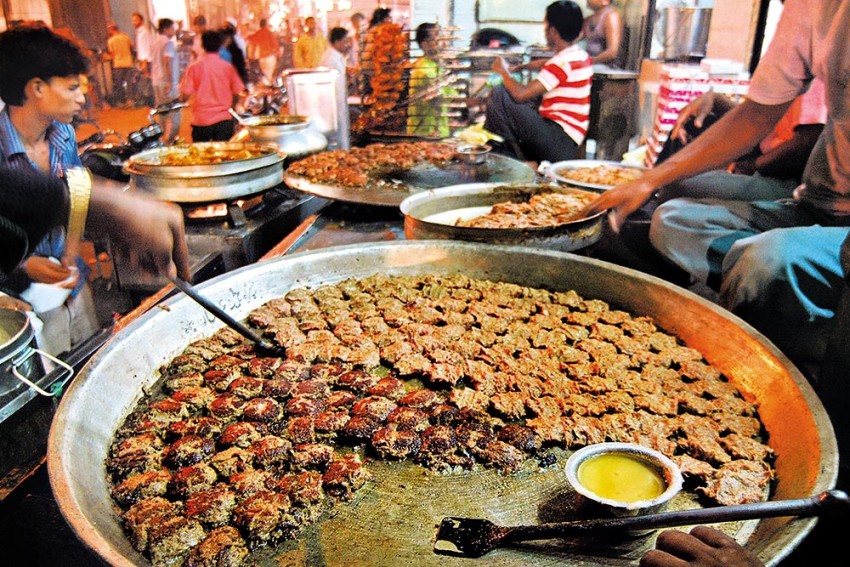 Aroma Of India
Tunday Kebabi in Lucknow
Photograph by Nirala Tripathi
Soity Banerjee January 24, 2019 00:00 IST The Idea Of ‘Indian Food’ Has Always Been A Khichdi 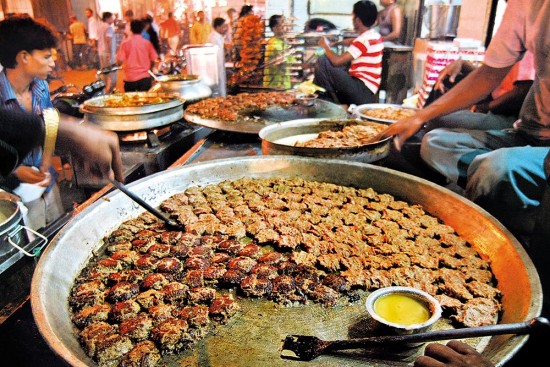 ‘Do you know what kapura are?’ ‘Of course, I do,’ I answered with some affront. ‘They are sweetbreads, and they are cooked with kidneys, and they are very good.’ Natives should always be natives…and I felt irked to be so probed around the issue of my own nativity. But Tillat’s face was kindly with superior knowledge. ‘Not sweetbread,’ she gently said, ‘They’re testicles, that’s what kapura really are.’” And with that o(w)ffal disclosure, says Sara Suleri in her memoir, Meatless Days, “…something that had once sat quite simply inside its own definition was declaring independence from its name and nature, claiming a perplexity I didn’t like.”

As far as analogies (and puns) go, this might be a bit nuts. But after about a week of prodding the words ‘Indian’ and ‘food’ from every direction—together and in isolation—I find myself in a Sara Suleri soup-shorba. No thanks to a spell of intense nationalist navel-gazing, stirred by the sentiments of an auth­­or of Pakistani descent, no less. An exercise that eventually led to the dodgy deduction that our ‘Bharat’ is really her ‘kapura’. Now, before you get your knickers in a twist, and send for goons to deep fry my anti-national gonads in pure desi ghee, humour me for a moment here.

Historically, we’re a nation with more perplexity than any of our ruling dispositions would have liked. So whether you call it India, Bharat, kapura or Amrutanjan Strong, our country has an annoying tendency to declare its own independence from all or any definition(s), and from its very name and nature too. Some might say, that is its nature. Willed into being—like most former colonies—by a virulent reaction to colonial excess, the concept of nation­hood as we know was as foreign and al dente to embryonic India as pasta carbonara to our great grandmothers. And the articulation of the need for a national biriyanisamosadosa dish?

Cooked over the residual heat of the Independence movement, India’s dream hadn’t even been reali­sed before post-war food shortages, the Partition, and later, famines and floods in the ’40s and ’50s drove it to distraction with hunger. It would also appear that suddenly rati­on cards were the passports to a better life. Even the Father of the Nation set about boosting the new Republic’s health and character with a meat-free and caste-free diet. Eager to establish its own legitimacy, the new government’s exhortations to ‘Grow More Food’ or ‘Miss a Meal’ now rent the free air like war cries. Crackling on the shortwave—rallying the nation together almost by habit, as if chasing ghosts of colonial masters past. ‘Calories’ and ‘vitamins’, freshly discovered at the turn of the century, were technocratic fodder; surgically removing food from its cultural context, one regio­nal wishbone at a time. For our nati­on-builders, Indian food—or at least the idea of it—was a pile of unpalatable numbers, underlining our crippling agricultural dependence, and a biopolitical carrot. 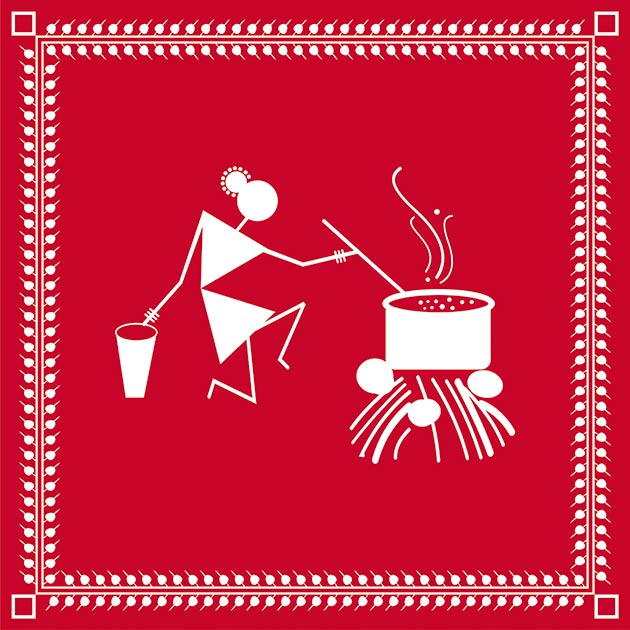 Meanwhile, somewhere in post-Independence Lahore, in a house with dovecotes on the roof, the Suleris were also ‘enduring’ their meatless days. Tuesdays and Wednesdays were earmarked for conserving flesh and fowl in Pakistan, and Mondays—at least in households with refrigeration—for hoarding flesh and fowl. And so it was that soon after the dust settled on the Radcliffe Line, in affluent Pakistani dining rooms, as also in many north Indian homes across the border, the aromas of qormas and kapu­ras, curried brains and kidneys, keba­­bs and biriyanis, were lifting wounded spirits. For who can entomb the fragrance of kewda in a box? Which border and barbed wire can stop food, language, music and culture from flowing where they must?

Sharing a meal with neighbours is not half as tricky as eating with your own family—especially if it has 133.92 crore members in it.

Speaking of borders, I remember, a couple of years ago, on a starlit drive from Zagreb to Dubrovnik, we briefly touched the once-troubled town of Neum in Bosnia. It looked suitably nondescript and uninterested in us, of course. But though we said little, those of us who were of a certain vintage were unsettled by memories of a televised war…when, suddenly, out of the sea blue, as if to cheer us up, a giant Taj Mahal rose out of the thin, briny Adriatic air. It was a signboard on the coastal freeway. An ad for a Bosnian restaurant in Croatia called Taj Mahal. Go figure! A quick look at the menu on our phones, and we were busy placing imaginary orders of shish ćevap and Bosnian beef ćufte. As honorary members of the United Nations of ćevap/kebab and ćufte/kofte, somewhere between land and sea, between nations and notions, we knew we needed no diplomatic sanctions to heap culture on our plates.

Back in the motherland, I’m happy to report, borders and conflicts are subjects of culinary curiosity now; another sharp counterpoint, if you will, to the one-nation-one-dish lobby. So much so, that last year, Mumbai-based home chef Ragini Kashyap hosted pop-ups called ‘Bordered’ to lift the cloche of discomfort and reveal the shared flavours and ethnic heritage of not-so-neighbourly nations. From the Indo-China edge to the two Bengals, the Tamil-Sinhala homelands to Kashmir and Punjab, the borderless landscape of Kashyap’s kitchen was determ­ined to be inclusive and warm. Whether the food was exciting or not, the flavours familiar or not, the conversations she brought to the table could hardly be bland.

And yet, as we all know well, sometimes, sharing a meal with the neighbours is not half as tricky as eating with your own  family—especially if it has 133.92 crore members in it. As a rule, family dinners are messy. But when men get slaughtered on the suspicion of storing beef, things get downright ugly. And so it is that lawyer-acti­vist Nandita Haksar’s new food memoir, The Flavours of Nationalism, attempts to conflate the personal and political through Indian ‘Recipes for love, hate and friendship’, even as she maps the palate of our national aspirations. Having grown up in a meat-eating Kashmiri Brahmin family, she mourns the disappearance of a way of life. She also mourns the disappearance of the ‘wedding cooks’ and the meatwala—who cycled from Old Delhi to their home to deliver pasandas from a blue wooden box, until quite abruptly, accusations of selling beef brought his trips to an end. Alluding to an event in 2017, when Twitter boiled over an attempt to anoint khichdi as the national dish—or as the Union minister of food processing industries, Harsimrat Kaur Badal qualified later as ‘Brand India Food’—Haksar says she doesn’t begrudge khichdi its new title, as long as its many recipes “from the bisi bele anna of Karnataka, to the pongal of Tamil Nadu, to the keeme ki khichdi of Hyderabad, to the simple moong dal ki khichdi” find equal favour.

Of course, the idea of ‘Indian food’ has always been a khichdi, a mishmash of multicultural elements that come together, quite magically in our Indian heads. But in the last few years, we’re beginning to celebrate its subtleties. Culturally aware chefs are carving entire menus, books and TV shows out of food yatras made across a respectable number of districts (out of our 723!). Ziro to Karaikudi, Kohima to Diveagar, Instagram is feeding the frenzy too, and staging its own minor mutinies with hashtags like #IndianFoodMovement. Armies of online home cooks are unearthing hyper-regional specialties that no one really cared about outside a 20-km radius before. Websites with names as impolitic as NativeSpecial.com, or the more kosher The­NortheastStore.com, are peddling everything from Srivilliputhur’s milky sweet palkova to Naga pickled pork intestines. Single batch kombuchas are sitting next to bottles of kanji in hipster coffee shops with single-estate brews. And sour, misshapen bimblis are being ‘rediscovered’ by turmeric latte-glugging millennials. It’s safe to say then, that ‘Indian food’ is finally coming to terms with its gurda-kapura, its own anatomy.

Can Priyanka Gandhi Vadra Deliver East UP To Congress?