Home  »  Magazine  »  Society  » Cover Stories  » Cover Story »  How Google Has Changed Our Lives: Is Life Without It Even Possible Anymore? 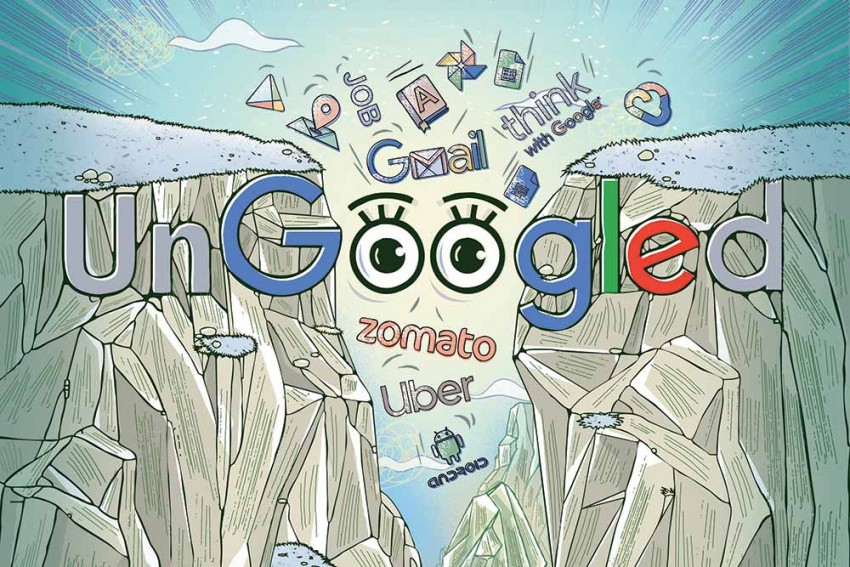 Illustration by Rajat Baran
Jyotika Sood July 10, 2019 00:00 IST How Google Has Changed Our Lives: Is Life Without It Even Possible Anymore? 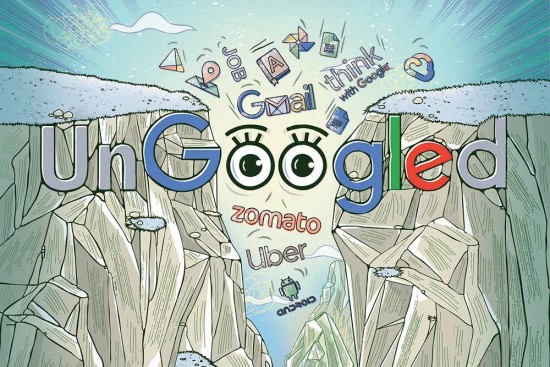 God...or Google. Someone actually makes that comparison in this story: “We don’t know God, but Google.” As you’d notice in its slightly odd phrasing, it could mean either of two things, depending on whether you’re using the noun or the verb. “We don’t know God, but we know SOMEONE/SOMETHING like God…as omniscient, omnipresent, omnipotent…that’s Google.” Alter­natively, “We don’t know God, but of course we could always Google for him/her.” Either way, the name looms like some rival cosmic force. The kind of ambition it expresses is not new in human history—to know everything that exists. They’ve all partaken of that fantasy, from medieval encyclopaedias, to the part-comic Book of Lists, to the inexhaustible catalogues of the US Library of Congress. Or should that be Borges’s Library of Babel, which contained: “Everything: the minutely detailed history of the future…all that is given to express, in all languages.”

But it’s Google that has come closest to fulfilling that frightening mandate. Forget God, you can Google yourself. It knows what you did last summer, where you plan to eat tonight, where you’re reading this sentence right now. You have practically outsourced your memory to the machine, also the “detailed history of your future”. Imagine, then, a life without Google! Would bridges collapse and the skies come crashing down? For those who grew up in the past two decades, such a life would be well-nigh inconceivable. But for even those from the other side of the millennial wedge in time, it’s becoming a little hard to remember how we got around with life those days. What did we do, for instance, when there was a fork in the road somewhere out in the country? Duh…. Or needed to find the nearest Decathlon…oh wait, there was no Decathlon either. No FitBit. Before Google, there was only Govinda.

“Each time I am in India, I notice how quickly it changes. India will keep helping us build ­products for everyone.”
Sundar Pichai CEO, Google

Okay, back to the thought experiment…you’re the protagonist of your own work of fiction. It’s ­titled ‘Ungoogled’… You are suddenly bereft of the whole enchilada, that alarming array of products from the Page-Brin stable. Things you take for granted. That calm, simple white screen with minimalist design where you track everything from the ­progress of the monsoon, to the cricket score, to the reverse repo rate (if you do swing that way), to your own current location! So out goes Google Search, which used to be a revolution before algo-rigging and AdSense and all that. Out goes Gmail. Phew! There goes your Android phone! And all the little apps you keep downloading on Google Play. Out goes YouTube! And no Google Maps! Going back to 1995 is ­alm­ost as radical as time-travelling to 1595.

The rest of the frills—Google Duo, Google Pay, the voice search, Google Assistant—are yet to become indispensable, while making serious incursions on our time and mindspace. Those who type in Indian languages, for ­instance, do not type anymore—the keyboards were always a mess. Now they speak to the phone, and Google’s speech recognition software does the hard yards.

Those who type in Indian languages do not type ­anymore. They speak to the phone, and Google does the hard yards.

So how does day one go? You wake up and glance at your mobile…what, no notifications! It’s a dumbphone. An hour late to office, because no Yankee girl told you via satellite that Hosur Road was chock-a-block. Your boss calls you and says something that sounds “exasperating farrago of distortions….” You can’t even Google that! There’s a short news piece online on how Virat Kohli gestured to Steve Smith, another on Piggy Chops and Nick Jonas’s beach photographs. But, alas, no video, no photo…. Fingers itch for a search engine. It’s 1 pm, lunch time. Zomato’s delivery boy gets lost…no Maps, remember?

Of course, Google Search was a godsend. Aditi Verma, a 27-year-old who works in Bank of America, says it’s her first-hand info-guide and she doesn’t know any other search engine. “There are many things you don’t want to talk to your parents about, or family, friends or colleagues. Google fills in. Studies, jobs, relationships, ­puberty, sex…Google takes you wherever you want. It doesn’t ask you questions nor judges you like people.” What would she do if Google vanishes one day? Aditi laughs: “Good idea, Google should experiment. One day it should switch off its products all over the world, let’s see what chaos follows.” She would just binge on food and TV that day. “What a relief it will be!”

But the idea seems scary to Indian language journalists—since most of them have abandoned typing, Indian journalism now leans heavily on Google. Its penetration in India is so high that voice searches in Hindi grew 400 per cent in 2018, while the growth overall in the world was just 270 per cent. “It was torture to type Hindi,” says Arvind Singh, who works with Hindi daily Hindustan. “The font system was difficult to learn, and many symbols like aadha la, aadha pa were not available.” Naturally, he has migrated to voice-typing his stories and doesn’t want to migrate back. It all seems like some Ali Baba Chaalis Chor fantasy to him right now, where no hands are required to work. Life without Google? “A vacation to Switzerland would be best,” he chuckles. “As of now, work and Google are synonyms.”

Google voice searches in Hindi grew 400 per cent in 2018, while overall growth across the world was 270 per cent.

lchiki Gboard? Yes, unbeknownst to English users, Google’s Indian-language space is exploding like a supernova. Gboard, the Google keyboard, can handle 50 Indian ­languages and voice-input supports 10 of them. Map voice navigation comes in seven: Hindi, Bengali, Tamil, Kannada, Telugu, Malayalam and Gujarati. That’s millions and millions of people. And Google Assistant works in 10 ­languages. A majority of India’s 400 million ­active internet users work in Indian languages, not English. No wonder Caesar Sen Gupta, vice president, Google’s Next Billion Users ­initiative, says: “We have launched a number of India-first products. By building for India first, we build for the future—creating apps that work great for everyone, everywhere. Maps Offline and Two-Wheeler Mode are great examples—products built for India, but now being used elsewhere in the world.”

So no getting away from Google, it seems. Except in your fiction…well, not even in fiction,  come to think of it!

Gboard is nothing...think Gliterature. Last year, the erudite radio presenter HrishiK was interviewing Meghna Pant, an award-­winning author who had recently published How to Get Published in India. How could a ­person like her, who had grown up in South Mumbai, write about people in villages and small-towns in her short stories? Meghna took a deep breath, paused to survey the 100-odd ­people in the ­audience, and said cryptically, “Imagination.” Yes, of course, a writer needs imagination. Well, very few will admit it, but a writer could also use some help from Google.

While a writer’s mental mapping of unknown worlds proceeds with a bit of Googling, the humbler Ola driver would be totally lost in a new city. “Our company uses Google Maps for most of our 110 cities,” says an Ola executive, on condition of anonymity. “No Google Maps means no company. Maps of India has no such presence.” A whole economy is flourishing on Google Maps and, if it were to disappear one day, many businesses would come to standstill. “Even network hiccups cause us trouble, but imagine if the main app disappears—we would have to pack our bags and go back home,” he adds. Ditto for Zomato, which tracks orders on Google Maps. Again, the executive didn’t wish to be ­identified. Neither company offered a formal response.

For all this, interestingly, no one remembers when they started using Google in India! Even Google is quite clueless about its usage in India—although, technically, Google set up its first office here in December 2004. “Developing maps was fun in the 1980s-90s,” says Swati Mitra, executive publisher of Eicher Goodearth Private Limited, who formerly also headed Eicher’s map division. “We would travel ­hundreds of kilometres and study hundreds of maps to come out with city guides and maps…. Now one app gives you all that.” Even a decade ago, maps and travel guides were a must-have. But Swati confesses she herself has switched to Google Maps; Eicher’s map division was closed around seven years ago.

For the older ones, Google affords a kind of creative luxury, replacing what used to be donkey work in the 1970s-80s.

IIFE before Google? Well, it’s not just those in their teens and early ’20s who are hooked to Google—for the older ones, it affords a kind of creative luxury, replacing what used to be donkey work back in 1970s-80s. For an IPS officer with the CBI, who aptly prefers to stay undercover, life before Google recalls the days of the fictional Byomkesh Bakshi, Karamchand et al. All that crackling genius and logical riddle-solving needed a lot of grunt work alongside…“dialling over 100 numbers from the printed BSNL directory, poring over paper cuttings in libraries, tracking down khabris (informers). Today, Google has become our khabri,” he laughs. He doesn’t remember when exactly he started using Google—he recalls those old dial-up connections, where “two telephone symbols got connected through a dotted line, with a weird sound”, and transiting through Hotmail, Yahoo, AoL, MSN, before settling down with Gmail. But the paper trails, the FIRs, filthy rooms filled with dust, rats…how nostalgic can you be about real spider webs!

Sebi Joseph, CEO, Otis India, recalls when “newspaper ads, word of mouth and the employ­ment exchange” were how you landed jobs. “I ­remember an ad appeared in The Hindu about vacancies in Otis back in 1987. I had cut that out, typed out my CV and application, and posted them.” Sounds like a period movie already? Employment News was on Fridays, to-let ads helped you find a home…Sebi, who loves to keep himself updated with technology, sometimes gets nostalgic and doesn’t mind going back to a Google-less era. Did it have an inner coherence of some sort, a world that was the way it should be…only partly known, only partly knowable, inherently mysterious? Is that why someone quipped, laconically, “We don’t know God, but Google.”

Except, Nietzsche isn’t around to ­proclaim “Google is dead” yet. Out in the greens of the JNU campus, some of the old ways of voyaging through the world survive. “When it comes to JNU, it’s still the lib­rary,” says head librarian Manorama Tripathi. “Be it the 1980s or now, the library is ­always full.” Googling isn’t any sort of replacement for serious research; it can at best be a ­facilitator. Her 50-year-old, nine-storey library works like Google, open 24x7. Free WiFi via Google across 400+ railway stations, the poor Indian getting rich on data, and being turned into data themselves, could be some kind of ­technocratic uto…heck, what’s that word?