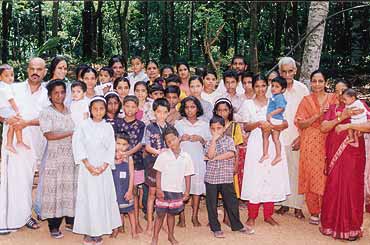 outlookindia.com
-0001-11-30T00:00:00+0553
Some mothers do have them, yet others need to be loved and cared for more than others. The cradles at the Mother and Child Foundation in Thodupuzha are for babies of unwed mothers, pregnant, deserted or abused wives or cheated women—the victimised social outcasts who have no other place to have their babies.

The foundation is the dream project of Thomas Myladoor, a doctor-turned-hotelier who owns an Indian restaurant, ‘Il Guru’, in Rome. As Thomas remembers, "I was on holiday at my home in Thodupuzha when I visited an orphanage to which I used to donate. To my horror, I found a hydrocephalic child there, abandoned by the mother. He was so emaciated that only his head was visible. His mother had come there in the last month of her pregnancy, after every other orphanage had rejected her. The small orphanage had 23 children and five women then but she was allowed to stay and deliver the child. I was so moved that I adopted and took him to Rome. Now he is seven and there is no trace of the bulge in his head. The incident made me realise the plight of such women and that of abandoned children. That’s when I decided to set up the Mother and Child Foundation, called so because it serves the mother as well as the child."

Babies are in great demand for adoption and stories abound of newborns stolen by women who later sell them. The foundation also helps counter this social evil. Many women wander in to salvage the burden in their wombs. Like pregnant Sajeena, 19, from Vaikam, who used to hawk soap powder from door to door. She suffers from fainting spells. "I went to the neighbour’s house once to watch TV. When the elders left for work, I was still watching TV. But when I fainted, the man in the house raped me and left. When I became pregnant, I couldn’t stay in my house and so I came here," says Sajeena. She plans to abandon the child and go back to work. Another woman, Omana, came because she could no longer endure the torture of a sadistic husband. "He used to cut my flesh with a blade and apply chilly powder on the wounds, revelling in my agony," she recalls with a suppressed shudder. She was brought in by her relatives.

Also here are 40 destitute boys and girls abandoned by poor parents. "We send them to school so that they are ‘mainstreamed’," says Prof Kochuthresia, a committee member. Walking into a room with cloth cradles hanging all around, one finds tiny cherub faces with button eyes, turning on their side to gaze at you. Or crying for attention. The house itself was donated by an old couple, Augustine, 86, and his wife Elizabeth. "We like having the children around us," he says. Adds Malini Menon, another committee member, "We try to find jobs for mothers so they can stay on and look after their kids, instead of abandoning them." ‘Distant’ adoptions, where a patron pays for a child’s upkeep, are also offered to those interested.

The foundation also has a home for the mentally ill attached, again the outcome of the efforts of a single man, Tomy Odakkal. "A lunatic wandered into my house and I began looking after him. It appears to have had a ripple effect, for more and more mentally ill persons wandered in. Irate neighbours accused me of "eroding the quality" of the neighbourhood and the real estate value but I persisted. I even gave my share of the family property for this purpose." There are 175 men in the makeshift home now, all in various stages of insanity, both violent and hallucinatory. Called Divya Rakshalayam, it is home to men who inhabit a different world. Curled in foetal shapes or just prostrate, many are mere physical presences. "Even rich families bring mentally ill members and abandon them here," Tomy says. It’s now acquired legitimacy with even the police bringing wandering lunatics to the home. The inmates are given psychiatric care, shaved, bathed and fed everyday by volunteer attendants.

The building to house the children is yet to take shape, the funds-starved project sustained only by the generosity of Thomas’ Italian friends. When it comes up, the plan is to accommodate 200 children and 50 women. "Noi abbiamo fatto le fondamenta. Aiutaci ad arrivare al tetto (We have laid the foundation, now help us complete the roof)," says the home’s pamphlet. For further details, contact: Director, Mother and Child Foundation, Mylacombu P.O, Pynkulam, Thodupuzha, Idukki district, Kerala.