Society So Who Caught The Whale?

So Who Caught The Whale?

High adventure and skulduggery on the 'aluminium trail' 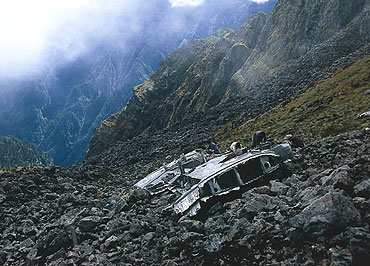 When I first heard about CNAC 58, a Dakota that crashed in the Eastern Himalayas in 1943, my head was swirling with dreams of picturesque adventure. Still on the cusp of 40, I nursed fantasies of striding ruggedly through a storyboard that was part Lost Horizon, part Tintin in Tibet. By the time I actually huffed my way up to the wreck on a remote mountainside in Arunachal Pradesh in October 2005, my sprightly companions were calling me Captain Haddock.

More like Captain Ahab! In the months after I limped home, the aeroplane remained a consuming obsession. The problem was that although we found two engines, a tail, a wing and even newspapers from 1943, we didn't find anything that said 'CNAC 58'. Two months later, after reading my account of the trip in Outlook, and asking me for directions, an American adventurer named Clayton Kuhles went up to the same site and came back maintaining that this wasn't CNAC 58 but some other aircraft entirely.