So What If You Aren’t Shahrukh, You Can Still Be An Ass 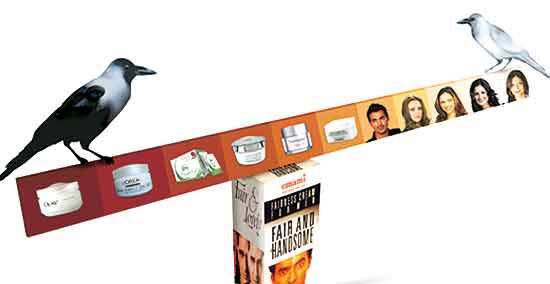 Illustration by Ashish Bagchi
Shefalee Vasudev February 08, 2010 00:00 IST So What If You Aren’t Shahrukh, You Can Still Be An Ass

So how do people who become three shades lighter with the help of whitening creams feel about life? Do they become more successful, happier, non-stressed, more capable of handling tension or tragedy? Do they laugh more, earn more or have better sex? “Kaisa lag raha hai?”—that silly, stock TV reporter’s question—might actually yield far-reaching insights if asked of people who’ve risked mercury poisoning, skin-thinning, dermatological allergies and threats to the nervous system (all possible side-effects, researchers say, of the use of fairness creams) in the pursuit of fairness.

No survey has ever been done anywhere in the world to discover what fairness in four weeks achieves, apart from itself—lightness of being, emotional fulfilment, stable and healthy relationships or professional success? The randomly associated benefits of whitening creams dramatised in fairness lotion commercials—a good groom, a better job, confidence, beauty awards, mind and body rejuvenation—are mere projections.

In India, after arguing ourselves to the point of exhaustion about the unfairness of selling ‘fairness’ in the context of marriage, dowry, divorce, designation and dignity, we seem to have discarded fairness creams as an issue, perhaps seeing them as a lost cause. What else explains the fact that barely an eyebrow was lifted when new studies surfaced earlier this month from the US, with dermatologists reporting that some fairness lotions can not only contain steroids but mercury as well, which could lead to internal poisoning of the nervous system?

Not all whitening products contain hydroquinone, the banned chemical. But they do have metal derivatives and synthetic elements with potential risks.

Should we not worry about the fact that despite years of well-researched, scientific surveys on the harmful effects and allergic repercussions of fairness creams, the market for fairness products is growing and growing in India? Estimated at Rs 2,500 crore in 2008, with an annual growth rate of 20-25 per cent annually, the fairness segment is today at its belligerent best, inflating rapidly and gobbling 40 per cent of total sales of skincare items. Mass brands like Fair & Lovely, the matriarch in this line, is now in a fierce competitive dance with rival products from Lakme, Ponds, Garnier and Nivea, some of whom who have expanded the frontiers of the ‘fairness’ empire by launching fairness creams for men. Purveyors of ‘natural’, ‘herbal’ and ‘ayurvedic’ products, such as Himalaya and Shahnaz Husain, are not to be left behind. Global cosmetic giants, all aspiring for a lucrative share of India’s ‘fairness’ cake, seem to know exactly where to squeeze. Estee Lauder, for instance, came well-armed for India, where every bride tells her make-up artiste to make her look at least two shades lighter for her big night, with not just a whitening cream, but an Extra Whitening Cream. Not to be outdone, Chanel has Precision White Essentiel and Dior Prestige White.

Brands are about price and marketing hierarchies, so depending on your  budget and the intensity of your craze for fairness, you will find a product that suits your whims (or your mother-in-law’s, or your boyfriend’s) at between Rs 25 and Rs 7,500-plus for a 50 ml bottle. The labels have reinvented themselves with a vibrant new vocabulary. Fairness being overused and now politically incorrect, the consumer these days chooses among lightening, brightening, whitening, anti-pigmentation, anti-dullness, illuminating, clearing, freshening.

No, there is no dearth of choice, but there is clearly a dearth of judgement. Why do modern Indian women, now ostensibly independent, highly educated, well-travelled, broad-minded and aware, run after creams that may contain unsafe ingredients? Not all such creams contain hydroquinone, a synthetic skin-whitening ingredient banned in many countries, and mercury, that could lead to nervous system and endocrinal damage, but every whitening product does contain some synthetic elements and metal derivatives, which have potential risks.

Why do Bollywood stars, who claim to be global-local ambassadors of new India, agree to become brand ambassadors of products without being absolutely sure they are hundred per cent safe? Katrina Kaif, who is naturally fair, sells Olay’s Natural White. Preity Zinta, another fair lady, was not so long back the face of Fem’s Herbal Bleach. “It is not a bleach, it is a breakthrough,” said the ad. Wow! Sonam Kapoor sells L’Oreal’s White Perfect and Deepika Padukone sells Neutrogena’s Fine Fairness range. John Abraham dimples and offers you a shade card as he tries to convince you to buy Garnier’s Men’s fairness cream.

What’s especially worrying is that terms like ayurveda, natural, herbal, and adjectives like long-lasting, healthy, nourishing and enriching are used in conjunction with fairness products. (‘Herbal bleach’ sounds like such a slap to ayurveda!) If some of us can file PILs against reality TV shows that allegedly “debase” our thoughts, why not a PIL against the inappropriate labelling of fairness creams? If tobacco companies are liable to say smoking is injurious to health, why shouldn’t fairness creams be obliged to do the same on the crimp of the product? Why not at least definitive certification from laboratories that declares their ingredients safe? Shouldn’t the Central Drugs Standard Control Organisation (CDSCO), under the ministry of health, be legally empowered to recall harmful products for clinical testing in case of a complaint?

Fairness creams do make you temporarily lighter skinned. But for how long? How fair we are is not only genetically determined but is also dependent on factors like pollution, nutrition and everyday exposure to UV rays. Also, medication for common ailments like diabetes, hypertension and asthma may cause your skin to darken a bit. No whitening cream can help anyone battle clinically related skin-darkening. While using fairness products, the skin has to be constantly protected from sun damage and, as any good doctor will tell you, as soon you stop using these potions, the effects reverse. Which means, you are signing up for a lifetime use of potentially risky products to stay fair. Does your insurance policy cover expenses to treat dermatological allergies or irreversible damage to the body due to extensive use of whitening products? Or do you plan to give them up after retirement, or perhaps after your daughter is married? It’s not a feminist, class or race debate anymore—at least not exclusively. It’s a health and safety issue. Perhaps it is time to be fair to ourselves.