The IPL, as we knew it, had a meteoric life. The format it was created in required living dangerously. 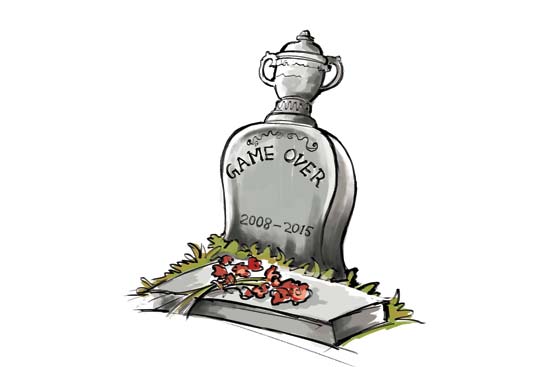 There are many who will mourn its passing, including, most gleefully and digitally, its creator, currently broadcasting a ball-by-ball commentary from London. Little Modi, so as not to be confused with Big Modi, could well be tweeting Woody Allen’s famous quote: “I’m not afraid of death. I just don’t want to be there when it happens.” He wasn’t and it happened, courtesy a panel of third umpires normally seen in black coats. Appropriate, since it was a black day for many related to the deceased—players, sponsors, television channels, administrators, accountants, coaches, sons-in-law, owners and co-owners, domestic airlines, five-star hotels, DJs and assorted hangers-on, not to mention millions deprived of diversions like cheerleaders and celebrities and, of course, cricket.

The end was sudden and surprising, since the deceased seemed in good health despite some minor setbacks. It had appeared that physicians and spin doctors had fixed potential ailments like spot-fixing, sweat equity and Lalitgate and were betting on a long innings, but clearly there were hidden complications. In that sense, the IPL, as we knew it, had a meteoric life. The format it was created in required living dangerously, for players and administrators equally. Seven years is cricket history’s equivalent of a T20 match, but entirely coincidental with Shakespeare’s seven ages of man. Like his mewling infant, it had started to turn into a spoilt brat. Initial post-mortem reports suggest that the IPL’s death was due to problems with two internal organs out of the eight, both vital. Without Royals and Kings, survival was a toss of the coin. Royal and King was aptly descriptive. The IPL lived a life of extravagance and self-indulgence in full public glare. King-sized, as one owner branded himself. There was no better depiction of band baaja baraat than an IPL lifestyle.

He dressed in flamboyant clothes, threw parties at the drop of a catch, travelled to exotic destinations like South Africa, his every move was accompanied with music and cheered by blondes in short skirts and painted faces. Supporters, also with painted faces, turned up in huge numbers while giant screens flashed advertisements, hyperbole and occasionally, the score. Every season started with cricketers being auctioned for eye-popping amounts, their worth measured by a combination of statistics and sex appeal. For all those reasons, the IPL will be missed, but most of all, by the commentators, former players earning more in one season than their entire careers, accompanied by eye candy.

The IPL was nothing if not democratic—opposition politicians found common ground, or grounds, moviestars got to slap policemen, Harbhajan got to slap Sreesanth, a minister had to resign over sweat equity, a commissioner was decommissioned while Srini cemented his reign and now refuses to budge like a fevicol ad. Most creditably, never have so many retirees found gainful employment and been gifted a second innings. Looking back, it was a hugely pro­fitable marriage of commerce and cricket. Last heard, the IPL was valued at $7.2 billion, the same as Flipkart. Now that its cart has flipped, the valuation may need some revising.

We are seemingly in the death overs, and the fate of many awaits the dreaded raised finger. There’s Dhoni and Raina, Watson and McCullum, Dravid and Dwayne, Samson and Southee, Kundra and Meiyappan, and then the support staff, from masseurs to minders, transporters and terminators, brand ambassadors and band masters and oddballs like Vindoo Dara Singh. If termination comes, we shall sorely miss Shilpa Shetty and her Colgate smile. And, if there is to be a funeral, there are only two people who can deliver the eulogy—Gavaskar and Ravi Shastri, for their remembrance of things past and the blessings that the IPL showered on so many people. It was a good life, a full life, and, in good Hindu tradition, there could well be an afterlife. Some call it Moksha. In cricket, it’s called the Doosra.

The reports of the IPL’s death could well be premature. Organ transplants are one way to revive a dying patient, and a full detox and Kejriwal-style colonic could well see a revival. There is too much at stake to allow the IPL’s ashes to be thrown to the winds just yet. After all, the other Ashes has survived since 1882. The IPL is made up of pampered professionals and politicians equally well versed in the art of making a comeback. So we can hold off those professional mourners and substitute the requiem for rebirth. Like Jesus Christ, our superstars can be resurrected and emerge in different colours, owing allegiance to a different master. The Bhopal Bangers? The Pune Pulverisers? Or even the Srini Slayers! Much like jugaad, reincarnation is a unique Indian phenomenon, much like the IPL was. RIP, which could also mean Rest in Pieces.

One Half, Fully Empty?