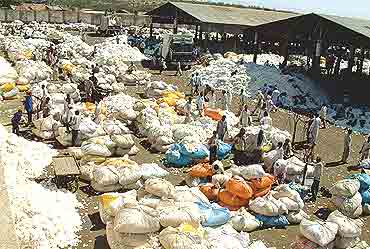 The drama began after the GEAC gave monopoly rights to Monsanto, an American MNC, and its Indian partner, the Maharashtra Hybrid Seeds Corporation (Mahyco), to sell their Bollgard cotton seeds. But by then, an illegal variant, Navbharat 151, grown over 11,000 acres by Ahmedabad's Navbharat Seeds, was already selling in the market. In October 2001, the GEAC asked the state government to destroy Rs 150-crore worth of Navbharat cotton crop. But nothing happened. Except that Navbharat Seeds' owner, Dinkar B. Desai, went into hiding in the wake of the controversy.

But the state's farmers, who account for 20-30 per cent of India's cotton production, were in a quandary. Since Bollgard did not perform consistently, Navbharat 151 was banned, and non-hybrid seeds had high associated costs, they found other ways to use GM seeds. "What they (the breeders) did was to procure the parental lines of Navbharat's seeds and cross them with local variants to give birth to newer versions. In the last year or so, at least a dozen hybrid varieties have hit the market without any research or approvals or trials," says Bharat Chitalia, a researcher and a farmer in Dhoraji, Rajkot.