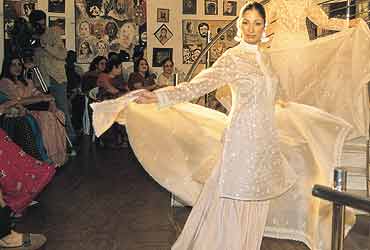 outlookindia.com
-0001-11-30T00:00:00+05:53
It's a pleasant October night and Delhi's FTV Bar and Lounge is brimful. The men seem uniformly accessorised—hair products plus accents gleaned assiduously from the nearest multiplex. The women show more variety—as long as it was black and designer. Everyone's jostling for space. Suddenly the lights dim, the music cranks up and everyone is craning their necks to catch a glimpse of the models that have materialised from a corner. As svelte figures snake their way through the crowds, guests can watch the outfits and models from a distance of just a few inches. Whether this helps them appreciate the designs better is debatable, though this is clearly a crowd that adores designer labels. What seems to be increasingly certain is that designers are throwing away their five-star fixation for smaller venues and more selective crowds. Most important, the change also means they are working on smaller budgets for organising fashion shows. Small is the new big for the Indian fashion industry. 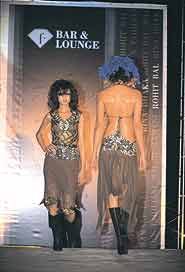 Roshni Jaiswal of the FTV Bar and Lounge says since bar opened last September, she has had some 15-odd shows, "and these are just designer shows, I'm not even counting the shows associated with product/service launches," she says. Compare this to Taj Palace, a venue popular with the capital's fashion fraternity. It has had an average of four shows in the last two years. And Taj Mumbai? Just two shows since January this year.

Why this decline? One reason seems to be the popularity of the India Fashion Week (IFW) that began five years ago. Designers and fashion experts admit that not only has the number of shows come down, the venue and method has also changed. The opulence, the drama, the larger-than-life imagery is giving way to no-frills-attached shows where the focus is on the clothes and the buyer, not the socialites who attend it.

Perhaps the influx of pret-a-porter (ready-to-wear) and diffusion lines in the Indian markets has fuelled this trend.

When Rohit Khosla, among the first to organise fashion shows in India more than a decade back, started off, the collections would always be couture (hi-end fashion). But in the Indian context, couture always meant trousseau. Later, with the emergence of page-three, fashion shows became a gimmick and the focus on clothes was lost. This continued till IFW when pret started getting national visibility. The Fashion Design Council of India began educating the press about pret. Internationally too, pret was gaining momentum and foreign buyers who flocked to the IFW expected the same from Indian designers. As a result, over the last five years, a number of leading designers launched their pret lines like Label (Ritu Kumar), Balance (Rohit Bal), Le Spice (Suneet Varma), Inde Pret (Raghavendra Rathore), Kimono (Kiran Uttam Ghosh) and more.

Now we've reached a stage where hi-end fashion or haute couture continues but has definitely taken a backseat. "This phase was inevitable in the evolution of fashion in this country," says designer Ranna Gill who believes that like elsewhere, the future of Indian fashion is pret. "Now, when I organise my show at my own store, I prefer to call people who matter—buyers, journalists, clients, rather than any and everyone just to fill the seats in a huge five-star hall," says Gill.

IFW has also been instrumental in setting this trend. The fashion week provides designers a chance to present their creations before buyers from all over the world. Hence, they prefer to invest the maximum resources and energy on the IFW show which yields in maximum orders. For the rest of the year, designers are content doing smaller shows. As has been observed recently, designers are also channelling into other areas like wedding planning and hosting nightclub launches.Recently, Rohit Bal did the launch party for Decibel and Tarun Tahiliani did it for Elevate—both nightclubs in Delhi. According to Pradeep Hirani of Kimaya (a fashion store), these are ways to consolidate their brands. "It's just like Amitabh Bachchan endorsing Dabur," says Hirani who links this need for wider business operation base to the eventual entry of foreign direct investment in the retail market in India. "Once that happens, Armani, Cavalli, Prada, Fendi will be selling from malls and I foresee that in the absence of proper infrastructure to deal with competition, 50-60 per cent of Indian designers will just disappear from the scene," says Hirani.

This eventuality is forcing designers to rethink their business strategy. They are realising the economic futility of having grand shows. A large-scale show in a five-star may cost anything between Rs 12-15 lakh whereas doing it at their own store or at a nightclub may cost about Rs 1-2 lakh. Considering corporate infrastructure to support fashion in India is still not quite obliging, spending less on shows makes more sense. While there are a few regular sponsors like the liquor companies and Swarovski that is associated with high-end designers like J.J. Valaya, Tarun Tahiliani, Manish Arora, there is always a pressing need for sponsors. For instance, designers Nikhil-Shantanu and Sabyasachi showcased their collection at Taj Mumbai on December 9, a show sponsored by abn amro. Without sponsors it is difficult to handle the costs of a five-star venue. Says former fdci chairman Vinod Kaul, "Often designers are running for a sponsor till the last minute before a show." Though he adds that corporate investment in fashion is growing.

The last couple of years have seen a host of designers opening up their own stores and holding in-house shows. "This was not the case earlier and we still were dependent on hotels which would often give us their space on discounted prices," recalls designer Raghavendra Rathore. Hirani goes on to say that a lot of five-star hotels used to provide space to designers free of cost. Nightclubs and lounge bars have now taken their place. According to sources, FTV Bar and Olive provide space to designers free of cost.

Designers also have their showings at their own stores or at well-known fashion stores and art galleries. Tahiliani recently held his fall-winter collection at his Defence Colony store in Delhi. In Mumbai, upcoming designer Surili Goel had a preview of her collection at Ensemble on December 14. Rohit Bal also launched his eveningwear collection at Delhi's Carma on December 3 and designer duo Manju and Bobby Grover unveiled their fall-winter 2005 collection at their own studio. While in Delhi, Olive and the F Bar happen to be the the fashion hotspots, in Mumbai, Enigma, Le Vie and Seven are some of the current favourites.

Fashion trends forecaster Rajiv Goyal finds this entire trend healthy and in tandem with the international scene. "Designers abroad have 'trunk' shows where they do a small show in a departmental store with a few models. Their clients are present and the designers explain the concept. Post-show clients also get to try some of the creations," says Goyal.

Trunk shows may still be a far cry, but it's encouraging to see the Indian designer fast realising the importance of business and shedding his/her page-three baggage. The train is on track, it will hopefully reach its intended destination—a globally visible Brand India—soon.