In the interiors of Tamil Nadu, these freak swamis are a phenomenon in themselves 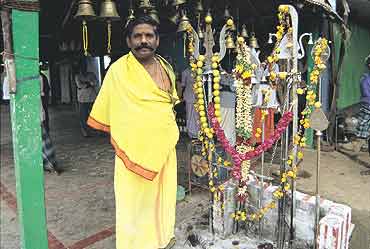 The long-locked man is just about five feet tall and an undernourished 40 kg. Clad in a yellow veshti, he lives in the Adi Dravidar (Dalit) Colony, where the roofs of most of the 27 government-built one-room houses have collapsed. Seated on a gunnysack, Arumugam pedals his sewing machine, stitching a green blouse. It’s early on a Friday, and before the clients turn up, he asks us to fetch him two 180 ml bottles of Cosmopolitan whiskey, two plastic glasses, two water sachets, a packet of savoury ‘mixture’, some pickle and five idlis. Of course, the ‘prasadam’ will be of even greater value if you add ganja, pan parag and Ganesh beedi to the list. The man at the state-owned liquor shop 2 km away knows at once: Is all of this for the Snot Swami? he asks.

After a turmeric-scrub bath in a lotus-strewn pond, Arumugam drapes himself in a sari, sits below a tree near the Karuppusamy temple, and elevates himself to a higher plane of consciousness by gulping 360 ml of rotgut whiskey in 40 minutes. "Other swamis hide what they drink, I don’t," he says.