Have the honourable grandees of state decided to impersonate George W. Bush's vocabulary? 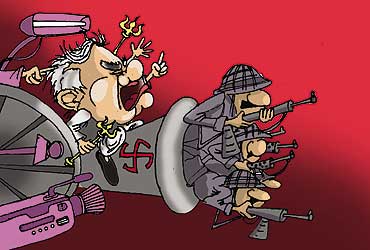 outlookindia.com
-0001-11-30T00:00:00+0553
"Mooh tod jawaab denge!," thunders the defence minister. "Aar paar ki ladai hogi!," vows the prime minister. "Hot pursuit!," declares the home minister. Carl von Clausewitz would cringe. Clausewitz’s famous work, On War, is regarded as one of the best books on warfare and contains the famous line—"War is merely the continuation of policy". War is supposed to be reasoned policy but our policymakers still sound as if they are scrapping on the streets or screaming in a fish market! Have the honourable grandees of state decided to impersonate George W. Bush’s vocabulary? Will they soon canter down Raj Path brandishing trishuls yelling "we’re gonna smoke ’em out?" It looks like it.

War rhetoric is so astoundingly blunt now that even senior statesmen look like they are impersonating the chief protagonists of mafia movie Satya.

But whose sons and daughters will fight this war? Who will die so that we may feel happy about our patriotism? Not the children of the top echelons of bureaucracy certainly. Oh, no. Not them. They have skilfully de-nationalised themselves. They are climbing to the top of wealthy international institutions and barely give a toss about India. They’ll follow the war on the internet and so the bureaucrats and their families will be safe. Who else will fight the war? Not the sons and daughters of any ministers or politicians. Nope. Not them either. They’re mostly millionaire industrialists with hefty turnovers, far too busy to take a trip to Poonch. The politicians will all be safe.

Who else will fight? Not the NRIS. Their ‘nationalism’ is strictly long distance. They crave a phantasmagoric New India where you must look like John Travolta but constantly sing the Gayatri mantra. They will insist on a ‘final confrontation’ with Pakistan but only from their distant temples and gurudwaras. So they’re safe too.

Who else? Not us metropolitan chatterers. Oh, not us. Never us. We’ll just watch it all on glossy television with an orchestra playing in the background and clap like mad when intrepid TV reporters return with bulging curriculum vitaes. We’ll cheer when macho tele-analysts say sexy things like ‘big guns’ and ‘21 corps’.

Only down a dirt track in a forgotten qasba, a little boy will stare dead-eyed at his father’s photograph and wait until he’s old enough to follow him to the blood-stained mountains.