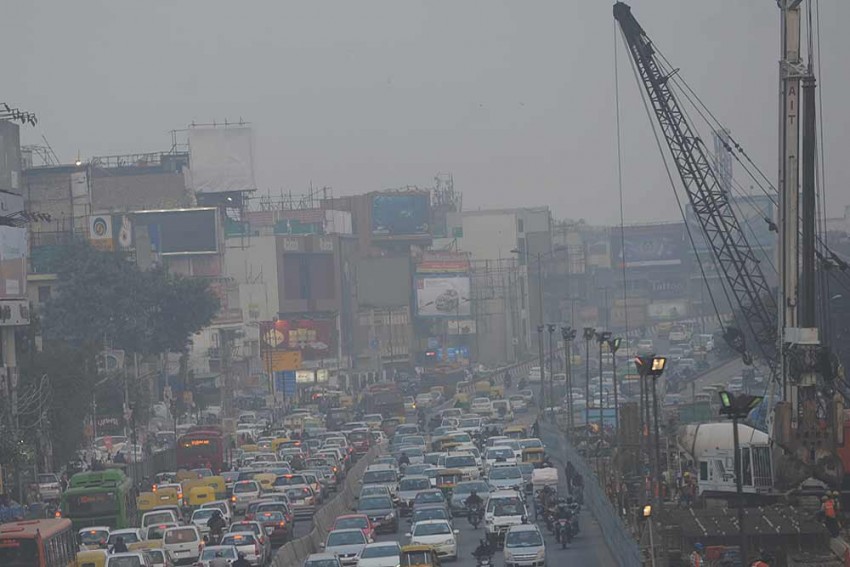 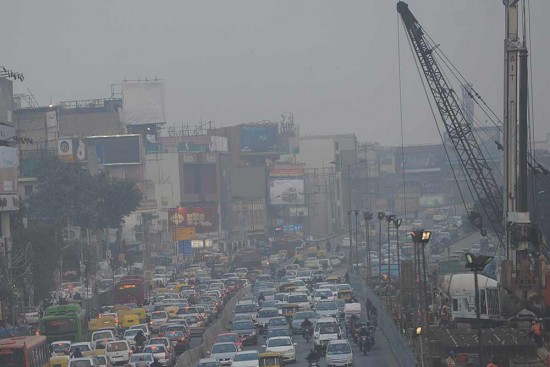 It’s In The Air

Why is Delhi losing the battle against pollution?

Delhi’s worsening levels of pollution couldn’t possibly have a more high-profile mascot than its chief minister Arvind Kejriwal. Often seen with a muffler wrapped around his head and heard tied up in coughing fits, the chief minister suffers from acute bronchitis, a condition that for most sufferers always worsens in Delhi’s winter, when calmer weather systems prevent diffusion and hold down particulate matter in the lower layers. A night out during the dharna in January even sent him coughing all the way to hospital the next day. Is Delhi’s air really that hostile?

Yes, it turns out. And it was this winter that the capital’s alarming pollution levels crept back into the news again, especially after the release of Yale University’s Environmental Perfor­mance Index for 2014, which ranked India as one of the most polluted countries. What shocked many was that, on the criterion of the population’s average exposure to PM2.5 (particulate matter in the air that is 2.5 microns or less), Yale ranked India 177th among the 178 countries surveyed. In terms of a  slightly different criterion called PM2.5 exceedance—that is, the average percentage of the population exposed to PM2.5 levels of 10, 15, 25 and 35 micrograms per cubic metre, the last three levels being who’s interim health targets—we fared only marginally better, at rank 174. China’s ranking for the two criteria was 178 and 174 respectively. Being clubbed with China, widely portrayed as one of the most polluted countries, was enough to send many from the government into spiels of denials and defence.

Poor public transport, and hence the proliferation of private vehicles, is one of the chief problems of Delhi.

What’s indisputable, though, is that Indians living in its bigger cities and towns are breathing in a lot they shouldn’t be and that India’s capital, and indeed many of its other cities, have a growing pollution problem. Using data gathered by the Delhi Pollution Control Committee for 123 days between October 1 and January 31, the Delhi-based Centre for Science and Environ­ment (CSE), a campaigner for a cleaner environment, rec­ently said it was only on three days that PM2.5 levels were lower than the 60 mic­­ro­grams per cubic metre limit. On 41 days (33 per cent), it was higher than five times the limit, and on 17 days (14 per cent) it was even more than 350 micrograms per cubic metre. If American or Chinese air quality classification standards were applied, says Anumita Roy­chowdhury, head of CSE’s air pollution control team, the city has been through a “pollution emergency” this winter.

In fact, her colleague and CSE director general Sunita Narain even risks saying that gains that arose from CNG usage have been frittered away. “We can officially say we have lost,” she says, referring to the campaign around 2000 to popularise the use of CNG. One of the chief contributors to the problem is the dramatic rise in the number of cars—around 1,500 are added daily in the city—and 40 per cent of Delhi’s cars run on diesel, whose emissions are more harmful, even carcinogenic. It’s a depressing turnaround for a city that had improved its pollution figures over the last decade. “We aren’t taking steps to control pollution in Delhi at the scale and speed we should,” says Narain.

China has banned the sale of diesel cars in Beijing and capped the number of cars to be sold annually in the capital at 1,50,000. Post-2008, India’s anti-pollution measures have been tepid. Some  measures being widely mentioned as crucial to prevent a downslide include moving to higher emission standards (such as Euro V or VI levels), keeping the price of CNG—a cleaner fuel—much lower than diesel, taxing diesel cars more and disincentivising car usage with, say, higher parking rates and steeper fines for parking violations.

Public transport needs to be improved too: despite Delhi Metro’s rapid strides, the advantages are lost owing to poor last-mile connectivity, and the city needs far more buses than it has. As far back as 2001, the Supreme Court had mandated around 11,000 buses for the city, which still trundles on with fewer than 6,000. Interconnectivity with neighbouring suburbs such as Noida and Gurgaon is also severely limited.

Pollution checks of vehicles are also a mere formality, with many avoiding it altogether or paying their way out when pulled up by cops. Testing units that certify vehicles often have poor equipment. “At some level, it’s pretty meaningless,” says Prashant Rajankar, a senior programme officer with Toxics Link.

Another ignored aspect of the pollution problem has to do with inadequate and unreliable data being generated across the country—for instance, Gur­gaon, a bustling, growing suburb, has only one monitoring station and Noida has none—and the absence of clear air quality standards. Also lacking is an alert system. These aspects are still under discussion even as a government study in 2012 found a third of Delhi’s children had weaker lungs and four times the quantity of iron-laden macrophages than those from cleaner environs.

And for a city as polluted as Delhi, the authorities have even introduced retrograde measures such as incineration units that burn waste to generate energy. “Not only does this take away the livelihoods of those who collect and recycle our waste, the fumes from the burnt wastes also release dioxins and furans that cause cancer,” says Chitra Mukherjee, who’s with Chintan, a Delhi-based voluntary group. An operational plant in Sukhdev Vihar, in Delhi’s southeast, has been bitterly opposed by residents and waste pickers for years despite it being granted carbon credits.

But is the situation really that bad in Delhi that Chinese radical measures—such as capping cars or having days on which only cars with odd or even registration numbers are allowed—need to be replicated here? “We are not going as far as to say that we need such measures now, but if some disincentive measures are not adopted quickly, we will need to move to them,” says Narain. This story of alarming pollution is also not just Delhi’s bane. Cities across the country are growing chaotically, replicating the same urban disaster even if at smaller levels. “There are some smaller cities that are today even worse-off than Delhi,” adds Roy­chowdhury. These include places like Gwalior and Raipur that have higher levels of NO2 and PM10. “The fight does not have to be with Beijing; that ought to be our learning curve.”

There Must Be A Better Way