Amid footloose missiles and emphatic denials, the US may have lost too much in the battle for Iraqi minds 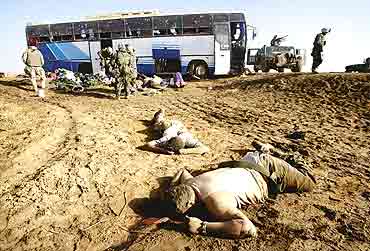 outlookindia.com
-0001-11-30T00:00:00+0553
The blood-red sky which hung heavily over the Al Shaab market was full of foreboding. Al Shaab is a tatty little corner of Baghdad; ordinary, poor, occupied by shopkeepers and car mechanics, a long way from the grand palaces and government buildings that dot the south bank of the river Tigris. They must have expected to escape the worst of the war. For two days Baghdad had been swallowed by the biggest sandstorm in living memory. The fine, ruby-coloured, choking sand was causing chaos in the city, day had turned to dusk and everything was breaking down. But it was still daytime and, until Wednesday, we had all assumed here in Baghdad that going outside would be safe. So Al Shaab was busy. Busy with shoppers and families and those with nothing to do but hang around the street corners and gossip about the American advance towards the capital. That too was being snarled up by the incredible blizzard.

My taxi driver told me that morning with a triumphant grin, as he drove me to the ministry of information, "The weather has come from God." But the missiles that hit Al Shaab an hour later probably came from Uncle Sam. And they were merciless. When I arrived the tree stumps were still ablaze. Car tyres, melted off their hubs like spent candles, were still smouldering on the road. And 17 of the people America says it has come to liberate were lying in pieces on the floor. Ambulances were screaming back and forth through the inky-red hue, carrying those that had survived through an apocalyptic scene. Fire-fighters sprayed what was left of the charred buildings, people threw their possessions on to the streets before they could be engulfed in flames and the crowds were growing.

At first they helped with the rescue operation, pulling their neighbours from mangled buildings, then as the emergency services took over their mood turned from shock to defiance and then anger. "Why are they doing this to us?" one man asked us. "We are just shopkeepers, there are no military targets here. I ask you Bush, why are you doing this, what have we done?" Another man stood with bits of shrapnel in his hand. "This stuff flew everywhere," he said. "Windows broke, walls disappeared, I pulled two people out of this building behind me but they were dead."

It’s important to add here, in the midst of all the health warnings carried by the media about despatches filed from Baghdad, this was not a staged media event. When we heard of the bombing we drove off on our own. What was on display here was honest, uncontrolled grief. This was a tragedy for the people of Al Shaab and a public relations disaster for the American administration. And they knew it. Their first response was, "It wasn’t us." Then the US Central Command admitted that they had been using ‘precision guided weapons’ to target Iraqi missiles "placed in residential areas". During the Pentagon briefing, Major Gen Stanley McChrystal said there was no proof that the US missiles were involved in the civilian deaths. Finally, by Thursday, they said it was possibly an Iraqi surface-to-surface missile that had gone off.

But all this was missing the point. The ordinary Iraqis in Baghdad, the ones whose hearts and minds they were trying to win over, blamed the Americans. And they dismissed the US excuses. "Remember Al Ameryah," they told me, "they denied that too." Al Ameryah was the bomb shelter the Americans hit in the last Gulf War, killing almost 400 people, mainly women and children. It still stands today almost untouched as a memorial to the dead and it still touches a raw nerve in the people of Baghdad. 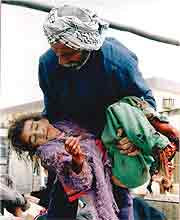 The day had begun with an attempt by the US to turn the tide in the propaganda war. There was fury in Washington after the broadcast on Iraqi state TV of captured and killed American troops. They ran all over the world but it was not just the reaction at home that was troubling the Pentagon. The impact on ordinary Iraqi people of the triumphant display of young scared American soldiers on their TV screens was immediate and, for the US, worrying. People here began to wonder if maybe the Americans were not as all-powerful as they had believed. With so much of the American war plan based on the premise that when the time comes the people will turn on the Iraqi leadership, this was something they had to stop. So they bombed the TV station, taking the patriotic displays of support for Saddam Hussein off the air for a few hours. But by mid-morning any gains they had made with a surgical strike on the TV station had been lost entirely by the carnage wrought on Al Shaab.

The next day the storm clouds had dispersed. The bombing had continued through the night but it was on the outskirts of town. We could hear it and feel it but we couldn’t see it. The low rumble of aircraft rippled across the city. The US and British were bombing the Republican Guard at Medina. Softening them up, to use the military phrase, for the push towards Baghdad.

But the city was almost back to normal. Traffic jams reappeared, some shops opened, people got on with their lives as best as they could. After 12 years of sanctions these people are resilient. Health minister Omeed Medhat Mubarak said the market bombing was aimed at breaking the spirit of the Iraqi people. "They are targeting the human beings in Iraq," he said, "to decrease their morale. They are not discriminating. Neither the Bush administration nor their bombs are ‘smart’." If the Americans want to win this war they’ll need to wise up soon. So far the targeting of buildings in this city has not been indiscriminate. Most of the things they’ve aimed at, they appear to have hit. When you consider the number of missiles and bombs that have landed in Baghdad, the number of deaths, whilst tragic, is still remarkably low.

But the key to this war does increasingly seem to be Baghdad and what the US forces do here will decide not only the fate of the present conflict but whether or not this capital will be governable by whomever the Americans plan to put in place. The Iraqi people share one very strong trait with ordinary Americans. They are deeply proud of their nation, its culture and its history. "We are an ancient country," said foreign minister Naji Sabri this week. "We were producing literature, art and architecture when Bush’s grandfathers were living in caves like animals." An honest sentiment, which while crudely put, does reflect the thoughts of many people here.

The Iraqis, whatever their views of the present leadership, do not want to feel that they are being re-colonised. After the events in Al Shaab, they’ll still need a lot of convincing that America really does have their best interests at heart.

Paul Danahar is the BBC’s South Asia Bureau chief based in Delhi. He is presently in Iraq running the BBC’s news coverage from Baghdad for BBC World Television, BBC World Service radio and all other BBC news outlets. He wrote this report exclusively for Outlook.