Panipat, that old crossroads, hosts yet another tragic drama 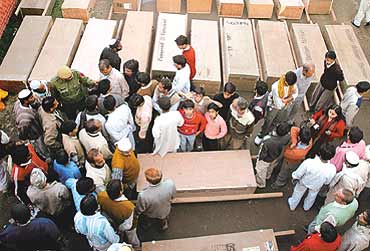 The charred debris of lives ended in a blaze tell their own sad stories. Colourful broken bangles, a torn red duppata, a small pink shoe with a teddy bear on it, tubes of fairness creams, packets of glittering bindis, paan leaves, and in the midst of all this a half-burnt poster of a smiling Shahrukh Khan. Common lives, simple dreams, a ghastly end.

The two blasts on the Samjhauta Express between Delhi and Lahore on February 18 claimed 68 lives, 65 passengers (all Muslims and mostly Pakistanis) and three security personnel. Ordinary passengers who paid Rs 167 on a ticket to travel across a border that has divided thousands of Muslim families in the subcontinent. The exact details of the numbers of Pakistanis and Indians killed have not been made public, but they were people with families on both sides of the border. Not high-end tourists, not professional seminarists or peaceniks. Just simple folk travelling with their children or parents after having got the much-prized visa to cross into India or Pakistan, depending on their citizenship.

The motive of those who planned the attack on Samjhauta Express is not hard to decipher—a bloody message opposing Pakistan foreign minister Khurshid Mahmud Kasuri’s visit to Delhi. Indeed, ghastly as the attack was, it seems to have not impacted the peace process—if you go by the noises made by the leaders on both sides. However, the blasts which took place at 11.53 pm, when the train was passing through Panipat district, have been an embarrassment for India, exposing the shoddy security arrangements on a highly sensitive train, a train that has been one of the few symbols of cooperation between two sparring neighbours.

One can only speculate whether the terrorists had a sense of history. Did they choose Panipat because it is synonymous with three historic battles? The train blasts certainly add another bloody chapter to the history of Panipat. As for the 600-odd passengers who boarded the train on Sunday night, a majority of whom were Pakistanis returning home, Panipat was just another dark stop on Indian territory.

Five innocuous looking suitcases, covered in blue denim and carrying explosives, would shatter the silence of that late winter night. Police sources say the suitcases were smuggled into the train at the crowded Old Delhi railway station by a group of seven to eight people. After planting them in different coaches, they apparently got off the train. They are believed to be part of a terror module in Old Delhi. "Only locals could have carried out the operation. The bombs were assembled somewhere close to the Old Delhi station. It is not feasible to carry so much explosive liquid over a long distance. The planning may have taken place in Kashmir, PoK or Islamabad, but the execution was done here," claims an investigating official. The best leads the investigators have now are two suitcases filled with explosives that failed to go off. They contain bottles filled with green liquid (kerosene and petrol), wiring, pipes and Orpat time devices. Besides, investigators are tracing at least four phone calls made from mobiles in the Old Delhi area after the blasts. These include a call to PoK at 4 am, one to Aligarh and another to Bikaner. Some calls made from Panipat to Pakistan are also being screened. 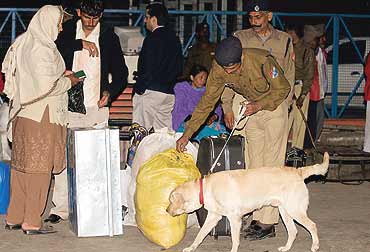 The theory about two people getting off the train minutes before the blasts at Diwana being the bombers has still not been proved. The statement of Mohammed Usman Sheikh, a Karachi resident, that he saw two men arguing with a Railway Protection Force (RPF) personnel to be allowed to get off the moving train, is being taken with a pinch of salt. Sheikh was said to be inebriated. Besides, he himself acted suspiciously as he had thrown one of the suitcases out of the train. Sadly, the RPF soldier, ASI Kashmir Singh, died trying to save people. He pulled out at least seven passengers from the emergency window, before going inside the burning coach to help more. Only his half-burnt belt and melted revolver were recovered. Moreover, a guard on the train, R.D. Singh, has also refuted the theory, saying that nobody could get off the moving train.

The security agencies were waiting for another eyewitness to recover from his burn injuries. Mohd Shaukat Rana, who suffered 20 per cent burns, was recuperating at Safdarjung Hospital. He is also said to have witnessed the argument between the two men and the RPF personnel. The investigators were not able to question him as he was in deep shock, having lost five children in the blast. But now nothing may come out of that either. On Thursday, the Pakistani government dispatched a plane and airlifted all its citizens injured in the blasts admitted in Safdarjung Hospital. "The victims cannot be further traumatised," said Tasnim Aslam, spokesperson of the Pakistan foreign office justifying the evacuation. "Why should anyone interrogate victims?"

Meanwhile, all the usual suspects are being named. On the basis of some intercepts made just before the blasts, the J&K police has been tracing the movement of commanders of Hizbul Mujahideen and Lashkar-e-Toiba. Though the intercepts were not specific in nature, the police is specially keen on tracing the movements of Hizb commander Abu Rasheed, who was travelling from Srinagar to Jammu on February 12, but was untraceable for a long stretch. He is believed to have made a trip to either Delhi or Haryana with explosives and weapons. Security agencies also claim to have intercepted a conversation between two LeT commanders about executing a plan. The call was made from a Delhi cellphone.

All eyes are now on the other train to Pakistan, the Thar Express, a weekly service between Jodhpur in Rajasthan to Khokrapar in Sindh. Interestingly, this train was resumed just a day before the Samjhauta blasts after a two-month stoppage owing to flooding in the region.

The worst part of the Samjhauta tale is that the ghastly incident was preventable. It’s been over 30 years since the train started in 1976 following the Simla Agreement, but the Old Delhi railway station still does not even have an X-ray baggage screening machine. Shockingly, there are no metal detectors, the passengers are never screened, relatives board the train along with passengers, sitting with them till the final whistle. The coolies walk in and out, no checks. Indeed, it is surprising the train ran safely for 30 years. It was the softest target possible for a terrorist attack. 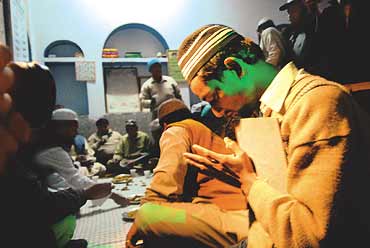 Relatives of the Pakistani victims pray at a mosque in Panipat

Investigations now have shown the clerks manning the booking counter had not even taken the trouble of noting down passport details of passengers they issued tickets to. Three of them have been suspended. A ticket examiner was also suspended for not doing his duty. A RPF man was also placed under suspension. But such gestures mean little when the security mismanagement is so colossal. "It is a huge security lapse," admits Union railway minister Laloo Prasad Yadav. Specially since the station manager of Old Delhi station, Arun Shukla, had received a letter on February 7, threatening blasts at railway stations if December 13 Parliament attack suspect Afzal Guru was not released. It was signed by the Jaish-e-Mohammed. The railway authorities claim they passed on the information to Delhi police who sat on it.

The Samjhauta Express had been under the scanner during the NDA regime when it was alleged counterfeit currency and other contraband were smuggled to India in it. The services were discontinued for over two years following the Parliament attack. The train service was resumed in January 2004.

The blasts however did not stop the next Samjhauta Express from leaving Delhi on Wednesday. When the Outlook team visited the station, all the security apparatus was on display. The platform was lit by halogen lights. Two door-frame metal detectors were brought in and put up there. But one of them did not work. Two brand new X-ray baggage machines were also brought in and displayed. But they too were not working. Only 50 verified coolies were allowed on the platform. All the passengers were screened and frisked with whatever equipment was working, or they were searched manually. At least an attempt was being made to look as if India did care about security on this train.

The passengers were in high spirits in spite of the disaster that had struck three days ago. A stoic Pakistan railway official, Syed Iqbal Ahmed, was returning home to Karachi with his family after visiting relatives in Amravati. He mourned those who had died in the blasts and then, typically, recited a few couplets about peace between the two neighbours.