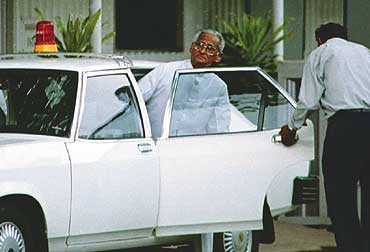 If Maharashtra governor P.C. Alexander has a friend, it is the Shiv Sena chief. It was Bal Thackeray's newspaper, Saamna, which forecast that Alexander would be offered an "important post" by deputy prime minister L.K. Advani, probably in his own office. But no such offer has been forthcoming. Alexander, who went to Delhi last week to submit his resignation as governor, has drawn a blank till now. His only consolation is that Thackeray has promised to support his nomination to the Rajya Sabha.

Less than a month after being abruptly dropped as the NDA's presidential nominee, a miffed Alexander struck back by resigning. The drama, timed close to the presidential polls, no doubt embarrassed the Vajpayee government. But it also fuelled speculation about whether the inscrutable octogenarian acted merely out of pique or whether he was bargaining for another plum position before his term came to an end.

Alexander's decision to call on the PM and deputy PM after submitting his resignation, instead of the President as per protocol, gave rise to speculation on this. At the outset, there were rumours that he was aiming for the vice-president's post, but these were scotched almost immediately. There are reports of other offers too: a lucrative UN posting, the deputy chairpersonship of the Planning Commission and a Rajya Sabha seat followed by a cabinet berth. But much of the rumours are emanating from Alexander's camp itself, with the hope that someone in the government listens.

Alexander had earlier enjoyed the reputation of an upright bureaucrat who was close to the Congress—the party had appointed him Maharashtra governor for his first term. But he later moved closer to the saffron brigade, so much so that his most vocal supporters today are the Sena's leaders. The governor's coterie even made it known to journalists in Delhi that the Sena and Sharad Pawar's Nationalist Congress Party (NCP) had promised him an RS nomination. The NCP has since denied this although Alexander got what he wanted: a message to the BJP that he wasn't short of political friends.

It's no secret that the 81-year-old governor is upset with the saffron party after it suddenly pulled the rug from under his feet in favour of missile guru A.P.J. Abdul Kalam. Indeed, sources say a humiliated Alexander wanted to quit last month itself when parliamentary affairs minister Pramod Mahajan informed him that the government had settled on Kalam instead. "If Alexander had quit at that stage, it would have created a sensation. So he was prevailed upon to wait," says a senior Sena leader. It is learnt that Pawar, who is close to Alexander, played a key role in convincing the governor to hang on. NDA emissaries like Mahajan and defence minister George Fernandes also called to mollify him.

Although he was appointed governor of Maharashtra by Narasimha Rao's government in '93, his second term came at the behest of the Sena-BJP alliance, in power then in the state. The Congress has reason to complain about Alexander's role at the time. In particular, it faults him for not pressurising the Sena-BJP government to implement the recommendations of the Srikrishna Commission report.

Although Alexander presided honourably over several contentious government formations in the state, his closeness to Thackeray led to much misgivings in state Congress circles. This is perhaps the reason why a strong representation was made by local Congressmen to Sonia Gandhi that she should under no circumstances back Alexander as the presidential candidate. Many Congressmen see Alexander as no more than an opportunist who switched sides to remain in power.It is only the Sena and the BJP which saw him as a "copy book" governor.

Now with Alexander set to relinquish his post on July 13, the Democratic Front in Maharashtra is in a panic over who will succeed him. Given the turbulent political situation in the state, the new governor could play a key role. For the BJP-Sena combine, it is a happy situation. The Centre can choose its own man, pass on the baton from one saffron supporter to another.