Author-activist Arundhati Roy gets her day in jail and a fine for contempt, sparking off a debate on the court's 'imperviousness' and perhaps a new Cause Celebre
Free Speech: Your Take 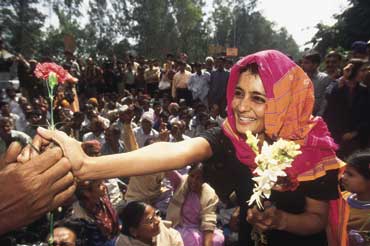 "I stand by what I have said in my affidavit," Roy stated categorically at a jam-packed press conference after serving her sentence and paying up the fine. "Anybody who thinks the punishment was a 'symbolic' one day in prison and a fine of two thousand rupees is wrong. The punishment began over a year ago when notice was issued to me to appear personally in court over a ludicrous charge which the Supreme Court itself held should never have been entertained. In India, everybody knows that as far as the legal system is concerned, the process is a part of the punishment." Not paying the fine would have got her three months in jail. But not paying it, said Roy, seemed like making herself "martyr" to a cause "that is not mine alone".

Roy's sentence had, in fact, become a Cause even as she was being whisked away to jail on Wednesday. Photocopies of a hurried scribble penned by her had already started pamphleteering—against the alleged arbitrariness of the Indian judiciary. "The message is clear," the scrawl said, "any citizen who dares criticise the court does so at his or her peril." Letters of protest from the world over, signature campaigns, sloganeering protesters rallying support, they were all there making it amply evident that the battle had spilled over into public arenas far removed from the world of nuanced legalese. Activist Medha Patkar, squatting outside the Tihar jail with a bunch of fasting Narmada valley residents, spelt out the issues at stake: "We are here because we feel our right to protest...to fight for our rights has all been threatened by this ruling." And a poster in the background fluttered: Free Speech, Not Frightened Citizens.