Can you really express your conviction through your confection? 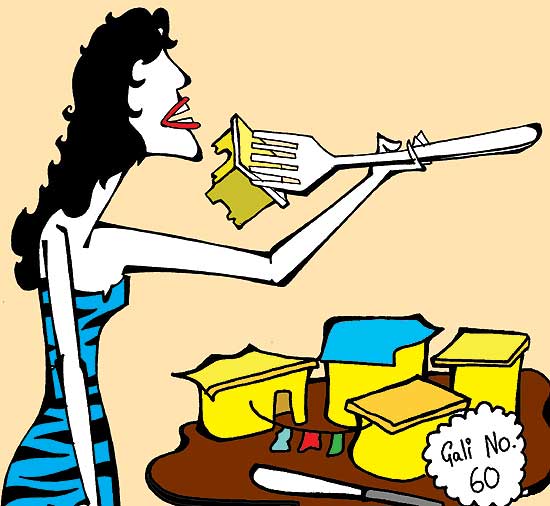 This week I heard that a well-known Mumbai actress received a birthday present from her husband, of a cake in the shape of a slum. That’s right, a slum. It is reported to have been created with shanties, pipes and a road sign with the celebrity’s age displayed as its “gali number”. The first reaction that went through my head when I heard this description was, “Imagine even pretending to eat clogged drains and sewage!”

The husband of the 60-yr-old b’day girl said the critics of his slum-shaped cake had no sense of humour. You can’t police such things. people should know if they’re using a symbol appropriately.

But the more I thought about it, the more difficult it was to say exactly why I found the idea nauseating. For instance, would it have been okay if something bitter and hard to chew had been created rather than a sweet and creamy luxury item? Or is it mean-spirited to assume that a slum would NOT be delicious to bite into? And by the way, is it inherently distasteful to think of eating up whole neighbourhoods? Or is it only distasteful when the neighbourhoods are not well-maintained? I can remember, for instance, that for my sixth birthday the party theme was clowns, with a cake to match. At my 10th, I helped decorate a cake in the shape of a medieval castle, with ice-cream cone towers. Does this mean that my family was grotesquely insensitive about medieval royalty and circus entertainers? Or is it okay to eat delicacies fashioned into symbols associated with wealth and pleasure while confectionery in the shape of destitute neighbourhoods must be condemned? And is that because we believe the destitution is unacceptable or our willingness to admit it exists that must be avoided at celebrations?

The more I thought about the thing, the more questions my mind generated. For instance, would someone, child or adult, who asked for leper-shaped desserts be considered depraved? Or would we think they were socially mature and responsible? Then what about pornographic puddings—would they be considered inappropriate at a child’s party? And does the shape of a birthday cake raise awareness? Or breed insensitivity? Would it be acceptable if, when a cake were made for someone who didn’t live in a slum, the dwellers had been invited in to eat it? Or is it so obviously offensive to make a dessert out of the visible symbol of the nation’s social inequalities that there’s no level at which inclusion becomes possible?

Is there anything that the revellers could have done that would have made it less objectionable, such as providing clean drinking water to a slum for a month? Or would only a full year’s supply make it okay? And would that be considered a responsible approach to lavish celebration or would it be tokenism to assuage guilt? Would it show a greater sense of humour and/or irony if there had been candles in the shape of slum-dwellers? And if it turns out that the slum-dwellers had benefited in the manufacture of the cake would that have made it all right? Or would the shape of the cake be okay if it had been made in order to be raffled and the ticket money given to the homeless?

The husband of the 60-year-old birthday baby is reported to have accused cake-critics of being humourless. The couple is known for their support to worthy causes and in particular to pavement-dwellers. So perhaps they should have responded to the criticism by gifting the residents of the slum closest to their residence a cake of matching size, but made in the shape of their own apartment building. Or—here’s a radical idea—how about cakes in the shapes of politicians, made to be eaten by their opponents? Religious icons too! And would that result in cake-eating becoming a politically charged activity with opposing parties ostentatiously gobbling up the religious icons of their enemies? Might we be entering an era of cake-wars? And would anyone who pointed fingers at those who objected to such activities be told that they lacked a sense of humour?

In the end, there’s no way of policing or legislating such things. People of conscience must know in their hearts whether or not they’re using a symbol appropriately. If not, it really doesn’t matter whether they are leftists eating slum-shaped cakes or anti-abortionists eating foetus-shaped eclairs. The moral of the story is, you can’t have your ideology and eat it too.

No Trouble In Gangtok