The Congress may be in power, but its prospects begin to seem dim and dimmer 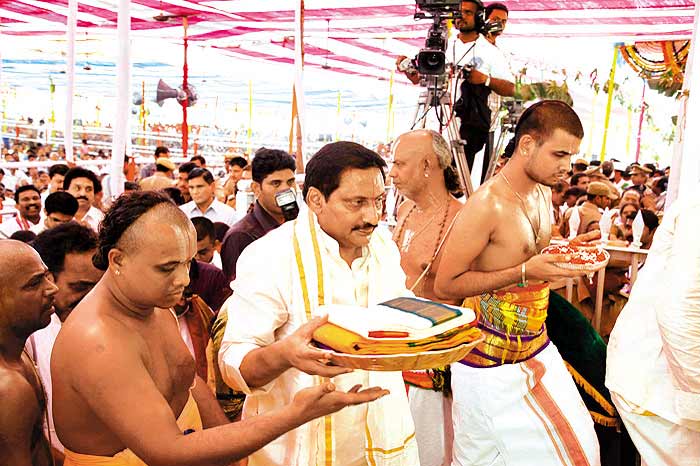 It has been the lifeline of the Congress, sending the largest contingent—33 MPs—to the Lok Sabha. The Congress unit in Andhra Pradesh has pioneered the most successful model of the capitalist-politician, providing manpower and money power to the party at the national level. But soon, it appears, there’ll be nothing left to give.

The post-YSR saga of the grand old party goes from tragedy to farce. Three years after YSR’s death the CBI chargesheeted his son, Y.S. Jaganmohan Reddy, in some corruption cases last week. This comes after the recent wipeout of the Congress in the bypolls in Telangana and Kovur. Its chances look as bad for the forthcoming byelections to 18 seats, forced by the resignations of MLAs who have since joined Jagan’s party, the YSR Congress.

Y.S. Rajasekhara Reddy, or YSR, who died in a helicopter crash, came back to power in 2009, when assembly and Lok Sabha elections were held simultaneously. The Telugu Desam had been reduced to five Lok Sabha seats. Now, the Telangana Rashtra Samiti (TRS) is in the ascendant in its strongholds, while Jagan’s party is growing in some others. The TDP too is gaining ground but looks like it may be losing momentum to Jagan. In Kovur, MLA Prasanna Kumar Reddy, who quit the TDP to join Jagan, won by a majority of nearly 25,000 votes. Hence, a seat which was traditionally the TDP’s went to the YSR Congress. This is a small but significant indication of the winds of change. At his ongoing ‘odarpuyatra’ in Guntur, Jagan announced that the byelections would be “a mini-election and signal the end of the Congress rule in Andhra Pradesh”.

Lagadapati Rajapoal, the Congress MP from Vijayawada, says regional affiliations in AP are all disturbed. “Nothing can be called a TDP or Congress bastion now. We cannot go by the past to predict future election results,” he says. The Congress would benefit, he thinks, if the municipal body elections were to be held before the byelections. “Jagan’s impact will definitely be curbed if he loses in local body polls,” he says.

Congress leaders from Telangana now feel that the CBI case against Jagan has generated sympathy for him. “We have created a platform where people are hero-worshipping him. The people of AP do not like anybody being suppressed. They immediately sympathise with such leaders,” says a Congress MP. Prof K. Nageshwar, political observer and MLC, sees Jagan as a bigger beneficiary than the TDP. “The traditional Congress votebank, which is now disgruntled with the infighting and dissidence in the party and also its treatment of YSR’s family, will automatically favour Jagan.” He expects Jagan to lead in the byelections, followed by the TDP.

Chief minister Kiran Kumar Reddy has not exactly endeared himself to the masses. Apart from his ongoing power struggle with PCC chief Botsa Satyanarayana, Kiran Kumar is seen as a man who sits on files. Following the arrest of two senior IAS officers in the Emaar and Jagan wealth case, bureaucrats are also scared of signing on anything. “He is not a team leader and not open to any ideas,” says former minister P. Shankar Rao, who was sacked for his frequent outbursts against Kiran Kumar. While Chandrababu Naidu’s strengths lay in administration and IT, YSR was seen as a pro-poor, farmer’s CM. But with Kiran Kumar, there is no popular agenda.

YSR’s image is all the more remarkable given the number of very rich MPs who came up under him. Lagadapati Rajagopal, G. Vivek, Madhu Goud Yaskhi, Kavuri Sambasiva Rao, Rayapati Sambasiva Rao and Rajya Sabha member T. Subbirami Reddy are among the wealthier of Congress MPs from Andhra Pradesh. Given the Telangana stir and the Jagan factor, the funding fount is likely to be overdrawn.

Andhra Pradesh is a high poll expenditure state, with MLAs spending an average of Rs 10 crore per constituency. In some, voters are given Rs 500-1,000. “If there are 1 lakh voters in a constituency, that expenditure alone amounts to Rs 5 crore,” says Nageshwar. Jagan. He was recently valued at Rs 365 crore and should therefore have no shortage of funds.