If the situation is allowed to drift, positions may harden 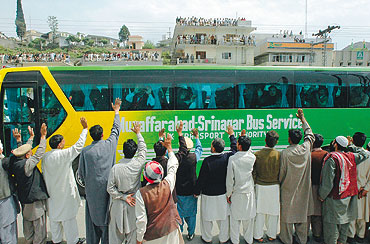 outlookindia.com
-0001-11-30T00:00:00+0553
Ultimately, it was the remark by foreign minister Khurshid Mehmud Kasuri that gave India the handle to remind Pakistan of its written commitment to fight terrorism. For, till then investigating agencies had no clear clues to even point a finger on a Pakistani connection in the blasts. Without Kasuri's remarks (see Summer Chills), it would have been difficult to even mention the Mumbai blasts and Pakistan in the same breath.

Kasuri's remarks, however, provoked ministry of external affairs spokesperson Navtej Sarna enough, for he described as "appalling" the linking of terrorist attacks "to the so-called lack of resolution of disputes between India and Pakistan". Sarna said it "appears to suggest that Pakistan will cooperate with India against the scourge of cross-border terrorism and terrorist violence only if such so-called disputes are resolved".

He further declared, "We would hope that the government of Pakistan rejects any such linkage," thereby giving Pakistan enough wriggling room to distance itself from Kasuri's statement. Sarna also called upon Pakistan to "take urgent steps to dismantle the infrastructure of terrorism on the territory under its control, act resolutely against groups and individuals who are responsible for terrorist violence and fulfil its solemn commitments enshrined in the India-Pakistan joint press statement of January 6, '04".

By harking back to the January 6 statement, New Delhi was drawing attention to the part where "President Musharraf reassured former prime minister Vajpayee that he will not permit any territory under Pakistan's control to be used to support terrorism in any manner". But the very next sentence of the statement says that "President Musharraf emphasised that a sustained and productive dialogue addressing all issues would lead to positive results". The Pakistani position is that CBMs alone cannot usher in a better relationship: for that to happen, dialogue has to be productive.

So far, the dialogue process—on a host of issues—hasn't yielded much dividends. The most prominent is Siachen, which both Musharraf and Prime Minister Manmohan Singh had singled out for speedy resolution: Pakistan isn't willing—even secretly—to declare its actual ground positions; Indian generals have told the political class that they will not be able to take back the positions if Pakistan does a Kargil in Siachen. Such is the air of sterility that Pakistan is yet to identify premises from which its consulate can function in Mumbai. Consequently, the Indian consulate in Karachi hasn't reopened, and the officials earmarked for deployment there have already been posted elsewhere after months of fruitless wait.

A political dialogue with the Hurriyat (Pakistan's preferred partners) has gone nowhere. There's a spurt in violence in Kashmir. Senior government sources say infiltration is up around 20 per cent compared to last year; the much-touted border fence has caved in under the weight of snow and developed gaps in Manda, Gurez, Macchal, Mender and Uri. Thirty command and control units of militant groups have taken to full-swing operations along the LoC. In the Valley, Chinese-made grenades are being hurled on tourists. The trademark Pakistani fingerprints in high-profile terrorist attacks have become harder to discern because staging posts have shifted to Bangladesh and Nepal. Attacks are being attempted in more places outside Kashmir than ever before.

It seems Musharraf is paying more attention to what the generals are saying: what have we got out of the peace process? From both perspectives—Indian and Pakistani—the view is the same: does it make any political sense to make diplomatic gestures towards each other now? But the longer the situation is allowed to drift, the harder the positions on both sides will become. This will only worsen the situation on the ground.