A regulator for the regulators? Where does that leave RBI? 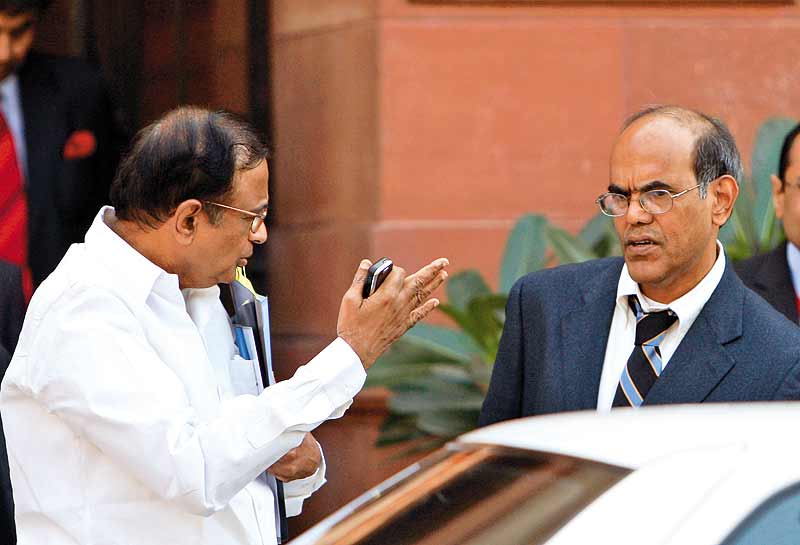 The FLSRC’s recommendations are sweeping, but will not be easy to implement

Brewing between Mumbai’s Mint Street (the Reserve Bank headquarters) and Delhi’s North Block (the finance ministry) is a turf war of mammoth importance. That’s not just because this finance ministry has been at odds with the central bank over its decision to keep interest rates high to fight inflation. Earlier battles too have gone down in history. For instance, former RBI governor Y.V. Reddy’s steadfast stance against the finance ministry push on capital account convertibility saved India from a worse fate in the 2008 global financial crisis.

“Colonial laws need to be changed...RBI must remain strong...there’s a lot of conflict within the RBI.”
D.K. Mittal, Former secretary, financial services

Such turf battles will only heat up further, judging things by the Fina­n­c­ial Sector Legislative Reforms Comm­iss­ion’s (FSLRC) recently rel­e­ased two-volume report submitted late last month. Produced by a 10-member panel hea­ded by Justice (retd) Srikrishna, this tongue-twister of a report puts the spotlight on the RBI’s multiple roles and powers, the need to resolve regulatory overlaps and how the customer needs to be the focus of financial regulation. To this end, the FSLRC has recommended sweeping changes (see box). And Prime Minister Manmohan Singh recently told CII that they were being “carefully considered” by the government.

At the very heart of the proposed FSLRC changes is the taking away of capital controls and debt management that currently lie with the RBI. Monetary policy will be its primary focus (with caveats). This is being seen in some quarters as a way to increase political control over the central bank. “We have concerns regarding debt man­agement, autonomy and so on,” says a senior RBI official off-the-record. “The role of the central bank being underlined by the government is a departure from current practice,” he adds.

“Taking debt management out of RBI’s hand is absurd...some other regulator may not do as good a job as RBI.”
Shankar Acharya, ICRIER

The FSLRC has sought the formation of a separate Monetary Policy Com­mission, with five external members selected by the government, apart from two members who will be from the RBI. This, say experts, will indirectly deliver greater control over the monetary policy to the finance ministry, which as an entity naturally has a political remit too. It is this issue that has alw­ays been the crux of the battle between the RBI and the finance ministry. “We are still living with colonial laws that need to be changed to reflect current conditions. Where RBI is concerned it should remain strong...at present there’s a lot of conflict within the RBI itself,” says D.K. Mittal, former secretary, financial services.

Will these changes suggested by the FSLRC strengthen financial services and lead to better consumer protection? The report itself contains four dissenting views on various issues concerning the role of the RBI. “It is more than a difference of opinion, which you can resolve. This is a difference on the fundamentals, so it’s become a note of dissent,” says FSLRC panel member Y.H. Malegam, past president of the Institute of Chartered Accountants of India, who feels the RBI’s control over capital flows and nbfcs should remain unchanged.

“It’s a roadmap requiring about 60 legislative changes...if you implement some, will it work? What do you prioritise?”
Subir Gokarn, Ex RBI deputy governor

The FSLRC report is ambitious, to say the least. Instead of working within the existing framework, it suggests an entire overhaul, including new bodies, new laws, roles, goals and objectives clearly defined. And it places the responsibility of mandating those goals and objectives, especially in the case of RBI, in the hands of the finance ministry. “It is a roadmap that requires around 60 legislative changes. The obvious question is, if you implement some changes and not others, will it work? What do you prioritise without doing harm?” asks former RBI deputy governor Subir Gokarn, currently director of think tank Brookings India.

Gokarn is reported to have not got an extension at the RBI, though widely tipped to do so, as his take on economic policy was not in tune with the North Block views. “The (monetary) committee framework will work best when it is universally perceived to be completely autonomous and independent,” says he. Replacing the current advisory committee—whose views are not binding on the RBI governor—with a voting committee (as in the UK) is fine in theory, but depends on who is going to appoint the members.

On another front, Shankar Acharya of icrier voices concerns about the recommendations to reduce the powers of the central bank and taking out debt management fund out of its purview, calling it “absurd to the point of stupidity”. “If implemented, the powers will go to the finance ministry or some other regulator who may not do as good a job as the RBI,” says Acharya.

“What the system needs is not an overhaul but better enforcement. It really needs accountability....”
Debashis Basu, Editor, Moneylife

Inter-regulatory battles have been cropping up over the last few years, given overlaps in the nature of products sold. Consider the IRDA-SEBI battle over ULIPS; or the war over pension products between the PFRDA and IRDA; or even forward market contracts between SEBI and the FMC. Clearly, it is the crossovers and the varied definitions that require this rethink on regulation. Though there is no clear sug­­gestion for setting up a super regulator in the report, many see a drift (or would like to) in that direction.

Debashis Basu, editor, Moneylife, says it is bizarre that nowhere in the FSLRC recommendations have they made out a case for a unified regulator. They have pointed out regulatory overlaps and so on, but those could also have been sorted out through a body like the HLCC (High Level Coordination Committee on Financial and Capital Markets) fairly quickly. “What the system needs is not a complete overhaul but better enforcement. It needs accountability for this massive architecture of products, distribution structures and so on that we currently have,” says he.

Experts agree that in a dynamic financial services sector, laws need review, because businesses, products and consumer expectations are constantly changing. However, in India, it isn’t thinking on reforming laws or regulation that is lacking, but the political will to see it through. Citing the case of the UK, Ashvin Parekh, partner, Ernst & Young, says, “With the necessary legislative changes, they empowered the fsa to get into arbitrages for all areas, be it areas of capital, products, distribution or investor protection.”

The FSLRC report comes when globally there is a move to strengthen the central bank with clear roles for regulators.

That said, there does exist an inherent risk of creating compartments within a superstructure. Twelve years after it brought in the new legislative structure, took away some of the powers from the Bank of England and created a unified regulatory structure, the UK has this month split the Financial Services Authority into two. In the process, the UK has once again vested more powers in its central bank to prevent another financial crisis. The commission also looked closely at the Australian model as well, which also has two components—the Australian Prud­ential Reg­ulatory Auth­ority and the Australian Securities and Investment Commission.

The Srikrishna panel report comes at a time when globally there is a move towards strengthening the central bank and laying out clear, defined roles for regulators with emphasis on coordination. Former secretary, financial services, D.K. Mittal, says personally he would have favoured having three regulators in place—RBI, SEBI and IRDA—instead of the seven suggested by the panel, but “with greater coordination”. “There are indentified functions for each regulator, which they should go ahead with and not create conflicts of interest,” says Mittal.

Given the implementation issues, this isn’t going to be an easy roadmap to follow. And that’s saying it mildly. None of the regulators are going to be happy about giving up turf. It goes without saying that steering the events will require enormous political will. With the general elections barely a year away, many feel the FSLRC report will languish in the dust. “It will have to be seen how the recommendations play out and what the eventual shape will be,” says the senior RBI official quoted earlier. The RBI, for one, will be closely watching this space.

By Lola Nayar and Arti Sharma