Sleeps With The Fishes

If you are in Kumbalangi, you are already caught in the net. And it tastes great. 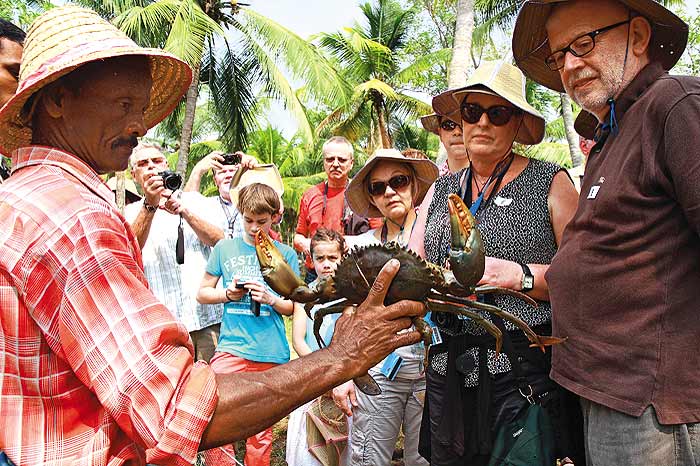 On solitary wooden stumps, jerking skywards out of the tremulous silver Vembanad lake, Little Cormorants sit drying themselves. The love call of the Coucal (‘whoop-whoop-whoop’) occasionally cracks the air, the only music you hear for miles around, before the rhythm of silence claims her space. Jose, the boatman, pushes the pole deep into the mud to gently-ever-so-gently thrust the countryboat forward to Kumbalangi village on the outskirts of Kochi, Kerala. If it’s village life you seek, it can’t get better than this.

We slow down to watch two local women waist-deep in water, Kochupennu and Prabha, catch fish—with their bare hands. They stir up the lake-bed with their feet and then swiftly grab the fish that emerge in the muddy swirl. The chatter and laughter never stop, though, as they bob up and down in the water, slipping whatever they catch, shrimps, catfish, anything, into their pots. Today’s been a lucky day, they say. The elder woman, Kochupennu, has been catching fish with her hands for over 30 years now. But not all days are so good. “Some days we catch nothing but I am used to it. The long hours in the muddy water, even the crab bites don’t sting any longer,” she laughs and says. We leave them to their wiles and move down the lake, mesmerised by the beat of the toddy-tapper high up on a coconut tree. (He beats the stem of the inflorescence with a buffalo bone before he cuts it and lets the sap ooze out into a pot tied below it.) “Ooooie,” Jose calls out and he slithers down and readily offers to sell us a bottle of sweet, fresh toddy. The Kumbalangi village is already up and about their business long before we arrive.

The village shore is embroidered with mangroves and Chinese fishing nets and the boat sneaks adroitly into a break. What hits you instantly is the warm wetness of the earth tempered with fish oil, which creates a unique smell so true to the wetlands of Kerala. It opens up infinite journeys into the past. We walk around to the crab farm at Kallancherry Island. It’s the only one in the village, although there are plenty of fish farms. As you may have guessed, life revolves around the aquatic world here. Everyone seems caught up in mining the water’s riches, fish, mussel, crab, it’s all up for grabs. If Kochupennu catches fish with her hands, others breed fish in huge fish farms that adjoin the backwaters while traditional fisherfolk depend on the nets—the Chinese fishing nets, the veeshu valas (throwing net), fishing rods, conventional fishing nets—to ring in their catch.

“Ooooie,” Jose calls out and the tapper slithers down the palm and readily offers to sell us a bottle of fresh, sweet toddy.

At the crab farm, Biju Joseph readily obliges us by pulling out a big crustacean. It isn’t stage-managed. One has to be adept at this, the crab’s pincers can cut your flesh badly. “The green crab is expensive and costs about Rs 1,000 per kilo. It’s not even available in the local market, as the catch is exported live to Singapore, Malaysia, Japan and Thailand. They sell it there as the fresh catch of the day,” says Joseph, who works for Kumbalangi Village tours. He’s caught a big one, a two-kilo squirming beauty. He quickly ties up the claws and holds it up for us to admire. “These crabs lay their eggs in the deep sea but the juvenile crabs come to the backwaters to grow. We catch them at that stage and raise them on the farm to the size we want.”

After the spiel, Joseph leads us over to a pond where he displays his veeshu vala (throwing net) skills. He pleats a circular net like you would do a sari, gathers the net together and stealthily walks into the pond and throws it in a discus throw motion. The net opens out and lands on the water like a blanket. He then pulls the attached draw-string which closes the net into a tight loop, trapping the fish. You can try your hand at it but it’s hard work and many an amateur has nicked his back. The net is not exactly light. Still, if you do manage to catch something, Kallancherry Retreat, lying bang opposite the farm, will fry your catch for you.

However, if you are a purist and prefer a rustic fishing rod or a bit of fly fishing with your own rod, then head to Michael’s Land on the far side of Kumbalangi. Now, you can do it by foot also, but it’s much easier to do the hop from the Kanamally jetty by boat. A warning: fishing at Michael’s Land can be addictive, sitting for hours with a good book or listening to music, waiting for the fish to bite. And they do bite with enough regularity to keep you interested.

The next stop is Kallancherry island. The sun’s beating down as we watch Monica and Vellamma beating the rutting coconut husks with sticks to pull out the coir fibre. Vellamma’s huge earrings (the ‘mekka mothiram’) glint in the sunlight. Her only lament is she can’t get new ones, for they just don’t make it anymore. The old order changeth, but some things are forever. The coir fibre is used to make all kinds of stuff, mats, chains, covers. Extracting the coir fibre itself, though, is still done in the time-honoured way, using a hook and wheel. We try a couple of lines but then leave it to the experts. And anyway, it’s time to sit down to a hearty meal at the Kallancherry Retreat. Karimeen fry, red rice and some other home-made delicacies set the tone for a leisurely afternoon. As they say, as you catch, so shall you eat.