Sleeping With The Evil

A direct result of Indian polity or a devil despoiling our lives, it's a plague we must deal with 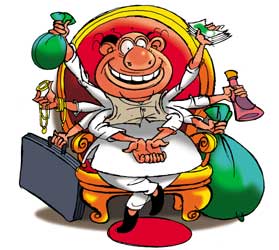 outlookindia.com
-0001-11-30T00:00:00+0553
Mahatma Gandhi would have liked to wish it away: "Corruption and hypocrisy," he told the press rather wistfully in 1934, "ought not to be the inevitable products of democracy." But nearly 70 years later, corruption and its handmaiden, hypocrisy, are faring much better than our democracy. From the farmer and shopkeeper who steal electricity to the housewife who bribes the electricity and telephone department workers to reduce her bills to the neighbourhood policeman with his hafta charges to the army officer who brokers deals for a bottle of Blue Label whiskey and, of course, the politicians, Indians are redefining the meaning of corruption and honesty. Along the way, we have tenaciously held on to the distinction of being a top ranker among the world’s most corrupt nations, coming 22nd last year in Transparency International’s annual index. As cpi national secretary D. Raja says, "Corruption, like God, is everywhere."

"I sometimes wonder who is corrupt," says a young sub-inspector who joined Delhi police seven years ago. "Is it me, because I’m the police, or the class 4 employees at the mortuary who demand a bribe from me for carrying out a body from the mortuary, or my boss who takes the official car for private use or the dozens of people who come to the police station everyday offering to pay us to do their dirty work for them. We are all corrupt, one way or another. You can’t fight the system." Agrees another sub-inspector, Harisingh Chauhan (not his real name). "All of us have to pay bribes, even policemen. Last week, a cpwd electrician came to repair the line in my house and asked for chai-pani kharcha. I tried to offer him a cup of tea, but he wasn’t satisfied till I paid him Rs 10."

Policemen are not the only government employees who’re getting a taste of their own methods. According to a recent exit poll conducted in six cities (Delhi, Lucknow, Chennai, Hyderabad, Pune and Ahmedabad) by the Centre for Media Studies, over 40 per cent of government employees admit to having paid a bribe to employees from other departments to get their work done. Nearly half of the 5,400 people surveyed in the six cities admitted to paying bribes to expedite their work, while one-third confessed to having used middlemen.

So rampant is corruption within and outside the government that many complain that they are now paying more than they receive under the table. "The honest man is a frustrated person," points out D.P. Singh, a clerk in the ministry of defence, who wishes he was big enough (an officer) or in the right place (procurement) to make enough money for his needs. "All we get is the occasional employee on the verge of retirement who is anxious to get his pension on time—a couple of thousand, that’s all." Agrees sub-inspector Chauhan: "Look at these foreign tourists, for example. Many of them are ordinary public servants like us—teachers or postmen. But I can’t even hope to travel to Shimla, let alone Japan or America on what I make. The only corrupt policeman is the one who gets caught, and there have been cases where policemen have been charged for taking Rs 10."

As sociologist Ashis Nandy points out, Indians are uncomfortable with the concept of morality. "We get moralistic only when someone is caught. Otherwise, many of the corrupt represent what we admire. Remember how vociferous the same politicians were a few months ago when the cricketers got caught." Says sociologist Dipankar Gupta, "The middle class is severely compromised, depending as it does on political patronage for climbing up the professional ladder. They can’t act against corruption because they themselves have entered into a patron-client relationship with politicians. Nor do they have the moral stamina for it." Agrees Kuldip Mathur, director of the Centre for Studies of Law and Governance in New Delhi’s Jawaharlal Nehru University, "We’re all involved, although we love to take a holier-than-thou attitude. We deserve the government we have because we have not been able to take collective action to cleanse the system."

We are angry at ourselves, because we are all guilty," Nandy says, adding however that there is a big difference between the corruption of ordinary people and that of bureaucrats, politicians and businessmen, for whom it’s a basic ingredient of their professional culture. "When I pay the linesman Rs 50 to get my telephone working, I am not corrupt in the sense of siphoning funds to Swiss banks. I do it under duress, like when you pay for a railway reservation out of turn. You need to get somewhere and can’t afford plane fare, so what do you do? We feel dirty, but we’re coerced into corruption."

Nor is Shiv Visvanathan, one of the two editors of Foul Play: Chronicles of Corruption, ready to feel guilty. "I may be wrong to offer a bribe to a rail conductor, but I have no alternative. I have to pay speed money unless I want to get stuck in bureaucratic delays. And for people like a rerhiwala, it’s a question of survival. If he doesn’t pay the hafta, how will he survive? The country is undergoing deep changes, with criminal networks emerging in different fields such as real estate. If everything gets bracketed under corruption, it becomes almost impossible to fight it. There has to be a gradient for corruption, separating the criminal acts from those of bare survival."

Social scientist Harsh Sethi agrees there must be a distinction between corruption and surviving inefficiency. "There are those who exploit shortages for their own gain, such as the railway clerk or the linesman and those who create those shortages, such as bureaucrats and politicians. Greater transparency and accountability will take care of that kind of corruption." Sethi, the other editor of Foul Play, points out that only some kinds of corruption rouse the moral indignation of the people: "Making money from stealing bacchon ka dudh is different from making money out of a petrol deal." The anger among people is evident. "OK, corruption is in our blood," says lic agent Mandhir Wasan, "and the netas are part of us, but my paying a clerk chai-pani kharcha to get my file moving is not the same as a politician playing with the country’s national security."

So what if we’re corrupt?" concurs D.P. Singh, "our leaders have to be exemplary. They have to set the moral standards, not us. If they reform, sab theek hoga." Like Singh, nearly half the people surveyed in the cms poll blame politicians for corruption in the country. Politicians, too, blame themselves. "No country, however corrupt, deserves a government like ours," says cpi(m) parliamentarian Somnath Chatterjee. Admitting that a corrupt system has its impact on party morality, Somnath insists however that "the politician has a greater responsibility than others to stay above personal gain." Adds D. Raja: "I don’t buy the argument that politicians are corrupt because they are part of a society that is corrupt. We communists are also part of society and we are neither corrupt nor want to be corrupt. Money becomes important only when political parties have no ideology or programme."

Concurs Congress leader A.K. Antony, "Politicians have no business to stay in public life if they buckle in to a corrupt system. Corruption is a worldwide phenomenon but a politician has to have the moral fibre to resist temptation. Otherwise, he is unfit for public office." But Dipankar Gupta believes otherwise: "Politicians enter politics in order to become corrupt. If they don’t practice corruption, how will they support their roles as patrons? You will find that each of these politicians caught for corruption have their group of supporters, who rely on his patronage."

So can anyone clean up the system? "I doubt anything can ever be done about it," says a despairing Patricia Shenoy, who runs her own bakery in Delhi. "All we can do is somehow survive the system and that’s what I would advise my children too." Even prime ministers have pleaded helplessness. Over three years ago, then PM I.K. Gujral publicly confessed that he was "helpless" to control corruption. But, argue politicians like Somnath Chatterjee, no government so far has made even a feeble attempt to fight it. There’s only been rhetoric. "People were being told there was a change and they believed it, which is why their shock is greater now," he explains.

"The thing to do is to cut down the rhetoric and do something, anything," says Visvanathan. "Whether it is reforming the criminal justice system, or appointing housewives and retired officials to monitor the neighbourhood police station, it’s time we stopped flogging ourselves with guilt and concentrate on cleaning up the system." Mathur adds a final word: "People are changing. As democracy matures, they’ll want more transparency and won’t be satisfied unless the system changes". Says Dipankar Gupta, "The only hope is the expansion of the middle class, that’s what happened in the West—as long as the middle class remained small, there was rampant corruption, once it expanded and jobs and services improved, patronage died out." Gandhi’s dream, then, may be round the corner. Or is that past the bend?